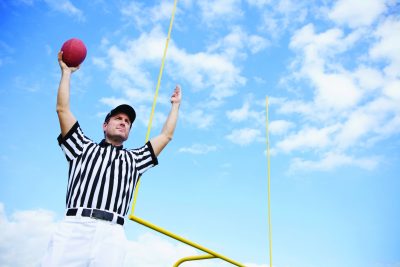 No more of this “exhibition” game stuff where the win-lose records are not affected. Teams will wind up 1-0 or 0-1 at the end of the evening this week.

Speaking of practice games or exhibition games, the Lennard Longhorns looked respectable (at least after last season when they were 0-10). Both East Bay and Riverview showed only that they have a long way to go before achieving respectability.

Both East Bay and Riverview took it on the chin without a face mask last week, although both were whipped by what appear to be pretty good teams going in to 2018.

The East Bay Indians, at home, did not do much offensively and could not stop the dreaded and perennially powerful Lakeland Dreadnaughts on defense either, falling 43 -0. Coach Frank LaRosa’s squad will be looking to take out their frustrations on the Riverview Sharks this Friday night as the two neighboring schools clash.

Riverview is looking to bounce back from a drubbing by Bloomingdale. The Sharks did manage 14 points, but that was not much consolation as the Bulls outclassed Riverview 56-14 at Valrico.

Lennard experienced what many coaches and fans call “kissing your sister.” The Longhorns looked good in spurts on offense and defense and fought Southeast High of Bradenton to a 13-13 tie.

The opposing coaches, Lennard’s Matt Kitchie and Southeast’s Bret Timmons, teammates many years ago at Southeast, saw enough after a three-overtime marathon and agreed to end it right then and there, and call it a draw.

Now, the Longhorns take a newfound offense and stingy defense to Tampa to face Blake Friday night, seeking a win for the first time in two seasons. Enough of this peck on the cheek from your sister!