The standard weather forecast in August is: “Light winds and chop, and sunny or partly cloudy in the morning. Wind and chop picking up in the afternoon with a 50-percent chance of thunderstorms.”

We are a tropical region in the peak of hurricane and thunderstorm season. The weather can quickly turn a charter fishing captain from a hero into a zero. Fortunately, with today’s radar technology you can avoid storms more easily. You can also hang in a fishing spot longer.

When storms approach in the summertime some important changes impact the fishing. One thing that happens is the temperature changes. When the temperature drops, the bite normally turns on. Start chumming, put your sandwiches away and cast that bait. 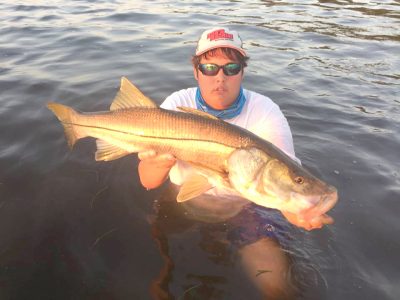 When storms roll in and the sky turns from sunny to overcast, look to anchor in ambush spots. Fish will venture out of previously shady locations and feed out on the flats, oyster bars and river mouths. When the wind shifts, reposition your vessel to get the wind at your back for a longer cast so as not to spook the game fish.  Once the storms turn the sky overcast, you can work your live or artificial bait more aggressively because the game fish coming out in the open to feed are more willing to chase and are much less lethargic than they were when it was sunny.

A heavy downpour will also cool the water temperature quickly. I like to fish out in wide open spaces when it’s raining.  I also like to cast toward banks and mangrove edges where crabs, bugs and other food chain species can be washed into the water from the rain. That’s where game fish are on standby to ambush. Snook, redfish, trout, flounder, tarpon, mackerel and kingfish all seem to feed more aggressively with an approaching storm.

I will hang in there and fish in a storm or an approaching storm, but the first sign of lightning and I’m out of there. Many times in August my family and I will spend a few weeks in the Florida Keys lobster diving and spear fishing. When you’re underwater watching nature and the sky gets dark and the wind starts howling, you can see crustaceans and fish come alive, they exit their holes and come out to feed. Use the storms to your advantage this August.

For a charter with Captain Joel Brandenburg, visit www.anabananafishing.com, or call 813-267-4401.