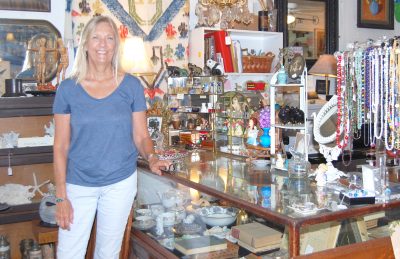 CARL MARIO NUDI PHOTOS
Jane Cofer, owner of Zula’s Antiques, 441 U.S. 19, on Terra Ceia Island, has been in the antique business for about 20 years.

About a quarter-mile after exiting the Sunshine Skyway Bridge at U.S. 19, the first business on the right going south is in a cottage-style house with a memorable name.

Zula’s Antiques sits back off the busy highway, but the bright blue building attracts enough attention to draw in customers.

“I named it after my mother,” said Jane Cofer, who opened the business in 2005 with Carol Adams.

“We were trying to think of a name,” Cofer said. “Carol’s mother’s name is Jane, and we couldn’t name the store Jane’s because that’s my name.

“My mother’s name is Zula, so we went with it,” she said.

Adams, who retired four years ago, and Cofer rented space at antique malls before opening the business together at 6441 U.S. 19, on Terra Ceia Island.

“The antique mall is nice because you don’t have to be there all the time, but you don’t make as much money,” Cofer said. “We decided it was better to have your own business, and the opportunity to open this place came along.”

She owned the property on Terra Ceia Island, and a friend had a building in the 1600 block of Fourth Street in Palmetto that was going to be demolished.

“I knew a building mover so we moved it,” Cofer said. “It took two weeks to prep it, and two days to move it and four years to get it up to code.” 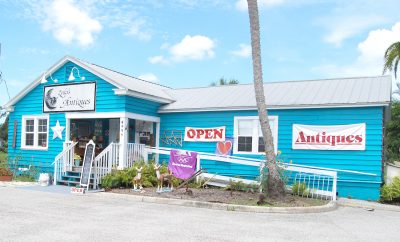 The blue cottage that houses Zula’s Antiques, 441 U.S. 19, was moved to the Terra Ceia Island location from Palmetto and dates to about 1915.

The frame house was perfect for an antique store since it was built around 1915.

“It was a lot of work, and it took us a long time,” Cofer said. “But we made the decision, and we were excited because it was great to be out on our own.”

“A lot of friends drove out. It was quiet, but good,” Cofer said.

The business grew over the next several years.

“It was great when we first opened, then 2008 came and everything went downhill,” she said. “(The recession) hit us pretty hard.

“The economy got so bad, then the (Deepwater Horizon) oil spill (in 2010) kept the tourists away,” Cofer said. “That hurt us because we do a lot of tourist business.”

The tourist season from January to March is important for her business, she said.

But every year since 2010 has been getting a little better, Cofer said. 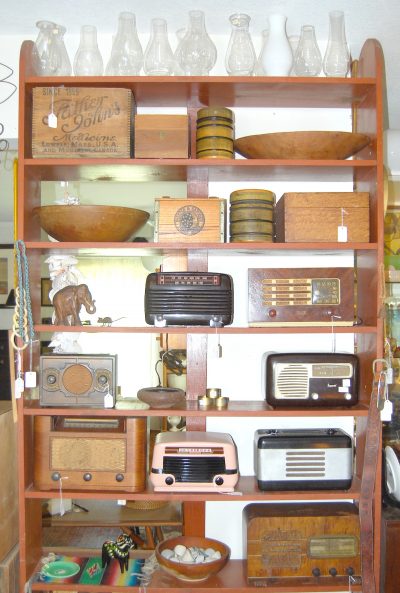 Along with quality antiques, customers can find vintage items, such as these radios from the 1940s and ’50s at Zula’s Antiques.

Cofer said the antique business has changed over the last few years with the internet.

With websites such as eBay and Etsy, people can find what they want online.

“As the antiques and collectibles industry becomes more niche market-focused, individual seller websites are growing,” according to Harry L. Rinker in an April 17, 2017, article on the Collectors Journal website www.collectorsjournal.com.

“Also, a lot of young people don’t want to have things that collect dust,” Cofer said. “The days of cup and saucer collections are gone.”

She said people still collect, but go more for the vintage items.

“Younger people go for something different,” Cofer said. “For them, they look for the unusual; something youthful, like furniture or vintage kitchen items because they will use it.

“Or they buy stuff that they can decorate their homes with, like art pieces,” she said.

Cofer, who has been in the antique business for about 20 years, said she gets most of the items she sells from people who call Zula’s Antiques because they are moving, downsizing, or someone died.

“And a lot comes through the door,” she said. “I don’t have to travel anymore to auctions, although that was fun when I was younger.”

Cofer got the antique bug when she bought antique furniture at a Sarasota shop after she first got married.

“It appealed to me,” she said. “Once I started buying antiques I couldn’t stop.”

To her it’s the quality of the antiques that really attracts her.

“It’s the best craftsmanship,” she said.

Cofer’s personal favorite antiques to collect are unpretentious, yet classic.

“I like boxes and bowls and pottery,” she said, and with owning an antique shop she does not have to clutter up her house.

“At home I keep what I really like,” Cofer said. 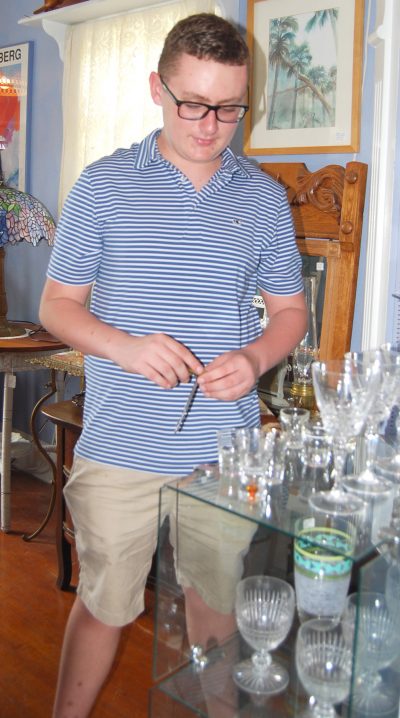 This is the second summer Sam Cotter, a sophomore at Saint Stephen’s Episcopal School in Bradenton, has worked at Zula’s Antiques, 441 U.S. 19, on Terra Ceia Island, helping to clean shelves and keep the displays in order. This is a perfect job for Cotter, who likes antiques and collects old electronics and VHS tapes that are autographed.

Customers will find shelves of glassware and pottery, a variety of art and wall décor, fine antiques and vintage collectibles on a walk through Zula’s Antiques.

“We have something for everyone,” Cofer said.

Also from October through April, customers can stop by Rosie’s Produce Market in the out building next to the antique store.

Rosie McNeill, who comes down from Michigan for the winter, sells fresh produce that she grows on her property in Rubonia.

She also sells cheese and honey.

“As soon as Rosie comes down she starts planting,” Cofer said. “She’s been doing this for four years.”

Antique and vintage outdoor furniture and other items, such as old wagon wheels, that Cofer has in the outbuilding create a great background display for McNeill’s fresh produce.

For more information on Zula’s Antiques, call 941-729-9500, or visit their Facebook page at www.facebook.com/zulas.antiques.33.