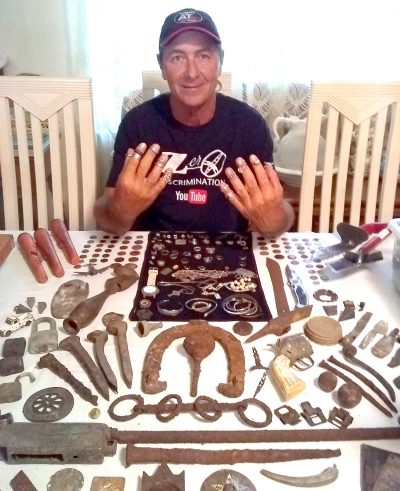 Mark Pettit, of Riverview, has been a metal detective for more than a decade. Just this year, he’s found 20 gold rings. He keeps everything he finds unless he can find the original owner.

Mark Pettit has box after box stacked in his bedroom. He’s on the lookout for a new curio cabinet or two in which to display their contents — hundreds of pounds of old hooks, keys, buttons, gold rings, Indian-Head pennies, Civil War bullet casings and much more.

He’s got a bug he can’t shake. He’s got a full-blown case of “metal detectorism.” He can’t get enough. Every chance he gets, he dons his headphones and begins perusing empty lots, beaches and parks seeking new treasure with his metal detector.

He sells none of it, but his girlfriend, Lisa Rose, has come out on the winning end, getting most of the gold rings, including an 18-karat white gold ring with nine princess-cut diamonds in it, equaling one carat.

When he can, Pettit works to find the original owner, but those opportunities are scant, he said.

Mostly he just displays his finds in his own house for his own entertainment. And on Riverview Facebook pages, where he met up with Lynn Brown Ciesta, whose son Dylan was interested in metal detecting.

“I’ve got competition now,” Pettit said. Dylan, who is autistic, often follows metal detectives along the beach on regular trips to the coast, his mother told Pettit. She inquired what it would cost to get him a metal detector.

“I had won a beginner detector I had never used, so I told Dylan’s mom I wanted to donate it to him to take to the beach and find his own treasure. I gave him the detector and sand scoop. I gave him a little training, showed him how to use it. That was just a couple of weeks ago. Now, I’m waiting for him to post what he found.”

Pettit’s obsession started more than a decade ago when he found a metal detector at a yard sale and tried it on and off until someone stole it.

“I moved to the Florida Keys and met another treasure hunter named Carl Fismer, who dived on the Atocha for treasure.” The Nuestra Señora de Atocha was a much sought-after Spanish ship that sank off the coast of the Florida Keys during a hurricane back in 1622, filled with what today amounts to a multi-million-dollar treasure. Its location and excavation are credited to treasure salvor Mel Fisher, his family and employees. 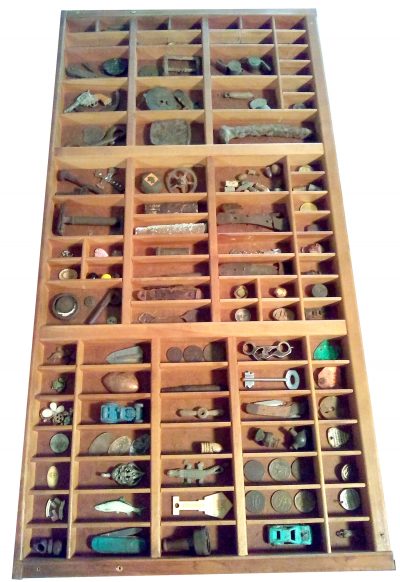 “We became friends, and when I moved to Tampa I met up with him here. He actually donated a couple of his old detectors to me. That’s when I actually really started getting back into it,” Pettit said.

“It just kind of snowballed from there. Every chance I got to go to the beach, I was doing a lot of detecting. I got a couple more detectors and started digging around the Riverview area where people gave me permission to dig.

“Finding the really old stuff was one of the coolest things ever,” he said. “Every piece that you find has a story. Every time I find something I wonder who lost this, or if it’s old. I kind of go back in time, saying ‘I wonder what they were doing when they dropped this or made that.’ It’s hard to explain. I just enjoy it. You never know what you are going to find.” 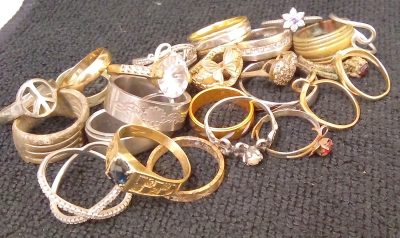 He finds plenty of jewelry, mostly gold and mostly men’s wedding bands. “If it is marked, I will try to contact the owner and return it if I can.”

The first find Pettit ever made was when he lived in Hudson. It was a fake diamond ring. He found it in his own back yard. But that was enough to get him hooked on the hobby, he said. “That’s what kind of got me going. You’d never have known it was there.” Most things he finds are three or four inches under the soil, he said.

This year, alone, he has found 20 rings, he said. “I have had people contact me and asked me to search their yard or whatever and I will do that for no charge. I was successful a couple of times. I do post everything I find. Someday, maybe somebody will see it and it will be what they lost.”