Parrish Fire District officials know the mostly rural character of the area of Manatee County they cover will be quickly changing in the near future.

To prepare for the thousands of homes the county has already permitted to be built in the district, the fire commission and department leadership are being proactive in planning for a new fire station and the personnel to staff it. 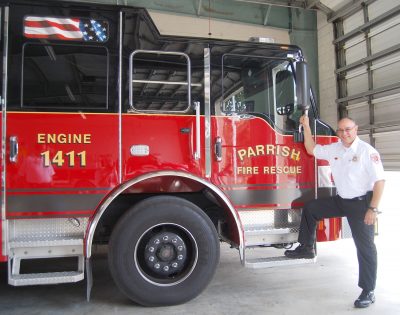 Bailey took over as fire chief on Jan. 1 after working along side former Fire Chief Michael Johnson for three months.

“We’re working with the county and the developers now to establish where the growth of the area will be so we can plan for the fire department expansion,” said Bailey, who came to the Parrish fire department from East Manatee Fire Rescue.

“We’re not sitting on our hands waiting for the development to happen,” he said.

The Parrish Volunteer Fire Department was founded in the late 1970s, but with the signs of population growth starting in the area, the Florida Legislature created the Parrish Fire District in 1984.

The district covers about 98 square miles of the mostly rural area around the Parrish community, and with a mutual aid agreement with the Duette fire department, that area expands to about 200 square miles.

Fire Station No. 1, at 12132 U.S. 301 N., in Parrish, was built in 1998, the same year the district transitioned from being an all-volunteer department to hiring a fire chief and three full-time firefighters.

They still depended on a volunteer force to cover all emergencies.

Since 1998, the department has increased to 10 full-time officers and firefighters, plus the chief.

The expansion plan for the Parrish Fire District was first developed in 2008, and the anticipated growth was in the Moccasin-Wallow/U.S. 301 area, Bailey said.

But he emphasized that any new fire station will be based on where the development will be.

According to the new five-year plan implemented this year, the district plans to begin the design process for its second fire station in the 2019-20 fiscal year.

In looking toward staffing the growth of the department, Bailey and his leadership team have instituted the Parrish Reserve Responders Program, a hiring system established in other fire districts around the nation. 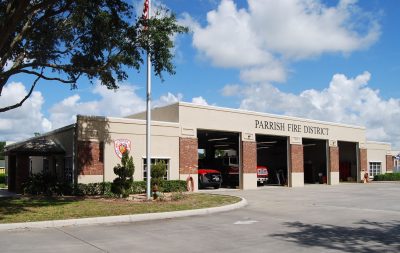 The reserve program is a recruitment tool to help in the hiring and retention of firefighters.

Applicants to the reserve program have to be state-certified firefighters and emergency medical technicians.

Where the department still has a volunteer force, the reserve responders are paid and are required to be at the station on a scheduled basis.

“Having the reserve unit allows someone to be at the station for other calls if the crew is out on a fire,” Bailey said.

This gives the department the latitude needed to respond to emergencies and still cover the station, he said.

“As we grow we’re looking to have a ready pool of applicants,” said Parrish Fire District Division Chief Michael Williamson.

The reserve program provides opportunities for people who want to be a firefighter to train and respond to emergencies while they wait for an opening for a full-time position at the department.

“We’re giving them an opportunity to be part of the Parrish fire department,” Williamson said. “And when they’re hired we can skip the orientation process.”

For Jacob Weinberger, this program was just what he needed to fulfill his goal of being a full-time firefighter.

He started in the program about three months ago.

Since graduating from high school in 2015, the 19-year-old has completed the fire school at Manatee Technical College in 2016, attended the week-long Great Florida Fire School program in Fort Myers twice, and went to the Fire Department Instructor Conference, a yearly gathering of firefighters and officers in Indianapolis.

“I’ve already booked for this year’s fire school in Fort Myers,” Weinberger said. “I was the first to book my reservation.”

He heard about the reserve responder program from a friend and applied.

He was volunteering at the Trailer Estates Fire Department for about nine months, but was looking for a department that handled more emergency calls.

“I couldn’t be happier,” Weinberger said. “I get to be part of the growth of the department.”

His probation ends when he finishes all the qualification tests. 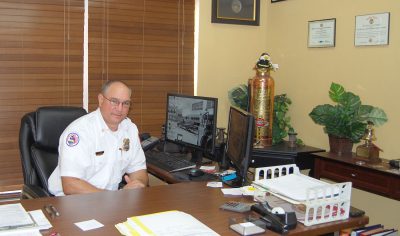 Parrish Fire District Chief Stacey Bailey sits in his office at Station No. 1. Bailey started Jan. 1 to implement the department’s expansion plans for the expected population growth in the area.

“The only task left is to become proficient in driving three trucks,” he said.

Weinberger will then be a reserve responder, and when the department starts hiring he will be eligible.

He said he was studying and working hard to accomplish all the required tasks.

“I don’t want to give them any reason I wouldn’t be the top applicant,” Weinberger said.

Bailey had the same drive to be a firefighter when he started as a volunteer at the Bradenton Fire Department in 1993.

When he graduated from high school he took sheet metal classes and started working in construction.

His uncle Vernon Horne was the fire chief at Bradenton Fire Department and “he inspired me to look at being a firefighter,” Bailey said.

“He said he couldn’t hire me at the Bradenton department because I’m his nephew, but he told me to go out to see Henry Sheffield, who was at the time the fire chief at the Braden River department,” he said.

Bailey was hired at Braden River in 1999, but continued to volunteer at the Bradenton department.

“I wanted to immerse myself in it,” he said.

The chief said it was the appeal of what firefighting means to the community that drew him to the service.

“I was working construction at the time, and (being a firefighter) was something completely different and a way to be involved with the community,” Bailey said.

The Braden River fire department was renamed East Manatee Fire Rescue in 2005 and where Bailey rose to the rank of Fire District Battalion Chief.

With Bailey’s 25 years of experience in fire departments, he brings to the Parrish Fire District ideas and practices he has used before. 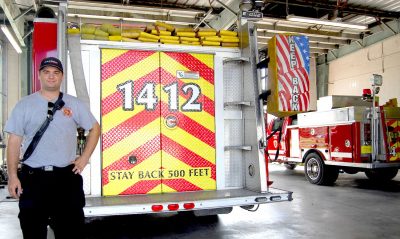 Jacob Weinberger, 19, stands behind one of the trucks he has to learn to drive to complete his probation in the Parrish Fire District Reserve Responder program. When Weinberger qualifies to become a reserve responder he will be in line to be hired as a firefighter at the department when there is an opening.

“It was hard to leave East County because I have a lot of friends there, but this job had exactly what I experienced at East County,” the fire chief said.

“When I was with East Manatee I was involved with the planning for growth in the department,” Bailey said. “I also prepared budgets, handled the training of firefighters and made shift schedules.

“Now Parrish is experiencing the same type of growth, and we’re trying to avoid the pitfalls at other departments when they were experiencing their expansions,” he said.

Williamson agreed the department has to be prepared for the growth in population.

“We’re merging growth and professional development of our firefighters at Parrish Fire District,” he said. “And Chief Bailey is bringing a professional business model to this department.”