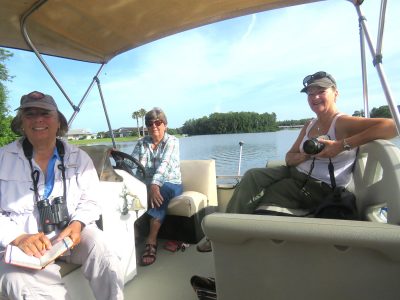 The National Audubon Society has a real interest in the birds nesting on the islands of Sun City Center lakes. As the society’s representative, Ann Paul’s interest was piqued when she learned recently about the nesting areas in Sun City Center. That’s because she is overseeing a survey of 70 or so islands in the region she oversees that stretches from Citrus to Charlotte counties, including those in Hillsborough County and elsewhere along Tampa Bay’s shoreline. This region has the largest bird population in Florida, besides the Everglades.

The information Paul gleaned from her survey of the SCC islands will be included in the Audubon Society’s quest to determine overall populations by learning which coastal birds are nesting where.

“Populations of wading birds in Florida are under threat because of population pressures, and a number of them are listed as threatened. Birds cannot nest where animals can climb trees, and non-threatened nesting areas are pretty hard to come by. If we know where they are, we can help protect those areas and help the birds be productive. We want to ensure they will be there for our children and grandchildren,” Paul said.

Paul is the 2018 winner of the annual Theodore Roosevelt Hillsborough Forever Conservation Award. The award’s namesake, the 26th U.S. president, was known for his conservation efforts. The county commissioners present the award to a person or group dedicated to preserving the county’s natural resources. She was delighted to learn about Sun City Center’s “water gems.”

Sun City Center Audubon Club President Mary Duncan admires Paul’s active stance with Florida’s wildlife. She said her own interest is a big reason she lives on North Lake ­— and why she is an ardent member of Audubon and now serves as its president. As Duncan and her neighbors have learned when hosting friends, many are amazed at the lake’s size. For those who want to know more about SCC’s lakes, here is some basic information about the five largest (in order of size):

• North Lake (between North Pebble Beach Blvd. and West Del Webb Blvd.) is the largest—54 acres and has four islands—Goat, Jungle, Heron and Little.  Around its perimeter are 118 homes.

• Simmons Lake (bordered by South Pebble Beach Blvd., Flamingo Lane and New Bedford Drive) covers 21 acres. It has no islands. Around its perimeter are 81 homes.

• South Lake (between Valley Forge and West Del Webb Blvd.) covers 13 acres and has 97 homes. It has no islands.

• Swan Lake (between Cherry Hills  Drive and Beach Boulevard) was the first community lake developed. It covers 13 acres and is surrounded by 48 homes. Its “no-official-name” island is home to the lake’s namesake swans and is affectionately referred to as Swan Island or Gilligan’s Island by some residents.

The National Audubon Society magazine has called Ann Paul “the wading birds’ best human friend.” She lives in Riverview and has been studying birds for 35 years. Paul  can be emailed at apaul@audubon.org.

SOUTH SHORE: Over 50 and want to dance?