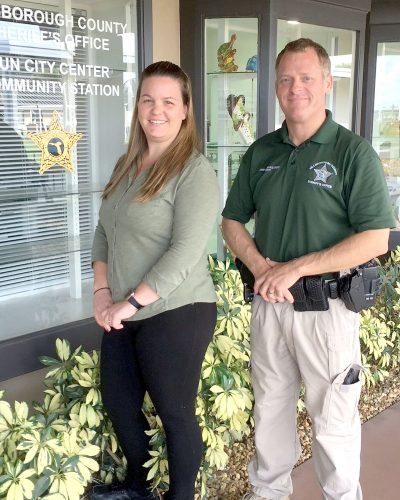 Sun City Center area residents will once again have direct access to law enforcement via the Hillsborough County Sheriff’s Office Community Station at 948 Cherry Hills Drive. The office closed more than three months ago when Debbie Vijil transferred to District V, and Community Resource Deputy Jeff Merry was left without someone to help him take calls, field complaints and help residents file all types of fraud reports.

“Michelle and I have worked together on previous cases while she was in the private sector,” Merry said. “Her skills and experience will be a wonderful asset to Sun City Center residents for years to come.”

Although Mortimer only started with the sheriff’s office June 11, she’s well versed at serving customers and handling the kinds of complaints she’ll be taking from residents.

The Ruskin resident took and investigated fraud reports for more than eight years, first with Fidelity Information Services in St. Petersburg and most recently Suncoast Credit Union in Tampa. She’s very familiar with the types of fraud and scams to which seniors often fall prey.

“I like being able to meet with people face-to-face, and I look forward to meeting Sun City Center residents and helping them with their law enforcement needs,” Mortimer said. “I’ll be Jeff’s right hand, assisting him with scheduling and the office’s more day-to-day responsibilities, so he can get out more into the community. I know this area very well.”

Mortimer was born and raised in Apollo Beach, and attended East Bay High School before moving to Connecticut with her father in 2004 and graduating from East Hampton High School two years later. She moved to St. Petersburg to live with her brother, Lee, and enrolled at St. Petersburg College where she earned an associate’s degree in 2008 and a bachelor’s of applied science degree in public safety in 2010.

“My dad used to be a major in Citrus County and my grandfather, a retired police officer from Port Nassau County, Long Island, so law enforcement runs in the family,” she said. “I knew when I started working on my bachelor’s degree that I wanted to eventually be in law enforcement. I took public safety courses in subjects like forgery, identity theft and computer-related crime.

Mortimer has been married to Cruz Hernandez for 15 years.

“We met when we were students at Eisenhower Middle School. We were high school sweethearts,” she said.

The couple has two children, ages 11 and 18 months.