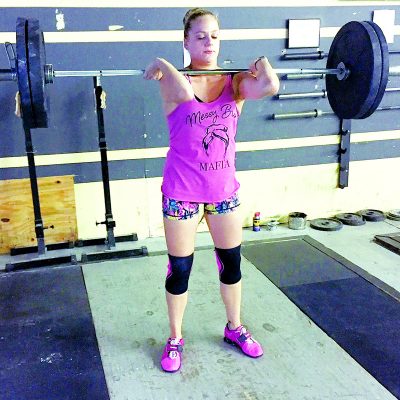 Kimberly Melaragni, 33, aspires to compete as a weightlifter in the Summer Olympic Games one day. The Riverview resident works out at Phase 5 Fitness in Brandon.
LOIS KINDLE PHOTO

Most folks are totally surprised when they learn about Kimberly Melaragni’s dream in life.

The 33-year-old Riverview resident currently works with outpatients as a physical therapy assistant at Sun Towers. It’s a job she’s skilled at and truly enjoys, but one day she hopes to compete in the Summer Olympic Games — as a weightlifter, of all things.

You’d never know by looking at her. At 5-feet-6-inches tall and 130 pounds, Melaragni is rather petite. Nevertheless, she can dead lift 220 pounds.

“Physical therapy is a passion, but weight lifting is my first love,” she said. “I really enjoy learning the techniques involved and improving on them. It’s amazing to see how you can keep  increasing the amount you’re lifting. It’s very challenging.”

Melaragni was born in Woburn, Mass., in 1985. She moved to Tampa with her family at age 7,  graduated from Leto High School in 2004, then  earned an associate’s degree in business at Hillsborough Community College. Before she graduated there, she was hired in 2006 by Suncoast Credit Union, where she worked as a loan officer for 10 years.

“I was happy there, but when the recession hit  and lending requirements tightened, I hated having to decline loans,” Melaragni said. “I wanted to do something more to help people, so I left. I thought about nursing, but I’m afraid of needles.”

Because she enjoyed exercising, she chose physical therapy, enrolled at South University in Tampa and immediately took the board exam to become licensed after graduating 15 months later. Her last clinical affiliation while in school was at the Sun Terrace Health Care Center,  where she worked with its inpatients and physical therapy staff. That ultimately led to her current position at Sun Towers.

“Kim is always smiling, focused and very patient-centered. She’s totally driven to get her patients to their goals,” said Joelle Schahfer, assistant director of rehabilitation for both inpatient and outpatient therapy. “She’s awesome.”

Melaragni takes her job quite seriously.

“I like to help people get back to their prior level of functioning, to get their strength back, walk correctly and decrease their pain,” Melaragni said. “It’s very rewarding.” 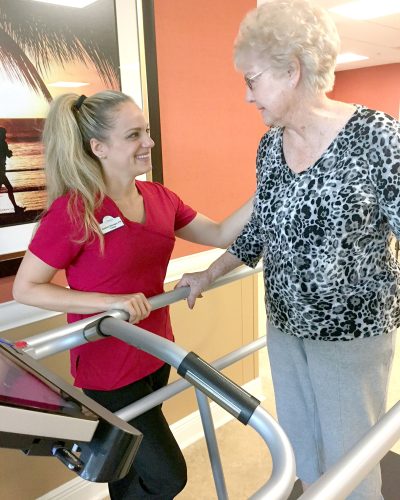 She’s been lifting weights the past five years, thanks to Dave Schmidt, a physical therapy assistant who invited her to work out with him at Phase 5 Fitness in Brandon. Its workout included weightlifting before cardio and she became hooked — on both the weights and him. The two are now engaged to be married, and he’s become her coach.

“I would love to compete in the Olympics, but first I have to compete in local and then in state competitions to work my way up to nationals,” Melaragni said. “I hope to be invited one day to join the USA Weightlifting Team.”

Some might think she started too late, that she’s too old to compete on that level. Undaunted by skeptics, she keeps her dream alive.

“In weightlifting, you’re placed in weight and age divisions, so my goal is still within reach,” she said. “No matter what anyone says, I’ll keep going.”

Ironically, Melaragni had never been an athlete before she began lifting.

These days she enjoys “anything outdoors,” including stand-up paddle boarding and hiking.

“It’s extremely difficult to compete in the Olympics,” Schmidt said. “To do that, Kim would pretty much have to quit her job and work out full time.”

“At some point, I hope to be able to do just that.”