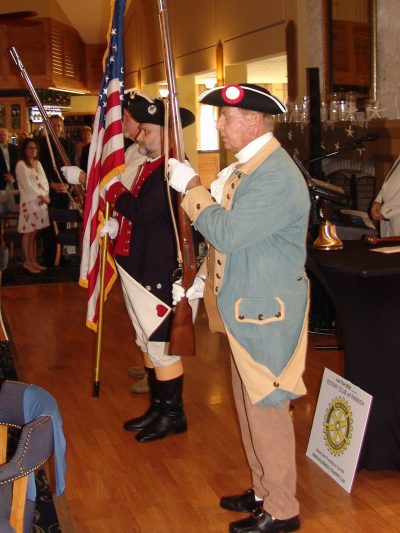 Members from the Saramana SAR Chapter – Sons of the American Revolutions, post the Colors at the opening of the Charter Night Ceremonies of the Rotary Club of Parrish.

Nearly 100 Rotarians and their guests attended the Charter Night Ceremonies of the Rotary Club of Parrish. The event was  held on June 1 at the River Wilderness Golf & Country Club, which will serve as the new club’s meeting place.

Festivities began with a reception featuring music by the Davis-Clark Jazz Duo and was followed by opening ceremonies and dinner in the main dining room. Past Rotary District Governor, Tim Milligan, presided over the event and represented the Rotary Club of Bradenton, which acted as the sponsoring club.

Following the Presentation of Colors by the “Honor Guard” members from the Saramana SAR Chapter – Sons of the American Revolution, and singing “Proud to be an American,” 27  business, professional and local residents were inducted into the “World’s Largest Service Organization.” District Governor, Bobi Bird, installed the incoming officers and directors who will serve for 2018-2019 and presented the Official Charter and a personal letter from Rotary International President, Ian Risely, to incoming President Chuck Badgley.

Badgley concluded the ceremonies by thanking all those who made the event such a success. He noted that the club was formed in record time, stressing the need for additional civic and service organizations in Parrish. The club has planned a golf tournament in September at the River Wilderness facility. The proceeds from the event will be pledged to support various projects directed toward the youth of the community. They also will become the ninth Rotary Club in the Manatee-Sarasota area to support the effort to build three “all-accessible” children’s playgrounds and want to commit to a forth playground in Parrish.

The club meets at 5:30 p.m. on the first, second and fourth Thursdays of each month at the River Wilderness Golf & County Club’s clubhouse at 2250 Wilderness Blvd. W., Parrish. Known as a “Happy Hour Club,” the Rotary Club of Parrish affords members the opportunity to meet at a time that has minimal effect upon their personal and business schedules. For more information, call Chuck Badgley at 813-335-5261.

SOUTH SHORE: Over 50 and want to dance?