Both head to UCF to join college’s rowing program 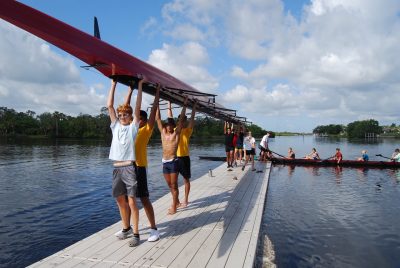 A crew at the Manatee County Youth Rowing summer camp carries their eight shell back to the boathouse recently after practicing on the Manatee River, while another crew maneuvers their shell to the dock.
CARL MARIO NUDI PHOTOS

Successful competitive rowing teams require everyone to pull together.

This was why Luci Derrick, 19, has been rowing since her freshman year at Palmetto High School.

“Being part of a team is important,” said Derrick, who will be a sophomore at the University of Central Florida in the fall. “I like to have something to work toward and to be a member of something.

“And the team environment allows me to do that,” she said.

She graduated from Palmetto High School in 2017 and started studying health services administration at UCF that fall.

As a freshman at the Orlando university, Derrick was on the Varsity Eight rowing crew, which consisted mostly of upperclassmen and also was captain of the freshman squad.

During her summer break she is coaching at the Manatee County Youth Rowing camp at Fort Hamer Park in Parrish.

Trish Chastain, the head coach of the rowing organization, had nothing but high praise for Derrick.

She said the Palmetto teenager was a natural and also a hard worker.

Derrick was born in Indianapolis and lived there until she was around 6 years old when her family moved to Palmetto.

She has been active in team sports since she was 4 years old, playing softball until she as around 14.

“I was tired of softball, so I decided to try something new,” Derrick said.

She heard about rowing from a friend who went to a rowing camp at Fort Hamer, a program of Manatee County Youth Rowing.

The friend said she was going to join the organization and Derrick thought she would give it a try. 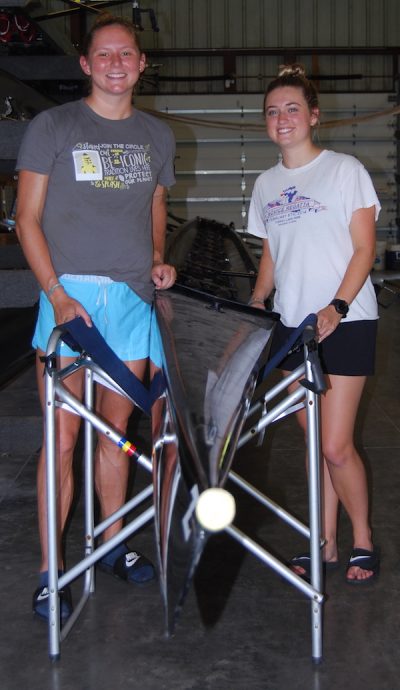 Luci Derrick, left, and Alexis Greer are coaching at the Manatee County Youth Rowing summer camps. The two athletes not only were on the local rowing club crew all four years at Palmetto High School, but when they graduated in 2017 they went to University of Central Florida and joined the rowing team there.

“At first I wasn’t serious about rowing,” she said. “I just wanted something to do during high school.”

When she signed up for the next camp, Derrick found a new sport where she could dedicate her energies and skills.

“My parents always had high expectations for me, and I used sports to achieve those expectations,” she said. “I found rowing really worked for me.”

Hard work led Derrick to become a front-runner in the rowing world.

“It takes the utmost efforts of a person to succeed in rowing,” she said. “But rowing came to me naturally.”

Even though Derrick was very athletic and had been involved in sports all of her life, her dedication was what helped her achieve recognition in the rowing world.

“I’m more involved with rowing than I was with softball,” she said. “We practiced softball once a week, while with rowing we practice five times a week.

“It was overwhelming at first, but it was good,” Derrick said.

Her hard work paid off during her high school sophomore year when she was Scholastic State Champion in two events, pairs and doubles, with her partner, Colleen Monaghan.

The Manatee County Youth Rowing program has been run out of the boathouse at Fort Hammer since December 2011.

The Manatee County Parks and Natural Resources Department had just completed building a boathouse facility at the Parrish county park.

“In 2005 I thought I was done with coaching when I moved to Manatee County because I wanted to live on the river,” Chastain said. “Then I got a call about consulting on building a boathouse.

“When that was completed I was then asked if I would help organize a youth rowing program,” she said.

During the early years of the club, Palmetto High School students were the core of the Manatee County Youth Rowing.

“They were the only high school to respond to a mass mailing looking for participants,” Chastain said.

Rowers now come from Braden River, Lakewood Ranch, and Southeast high schools, along with Palmetto, and most of the middle schools.

The clubs started with two boats.

“We’ve stayed true to ourselves because our primary focus is on the athlete,” Chastain said. “We have a small team of about 40 athletes.”

Alexis Greer was one of those athletes who came out of the Manatee County Youth Rowing program.

“My older brother, Hunter (Rayl), was on the first team of the rowing club, and I grew up going to his regattas,” said the 19-year-old. “I joined the team as a high school freshman.”

Greer graduated from Palmetto High School in 2017 and, like Derrick, will be starting her sophomore year this fall at UCF. 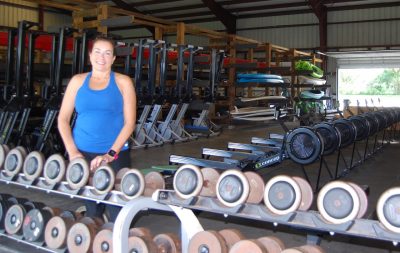 She is spending her summer coaching at the rowing camp, also.

Greer is a coxswain, the crewman who sits low usually in the bow of the boat and steers, in high school and at UCF. The coxswain also is the on-the-water coach for the rowing crew, yelling out orders and encouragement.

Greer, who was team captain during her senior high school year, said she feels a coxswain has to be spunky and direct.

“You can’t be afraid to speak up, and that’s my character,” she said. “I feel like rowing has deep roots in teamwork, and when you have people working toward the same goal as you it’s so motivating.”

The rowing sport got a boost last fall when the local area hosted the 2017 World Rowing Championships at the Nathan Benderson Park in Sarasota County.

Elite athletes from 70 countries competed in the championship event.

The Manatee County Rowing Training Facility at Fort Hamer Park was used as a practice site for some of the championship rowing crews.

Sean Walters, Manatee County sports commissioner, said the facilities on the Manatee River were a unique destination as a sports venue. 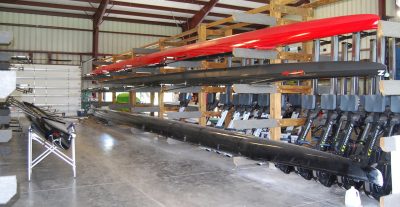 The Manatee County Youth Rowing club has grown from having two boats or shells when it was founded, and eight years later now has 16 shells in their boathouse at Fort Hamer Park in Parrish.

One of the first university teams to use and an impetus for the construction of the large boathouse and launching docks, was the Harvard University rowing team.

Since then teams from Eaton, Dartmouth, Ohio, and Georgetown universities have trained there, Walters said.

“Not only does it bring them to Manatee County every year, but it also is a marketing tool,” Walters said. “They go home and tell their friends and family about Manatee County.”

Manatee and Sarasota counties will play host to the USRowing Youth National Championships for the next three years starting in 2019.

Both Derrick and Greer may find themselves involved with those events, as both plan to continue to participate in the UCF rowing program.

“I’ll keep trying for the national team, and of course the Olympics,” said Derrick. “I’ll keep rowing for a long time.”