In January, Maj. Jim Bradford was chosen by Sheriff Chad Chronister to replace Maj. Rob Bullara, who retired after 32 years of service. Bradford’s appointment was short-lived in South Shore. 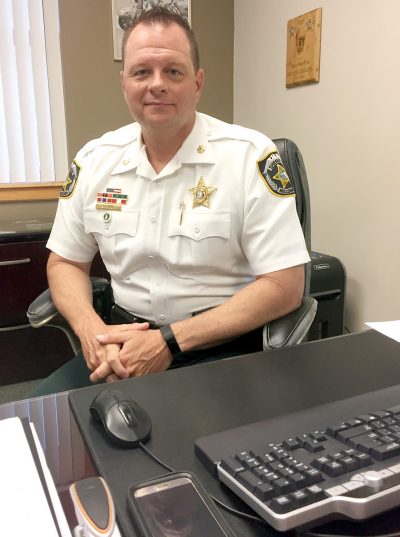 On May 8, Chronister promoted him to colonel of the Department of Investigative Services to fill the vacancy left by Col. Donna Lusczynski when she was named Chief Deputy. That left an opening in District IV, which Maj. Bob Ura sought to fill.

At the time, Ura was commander of the HCSO Criminal Investigations Division, which includes violent crimes like rape, child abuse and homicide. Having led that division for six years, he decided he’d like a change of pace.

“In criminal investigations, we’re reacting to crimes that have already been committed,” Ura said. “In patrol divisions, we have the opportunity to be proactive in crime prevention and community outreach, both of which are high priorities of Sheriff Chronister.”

Ura, 48, is District IV’s youngest commander. Since joining the Hillsborough County Sheriff’s Office as a patrol deputy in 1997, he’s had a quick rise through the ranks of law enforcement.

He was promoted to detective in 2000 and was assigned to narcotics, where he went undercover for a period of time. Then he was assigned to a federal drug enforcement task force on methamphetamines.

In 2002, Ura left the sheriff’s office and joined the Florida Department of Law Enforcement as a special agent. Five years later, he was assigned to the homicide unit of its Lakeland Field Office, covering Polk and Hardee counties. In 2007, he was promoted to supervise FDLE’s Public Integrity Unit, which investigated criminal allegations against public officials and police officers.

Four years later, Sheriff David Gee brought Ura back to Hillsborough County as a lieutenant in the Detention Department. While there he was promoted to captain in April 2012. Two months later, he was transferred as acting major for the Criminal Investigations Division. In 2013, the job became permanent.

“Through hard work and being fortunate to be in the right place at the right time, I’ve advanced steadily throughout my career,” Ura said. “I continue to be thankful to Sheriff Chronister for allowing me to continue as major.”

Ura’s first day as commander of District IV was May 21. His priorities in the role include being responsible for the wants and needs of the district’s residents and deputies, which includes dealing with the traffic concerns along the Big Bend Road and U.S. 301 area and working with the Florida Department of Transportation to “get out in front of the 50,000 new residents projected to be moving here,” he said; working with the sheriff’s office to fill its current shortage of 200 deputies agency-wide; meeting the challenge of keeping his command’s service level high in the face of South Shore’s explosive growth; continuing to focus on public safety through the use of technology, training and equipment; and relying on intelligence-led policing to identify known, repeat offenders and focus resources on them.

Ura said the HCSO has broadened its initial requirements to include documented work or military service experience to attract more applicants. He urges area residents with family members or friends who they feel could qualify to do so at www.joinhcso.com.

“We’re asking the public to be aware of people on construction sites after hours,” he said. “As Sheriff Chronister frequently says, ‘If you see something, say something.’”

On a personal note, Ura grew up in Fort Myers and graduated in a class of 27 from the Evangelical Christian School there. He served four years in the U.S. Air Force as an in-flight refueler stationed at Indiana’s Grissom Air Force Base, and then used the GI Bill to attend Ball State University in Muncie. He graduated in 1995 with a degree in criminal justice.

The major and his wife Stephanie, whom he met in college, have been married 22 years and live in FishHawk. They have two children: Addison, 19, a Florida State University sophomore, and Joshua, 15, a Newsome High School sophomore. The family enjoys boating and has an 18-month-old Labradoodle pup named Hazel.

Ura said he intends to lead District IV for many years to come and provide continuity for its deputies and area residents.

“We have many moving parts in the right places to deal with everything from speeding to violent crimes,” he added. “I’m excited to be here.” 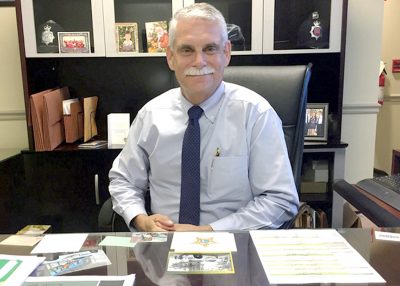 Jim Bradford served as District IV’s major from January through April before being promoted to colonel of the HCSO Department of Investigative Services by Sheriff Chad Chronister May 8.