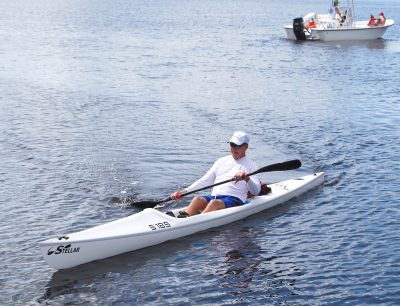 CARL MARIO NUDI PHOTOS
Greg Cole, of Bradenton, was the first paddler to cross the finish line in the 6-mile course of the Canoe/Kayak Marathon Competition in the Sarasota/Manatee Sports Festival held on June 2 at Fort Hamer Park in Parrish.

The Canoe/Kayak Marathon Competition started at 9:30 a.m. at Fort Hamer Park in Parrish with 14 paddlers competing in either the 6-mile or 12-mile course charted along the Manatee River.

At 9 a.m. more than 80 competitors demonstrated their power and strength in the Olympic Weightlifting Competition held at the Bradenton Area Convention Center in Palmetto.

In the canoe/kayak competition, Greg Cole, of Bradenton, came in first in the 60-plus men’s kayak 6-mile course, and first over-all in the 6-mile, with a time of 1:11.07.

The closest competitor was Tony Fabrizio, of Seminole, who came in first in the senior’s 50-plus men’s kayak 6-mile course with a time of 1:13.58.

“This was my first race in 15 years,” Cole said while dragging his kayak ashore after finishing the course. “I always liked it and wanted to get back into the sport.”

He said he took up cycling, but got tired of it and came back to kayaking.

The Florida Competitive Paddlers Association was the official sports organization monitoring the event for the Florida Sports Foundation, which oversees the Sunshine State Games.

“The Fort Hamer facilities are very nice,” said Kathy Edwards with the paddlers association and official timer for the event. “This is our third time here, and every year there have been improvements.” 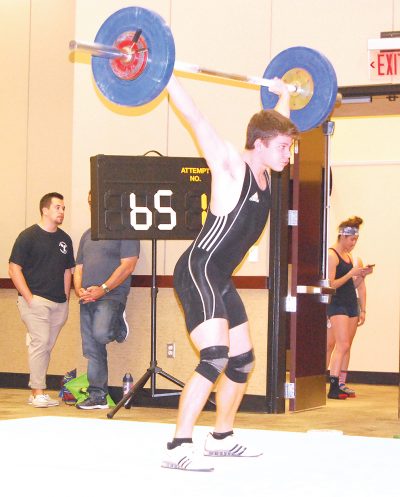 One of the more than 80 competitors demonstrates his power and strength lifting 65 kilos in the Olympic Weightlifting Competition held at the Bradenton Area Convention Center in Palmetto as part of the Sarasota/Manatee Sports Festival.

Edwards said the Fort Hamer event was one of several held around Florida for competitors to earn points for qualification in the state competition.

The Olympic Weightlifting Competition at the convention center was held under the auspices of the USA Weightlifting organization.

Canoe/Kayak Sprints Competition and Rowing Competition of the Sarasota/Manatee County Festival also were held on June 2 at the Nathan Benderson Park in Sarasota.

“Other states pattern their events after ours,” Hill said.

“The Games are an opportunity for amateurs to participate in sports,” he said. “People of all ages have the opportunity to be active in something they like to do.”

The Sunshine State Games take place mainly from May through July in sports festivals throughout Florida.

The Florida Sports Foundation also sponsors the annual Florida Senior Games, which will be held Dec. 1 through Dec. 10 in St. Petersburg.