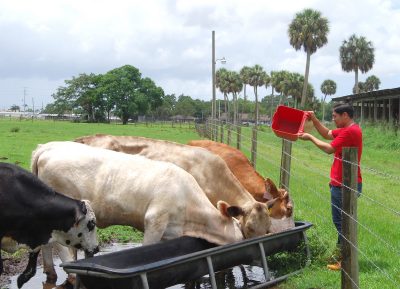 CARL MARIO NUDI PHOTOS
Seth Loggins, 15, feeds the livestock recently as part of his education in the Palmetto High School agriculture program. Seth, who will be a sophomore in the 2018-19 school year, said he enjoys working outdoors with the animals.

Even though housing developments have gobbled up thousands of acres, agriculture has remained extremely important economically in Manatee County.

According to Manatee County government figures the annual impact of agricultural products in the county is more than $500 million.

Since the 1920s the Manatee County School District has helped maintain this emphasis on agriculture with classes and programs for students.

Julie Tillet, who has taught the agriculture program at Palmetto High School for 10 years, said there is a need for such a class.

“Everyone has a fundamental need for food and shelter,” Tillet said. “Agriculture can be the basis of many other careers.”

Students in her agriculture classes learn academic lessons in writing, chemistry, biology and life skills such as responsibility and leadership, she said.

“As a teacher I need to teach them to be good stewards of the land,” said the fifth generation Manatee County native.

Tillet had about 150 students during the school year that just finished, and their classroom was in the school building and outside in the livestock shed and garden.

“We have 20 cattle and five goats to take care of,” she said. “We also have grown onion, okra and squash this year.

“We would have done more crops, but (Hurricane) Irma took out our greenhouse, and it won’t be back into operation until next school year,” Tillet said.

And for many of the students, working with the livestock and in the garden was fine with them.

“I like it because you’re outdoors a lot,” said Seth Loggins, 15, who will be a sophomore next school year. “I enjoy that you’re active and learning about a bunch of stuff because I’m not from a farming family.” 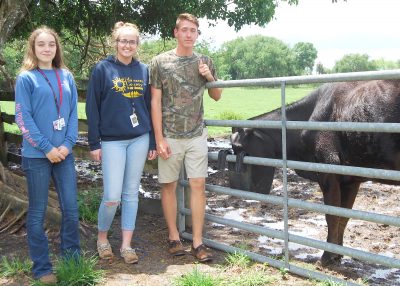 Gabby Gutshall, left, Megan Hosker, and Eli Hill, all 15 years old and who will be sophomores in the 2018-19 school year, are in the Palmetto High School agriculture program.

Being outside was also the favorite thing about the course for Megan Hosker, 15, who also will be a sophomore in the 2018-19 school year.

Although not from a farming family, Megan took the agriculture program while attending Buffalo Creek Middle School

“My brother took it and showed a calf (at the Manatee County Fair) and I worked with him, so I decided to take it too,” she said. “It’s nice to learn a lot that I would have not known if I didn’t take the course.”

Megan’s father, Steven Hosker, said he likes that his children are involved with the school agriculture program.

“It’s great. It’s very different from where we came from,” said Steven, who moved his family to Manatee County from New York City.

“It teaches them responsibility in the caring for animals,” he said. “And it teaches them where their food comes from and about sustainability.”

Although school ended for the summer last week, many of the students will continue to work with the livestock at the school as part of their community service for Future Farmers of America, or FFA.

Future Farmers of America, established in 1928, is a national organization of young people interested in the agricultural sciences.

According to its mission statement, the “FFA makes a positive difference in the lives of students by developing their potential for premier leadership, personal growth and career success through agricultural education.”

Tillet said through the FFA program the students learn valuable life lessons, such as parliamentary procedure, and organizational and writing skills.

“One project they have to do is write letters to sell the animals they raise,” she said. 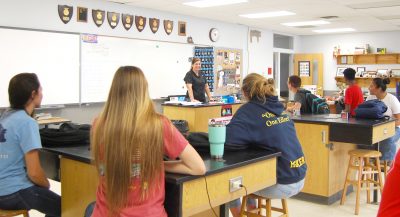 Julie Tillet, who has been a teacher for 20 years, teaches the agriculture program at Palmetto High School. Last semester about 150 students took the class.

Science also was a big part of the program, with the students learning about animal husbandry, chemicals and fertilizers needed to grow crops, and the physics and chemistry of photosynthesis.

The curricula were developed to prepare the students for future careers, whether in agriculture or another field.

The agriculture program also offers the students a chance to become certified in various fields through a National Farm Bureau program.

Some of the certificates, which give the students an advantage when applying for future jobs, are for forestry, agriculture and animal science, Tillet said.

Also, ServSafe, a food-safety certificate the National Restaurant Association offers, provides the students with a more immediate return, since it is often required for jobs in the restaurant and grocery industry where many of them work part time during their high school years.

“This year about 20 students took the certification tests,” Tillet said.

Although women were not permitted to join the FFA until 1969, today they make up 85- to 95 percent of the organization, Tillet said.

“They have become the leaders in the FFA,” she said. “We only have one male on our local board.”

Elaine Mason was running for FFA state president and Madison Waldo was headed to the University of Florida to become a large animal veterinarian.

A fundraiser the FFA has planned for Farm Week in Manatee County in November will provide another outlet for the students to demonstrate their leadership skills. 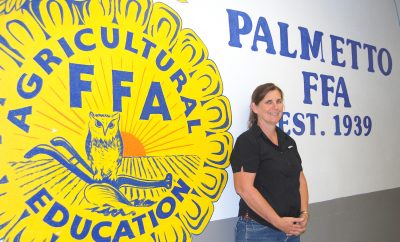 Julie Tillet is a fifth-generation Manatee County native and grew up on Terra Ceia Island working in the packinghouses and citrus groves.

“They will prepare and serve a dinner at the Palmetto Women’s Club to showcase Manatee County agriculture,” Tillet said. “Everything will come from local growers.

“The proceeds will help students with registration costs when showing animals at the fair,” she said.

Tillet grew up on Terra Ceia Island and raised hogs and other animals.

Her family also had a garden, and her mother would can vegetables, she said.

As a fifth-generation Manatee County native, Tillet has deep roots in the community.

She went to Palm View Elementary, Lincoln Middle School, and Palmetto High School, and then graduated from the University of South Florida with a degree in social work.

Her grandfather was an engineer on the locomotive that went to Terra Ceia packinghouses to pick up the vegetables and citrus.

She also worked in the citrus groves and packinghouses until her sons went to school, and then she began teaching.

She was a special education teacher for 10 years before switching to the agriculture program.

“I was ready for a change,” Tillet said.

She still lives on Terra Ceia Island with her husband Michael, where they raised their three sons, Michael, 27; Tony, 25; and Bill, 23.

For more information on the Future Farmers of America, go to its website at www.ffa.org.

To learn more about the Florida Farm Bureau, visit its website at www.floridafarmbureau.org.

The National Restaurant Association has more information about its certification program at www.servsafe.com.