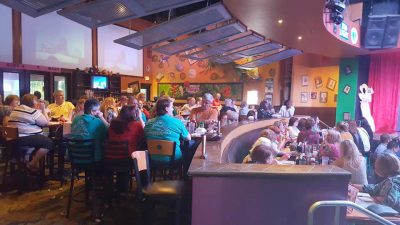 The Hamburger Mary’s in Brandon, which opened about a year ago, hosts charity bingo nights Monday through Thursday.

When times got lean during the Great Recession, almost no one was donating to charity. Instead, every penny was going to pay over-inflated mortgage payments or just to pay for groceries.

Hamburger Mary’s owner Kurt King got the message and started hosting Drag Queen Bingo one night a week at his popular haunt in Ybor City to benefit local charities. It wasn’t long before he was hosting it four nights a week.

Now, folks near South Shore can visit his Hamburger Mary’s in Brandon, instead of traveling all the way to Ybor City. And after less than a year, he offers Drag Queen Bingo at the Brandon location four nights a week, too.

Local youth soccer, baseball and football teams benefit, as do numerous cancer charities and animal groups. RVR Horse Rescue in Riverview is among the groups that has held fundraisers in Ybor and will soon hold one at the new Hamburger Mary’s, located at 2016 Town Center Blvd.

“We’ve held three events at Hamburger Mary’s and are planning our fourth and it will be in Brandon,” said Kelly Ford with RVR Horse Rescue. “They have all done very well. We’ve made a couple thousand dollars each time.”

Ford said the events include baskets to win and raffles.

Patrons pay $10 to play bingo, which is called by one of several drag queens who put on the show at the bar and grill. While playing, guests can enjoy drinks and everything from hamburgers to fresh seafood, steaks, wraps and a ton of appetizer choices.

“We are open-minded people and we get everyone in there from every walk of life,” King said. “The main thing I love is doing a lot of charity.” In addition to the bingo, there are also 50-50 drawings. All bingo money goes to the charity of the night.

“In California, they do hambingo, which started when so many organizations needed money.” King followed suit when he opened in the Tampa Bay area.

Hamburger Mary’s was an idea originally dreamed up by a couple of guys in San Francisco in 1975, King said. “There was no place to eat around where they were, so they opened Hamburger Mary’s. Other people saw it and asked if they could use the idea.” It wasn’t too long before the men began selling franchises.

King has four Hamburger Mary’s now, the first in Ybor City, which opened in 2008, the second in Clearwater, which opened five years ago, the third in St. Petersburg, that opened two years ago and then the fourth in Brandon, which King opened about a year ago.

In addition to bingo during the week, each location hosts drag queen shows on the weekends. There is a Sunday buffet brunch for $14.95. To include endless mimosas, add $10.