Two longtime friends needed something to keep them busy after retiring, so they started a business together.

Randy Roberts and David Livingston, both of whom also live in River Wilderness, kicked off their business, Golf Cart Doctors, about a month ago.

“We’ve been friends for many years,” said Livingston.

So when Roberts called about starting a business, Livingston said lightheartly it gave him a reason to take off his apron since he does the housework while his wife, Sandy, works. 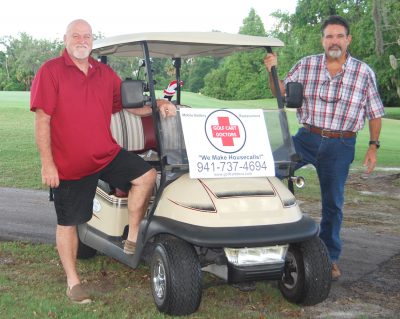 Roberts, who has lived in Manatee County for 23 years, came up with the idea of providing a service of changing golf cart batteries at the owner’s home.

He had moved to River Wilderness about two months ago and purchased a golf cart, which needed a new battery.

“I called around looking for prices and found this place in Punta Gorda,” he said.

One of the reasons Roberts picked the south Sarasota County business was because the serviceman would change the battery at the home.

Typically if someone needs a battery changed on a golf cart, the service company will come and put the cart on a trailer and take it to the shop, Roberts said.

“They may keep it for days,” he said.

Roberts and the serviceman had a “friendly conversation.”

“I talked to the guy about his business, and he said there was a need for such a service in this area,” he said.

“It struck me that there’s a guy from Punta Gorda telling Randy he needs to start a business in Manatee County and I thought why not,” said Livingston, a third-generation native of Manatee County. “After talking to people and seeing the need, we decided to do it.”

Roberts and Livingston began to do their research and found there were “a lot of golf carts from Parrish to Palmetto.”

“For some residents of Colony Cove, a golf cart is their only way to get to shopping or doctor appointments,” Livingston said. “Some don’t even have driver’s licenses.”

Colony Cove is a large mobile home community on U.S. 301 in Ellenton.

“We’re interested in providing a service for people who depend on their golf cart for their transportation,” Roberts said. “We’ll come to the house and change the battery there so you can have it running right away.”

“And we’re not only going to charge your battery, we’ll check your tires and grease the front end,” he said. “We offer preventive maintenance and education.”

“Just like when you get the oil changed on your car, they’ll check all the fluids and the tires,” Livingston added, highlighting the special services they will offer. “We’ll also be available on weekends and after 5 p.m.

“With the research we’ve done, I believe we will be successful,” he said. “We just have to spread the word.”

Roberts also said having been a business owner at one time is a big plus.

“I owned Roberts’ Party Central,” he said. “I provided bounce houses, a train, and activities for kids’ parties.

“I worked mostly Saturdays and Sundays, and it grew so big I didn’t have time for the family,” Roberts said. “I was working eight to 10 hours each day.

“Sometimes my wife, Cheryl, and my son would have to come to work with me just so we can spend time together.”

He ran Roberts’ Party Central as a successful business for five years before selling it.

“With the Golf Cart Doctors I thought this is something we can manage time-wise and provide a good service to Manatee County residents,” he said.

“And we are extremely competitive in price,” Livingston said, “but our strength is the convenience of going to your home.”

Roberts said they would not have to speak negatively about their competitors.

“We feel we can just tell golf cart owners what we have to offer,” he said, “and the people will say this is a better way.”

Both Roberts and Livingston said their Christian faith was what was guiding them to start a business and how to run it.

“I accepted Jesus as my Savior in 2014,” said Roberts, who attends Woodland Community Church, 9607 S.R. 70 E. “And I feel the same as David about God being Number One.

“That’s important because it’s all about caring about people,” he said. “God said we have to help people.”

“We’re providing people with a service no one else does,” said Livingston, who attends Bayside Community Church, West Bradenton Campus on State Road 64 East. “We’re working for Him.”