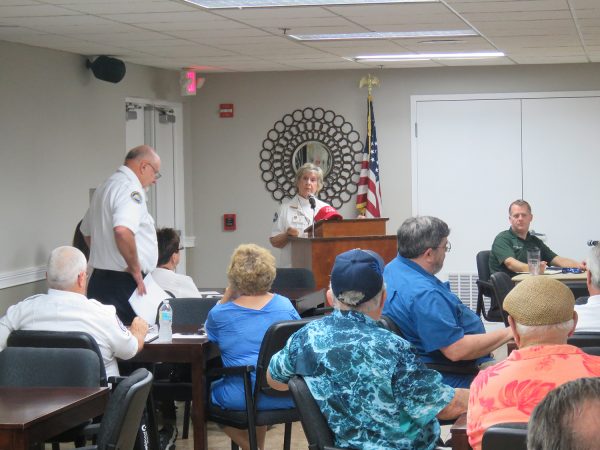 Eileen Peco, part of the CERT 2018 Annual Disaster Council Meeting organizing team, said that clarifying to residents the services provided by local support groups is essential. “Our goal is to build awareness so people don’t have to be scared,” she said.
BILL HODGES PHOTO

For the past 15 years, South County Communities Emergency Response Team (CERT) has been sponsoring an annual Disaster Council Meeting. Held on the Sun City Center Community Association’s Central Campus, this annual gathering is an opportunity for the various support groups to discuss their state of readiness for emergency situations.

It had a somewhat different tone this year due to Irma skirting our area last September. In addition to sharing readiness information, they related experiences dealing with the storm and changes they might have made since then. Deputy Jeff Merry, for example, said that last year they implemented a community disaster action plan that hadn’t been needed for many years. ‘We did well but we can do better,” he said and proceeded to describe some procedural changes to speed up clearing of roadways and assessing community power outages.

Over and over, the groups reported being overwhelmed with phone calls last year as Irma threatened, some for real emergencies and some from nervous residents who simply did not know what to do. Many inquired about shelters, so it was apparent that some residents are not aware that Sun City Center is not an evacuation area because of its high elevation and distance from Tampa Bay. Consequently, there are no shelters here. Merry explained that county shelters will not accept individuals from this area. The only exception is the USF Sun Dome, which will accept individuals with medical or ambulatory issues. Everyone agreed that media information and local advice about getting prepared in the months prior to the storm largely goes unheeded.

Eileen Peco, a CERT and SCC Emergency Squad member who helped organize this meeting, said the high number of calls emphasized the need for residents to know what they can—and cannot—expect from local support groups. She reiterated that every non-emergency inquiry about what to do ties up a line and said, “Our goal is to build awareness so people don’t have to be scared.”

CERT is a national organization that uses area resident volunteers to complement professional fire and police organizations in emergency situations — such as natural disasters — when uniformed fire, rescue and medical services are overwhelmed. Locally, the group also promotes non-emergency projects and programs to improve the safety of the community. In essence, according to Hud Richards, immediate past president, CERT’s job is to “fill in the blanks.”

Participation in CERT, a 501(c)3 corporation with about 100 members from around Tampa Bay, is strictly voluntary. President Ira Arman encourages anyone interested to attend a membership meeting on the third Thursday of each month (except November and December) at 6:30 p.m. at the SCC Area Chamber of Commerce, 1651 Sun City Center Plaza.