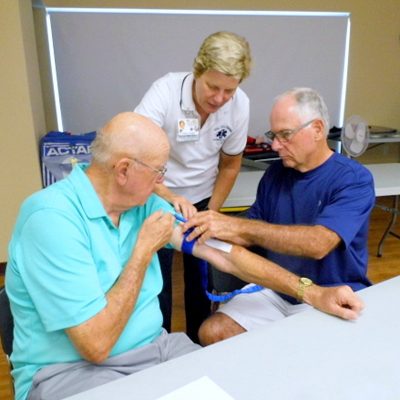 Knowing what to do when others have injuries resulting in uncontrolled bleeding can save their lives. Just a few simple steps can mean the difference between a victim’s reaching medical help or dying at the scene.

“We decided to follow a federal, interagency  initiative called Stop the Bleed, which was developed after the Sandy Hook Elementary School shooting in 2012,” said Marilyn Navarro, assistant chief/public relations of the Sun City Center Emergency Squad. “We’ve been told that a number of people involved in the mass shootings in Orlando and Las Vegas were saved because there were people nearby who knew how to control bleeding.”

Thanks to a $4,200 grant from the Interfaith Social Action Council of Sun City Center, the squad was able to purchase kits and training equipment to demonstrate the life-saving procedures to all its members.

“We’re now offering the public free, hands-on training to teach Stop the Bleed to residents,” Navarro said. “Anyone living in the South Shore area is welcome.”

The Saturday classes are taught by volunteer members at the squad’s Training Center, 124 S. Pebble Beach Blvd., Sun City Center. Class size is a maximum of 12.

Once participants complete the roughly two-hour training, they are given a link where they can purchase their own basic kits at the squad’s cost of $23, if desired. The kits aren’t required to save a life, however. The class covers how belts, plastic bags and other common items can be used to make do in a pinch.

“In addition to individual residents, this training is beneficial for members of area businesses, churches, social clubs and fitness centers ­— pretty much any organization, ” Navarro said.

The class isn’t only about saving lives during mass shootings, Navarro said. The procedures taught could be used by anyone to help a victim of a stab or gunshot wound, slip-and-fall wound, puncture wound, compound fracture and more that result from an accident or incident of intentional harm at home, in a public building or workplace.

“People with uncontrolled bleeding can die from blood loss within five minutes, so knowing what needs to be done helps keep them from panicking and bleeding out,” she said. “With presence of mind, Stop the Bleed procedures could even be performed on yourself.”