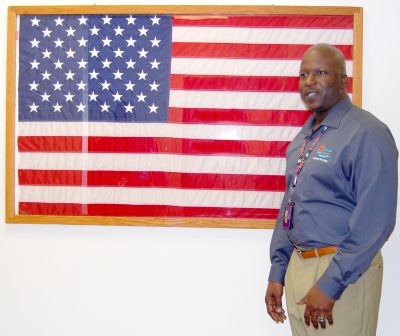 There are around 40,000 U.S. Armed Services veterans in Manatee County according to Lee Washington, and it is his job to make sure they receive all the benefits they deserve.

Washington has been in charge of the Manatee County Veterans Services Division since May 2012.

“Our role is more of a social worker, and we link all the services together for the veteran,” he said. “And to be successful you have to be patient and a good listener.”

The county has trained counselors to help veterans and their spouses and children qualify for federal, state and local benefits.

Some of the issues the veterans services office helps with are education, home ownership, and disability and pension compensation benefits — all at no charge to the veteran or family member.

Washington, who started with the county veterans services office in August 2009 as a counselor, said all counseling sessions are confidential, but an appointment is necessary.

“All the interviews are private,” he said. “No one is in the office with the veteran except the service counselor.”

Washington wanted to make sure the process was as easy as possible for the veterans, so along with the office in downtown Bradenton in the Manatee County Administration Building, he facilitated the opening of a satellite office in Ellenton, at 5030 U.S. 301 N.

Every county and some of the larger cities in Florida have a veterans services office.

The head of each office and the counselors are required to be military veterans themselves and have served during wartime.

Having served in the U.S. Marine Corp during the military operation Desert Shields allowed Washington to relate to the veterans his office serves.

“We advise them what would be best for them and that is easy for us because we understand their point of reference,” he said.

Washington went into the Marines right after graduating in 1987 from Charlotte High School in Punta Gorda.

He knew he wanted to be a Marine when he was in the seventh grade.

“A young Marine came home in his dress uniform and I said that’s what I wanted to be and worked toward that goal from then on,” Washington said. “I made sure I had good grades, was athletic, and did the right things.”

The respect that Marines received impressed a young Washington, who recently celebrated his 49th birthday.

“Not only did he look sharp in his dress uniform,” Washington said, “but he carried himself in a certain way.

After basic he was sent to Camp Pendleton in San Diego for infantry school for eight weeks.

“Then I was selected to go into the Marine Corp Security Force and went to Virginia for certification in the security forces,” Washington said.

For the remainder of his 11 years in the service he worked in the Corps security forces.

After being stationed in Kingsbury, Ga., for two years, Washington was transferred back to Camp Pendleton with the 5th Marine Division in May 1990

In August 1990 Operation Desert Shield kicked off, and he ended up in the Philippines as part of a group of Marines to relieve a unit that was being shipped to Iraq.

He went to Okinawa for a year and two months before being transferred back to the states where the infantry platoon sergeant was honorably discharged.

“I was 29 years old, running full speed and the body just couldn’t do the things the way I wanted it to do, so I decided to end my active service,” Washington said.

He stayed in California for a while working various jobs.

Washington then returned to Port Charlotte where he grew up.

He was working as a manager of a Dollar Tree store in 1998 when one of his customers recognized the former Marine’s special qualities.

“He said to me, ‘you’re not cut out for this’”, Washington said. “He thought I should be doing better.”

The customer gave him the number for his boss who was in the mortgage business and Washington called him.

Washington moved to Bradenton in 2001 and worked as a mortgage banker in Sarasota.

“During the housing boom I was really successful,” he said. “I managed three offices.”

In 2007 he started seeing what was happening to the housing market, and there was a lot of stress in his job.

“I knew I had to reinvent myself to transition into another career,” Washington said.

He started working part time as a mail carrier at the Palmetto post office and then in August 2008 at the Sarasota National Cemetery for a year.

In August 2009 Washington started as a veterans services counselor in Manatee County.

He said his background in banking and the National Cemetery helped him provide better answers to the veterans who came for counseling.

Washington has been married to his wife, Robyn, for six months, but they have been together for four and one-half years.

Madina was in the Coast Guard for four years.

After she was discharged she was called back for four more months of active duty after the Sept. 11, 2001, terrorist attacks.

Then she served two years in the reserves.

A lot of veterans want to make sure those helping them understand what they are going through, said Medina, who has been a service counselor for two years.

“We talk about our service stories and it helps them open up,” she said. “Sometimes telling war stories puts them at ease.”

The more information Medina has about the veteran, the better she can get the right programs, she said.

Medina said the veterans who use the Ellenton office have been very positive about the location.

“They say access for those in wheelchairs and walkers is so easy,” she said. “And there is a lot of room in the building to maneuver as well as easy parking and access to the building.

Interviews are held at the Manatee County Administration Building, 1112 Manatee Ave. W., in Bradenton, on the third floor during the hours of 8 a.m. to 5 p.m., Monday through Friday

A veterans services counselor is on duty at the Ellenton office in Manatee County Building and Development Services Annex, 5030 U.S. 301 N., from 8 a.m. to 4 p.m., on Tuesdays.