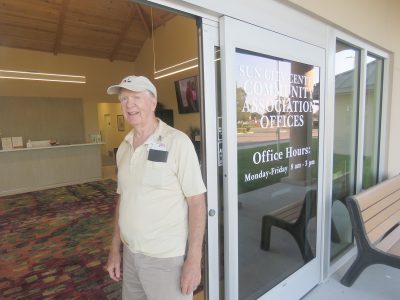 Just about a year ago, the Sun City Center Community Association office employees and directors moved into modular units on N. Pebble Beach Boulevard that served as temporary offices. Since then, members have watched construction of the new office building down the street.

They started moving into the new building April 27 and opened for business on May 2. An open house is planned for 9 to 11 a.m. Friday, May 18, when members are invited to tour the facility and mingle with fellow members over refreshments.

“We planned the move for dates when fewer of our members would be impacted,” said Community Manager Lyn Reitz. She said they will be making some further tweaks to improve the aesthetics both outside (landscaping) and inside. It is handicap accessible and hurricane rated to 165 mph. The 7,009-square-foot facility compares with a scant 2,000-square-foot office space they previously occupied on the same site.

Reaction of members who visited the office during the first week have been positive. They are happy to see more space in the reception area and in the conference room where new member orientation sessions and board workshops take place. The new offices for employees who interact routinely with members also offer more privacy, which they appreciate as it is more appropriate for conducting business. They also like the cohesiveness of the exterior design; it is consistent with that of buildings added during a capital program four years ago that added three new buildings, expanded the library and redesigned the parking lot.

The structure that had been used as an office was never meant to be used commercially. It was initially a model home and was moved to the N. Pebble Beach Boulevard site nearly 40 years ago, along with a second house that housed the SCC Security Patrol.

According to CA President John Luper, the new building was completed on schedule and under budget. “We are very pleased to see the hard work and planning come to fruition. Just a year after our members voted to go ahead with construction, we have a beautiful energy-efficient building that will serve our community for many years to come,” he said.