The 2018 Sun ’n Fun Fly-In Expo did not disappoint 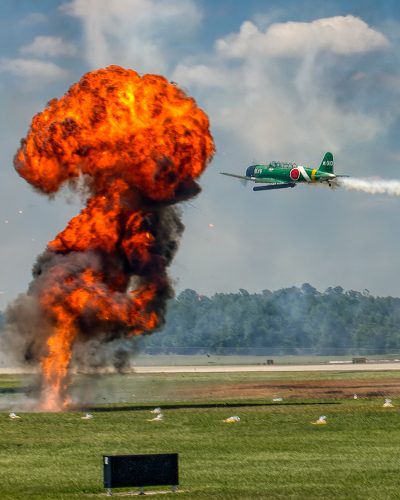 troy mcclellan / fulldomefx.com
Tora! Tora! Tora! performance by the Commemorative Air Force was a recreation of the Japanese attack on Pearl Harbor at the recent Sun ’n Fun Fly-In Expo near Lakeland.

The annual Sun ’n Fun Fly-In Expo is a huge draw from all over the United States and internationally. Many do not realize that the fly-in is just a part of the much larger mission of the Sun ’n Fun Expo campus. The campus is home to the Aerospace Center for Excellence, or ACE, with 14 buildings and a Boeing 727 classroom, and is located at the Lakeland-Linder Regional Airport in Lakeland.

The Sun ’n Fun Fly-In is their biggest event of the year and helps fund the education and outreach programs offered. These include STEMtastic™ day camps that offer daily themes utilizing Science, Technology, Engineering and Mathematics (STEM) learning applications. Classes are taught by educators from STEM schools.

Another major program is the Destination Aviation Summer Camp offering flight opportunities for all participants and showcases the aircraft, cockpit instruments and aerodynamic principles. They also have time in flight simulators.

In addition to the on-campus programs and student tours that happen throughout the year, Sun ’n Fun staff take resources and exhibits into area schools, assisting teachers with STEM education. They also host aerospace educator workshops helping teachers and education professionals with their quest to inspire the next generation of aerospace engineers, pilots, technicians and those who will serve in the aviation industry.

The 2018 airshow was to feature the U.S.A.F. Thunderbirds Demonstration Squadron, but just a few days before the event, the pilot of Thunderbird 4, Major Stephen Del Bagno was killed when his F-16 Fighting Falcon crashed over the Nevada Test and Training Range. The tragic accident happened during a routine demonstration training flight.  As a result, the Thunderbirds cancelled their upcoming performances to focus on the team. Brig. General Jeannie Leavitt, 57th Wing Commander said, “He was an integral part of our team, and our hearts are heavy with his loss. We ask everyone to provide his family and friends the space to heal during this difficult time.”

John “Lites” Leenouts, president and CEO of Sun ’n Fun stated: “We will dedicate our 2018 show to supporting the Thunderbird family and honoring their fallen teammate.”

The Tora! Tora! Tora! performance by the Commemorative Air Force was a recreation of the Japanese attack on Pearl Harbor with simulated bombings and live pyrotechnics.

There were also a couple of nighttime air shows that featured stunt planes with special lighting and pyrotechnics that light up the sky. Saturday night’s show culminated in a fireworks display.

According to organizers, attendance this year was among one of the best. This even takes into account the rain-out days of the opening day on Tuesday and the closing day on Sunday.  The numbers are still being tabulated, but there is confidence that this will be one of the best years ever. There were record numbers of aircraft that flew in for the event, and record numbers of campers, putting them in an overflow situation. Daily student tours were near all-time highs.

Sun ’n Fun continues to inspire students and the general public alike with the fascination of flight. They hope to inspire a new generation of Orville and Wilbur Wrights, Amelia Earharts, Charles Lindberghs and Neil Armstrongs — the list could go on with so many important people that have advanced the science and fantasy of flight.

There is a wonderful museum on the property that is open to the public. More information can be found online at: www.flysnf.org.