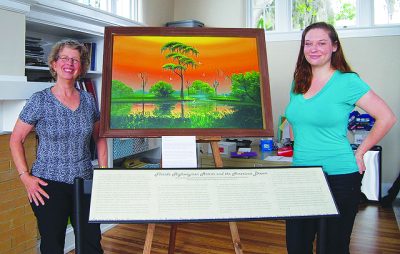 CARL MARIO NUDI PHOTOS
Diane Ingram, supervisor of the Manatee County Agricultural Museum, left, and Tori Chasey, curator at the Palmetto Historical Park, stand next to a Highwaymen painting on display at the Carnegie Historical Library, 515 10th Ave. W., Palmetto. The artwork was painted by artist Alfred Hair, one of the founders of the Florida Highwaymen, and will be part of the exhibit of Highwaymen artwork at a fundraiser from 10 a.m. to 3 p.m. on May 5 at the historical park.

Many areas of the United States are known for their own art movement, such as the Hudson River School or the Rocky Mountain School.

These groups of artists were defined by their techniques and subject matter.

One of the most recognized schools in Florida are the Highwaymen, and the Palmetto Historical Park and Manatee County Agricultural Museum will hold a special showing and sale of their artwork from 10 a.m. to 3 p.m. on May 5 where visitors can meet and watch some of the famous artists.

“It’s really nice to be able to talk to them and hear their stories about how being a Highwayman changed their lives,” said Tori Chasey, curator at the historical park. “How it gave them new opportunities and how those opportunities changed over the years.

“It was their stories that drew me to their artwork,” Chasey said.

The Highwaymen had humble beginnings.

Hair shared his painting skills with other young African Americans. The group of young artists would meet in backyards and sometimes in the natural environment for inspiration.

They quickly built up an inventory of artwork and would sell their framed, colorful landscaped paintings door-to-door at homes and offices along the East Coast of Florida for as little as $20 to $25 a piece.

Sometimes they also would sell the paintings from the trunk of their cars alongside the highway to tourists.

From this action, art museum curator Jim Fitch coined the name “Highwaymen” in describing the artists in an article he wrote in the 1990s.

The outsider art soon became mainstream, and the popular works began selling for prices in the thousands of dollars. 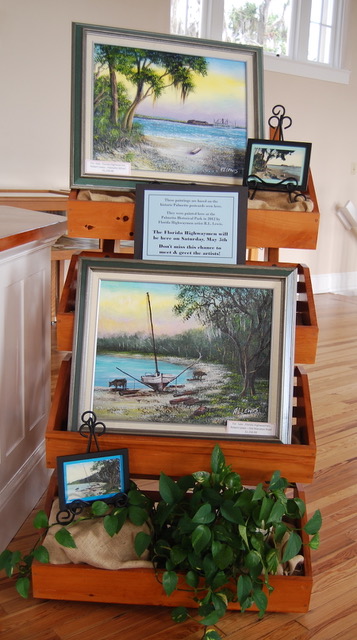 Florida Highwayman artist R. L. Lewis painted these two pieces on display at the Carnegie Historical Library at the Palmetto Historical Park, 515 10th Ave. W., Palmetto, in 2012 at an exhibit and show at the historical park. The paintings are based on the two historical postcards next to the paintings.

The original Highwaymen and the next generation of artists who began painting as an alternative to the back-breaking labor in citrus groves and tomato fields, gained a notoriety and fame that has helped them maintain a higher standard of living usually denied African Americans in those times of segregation and discrimination.

It was the stories of the 26 original Highwaymen painters that inspired Agricultural Museum Supervisor Diane Ingram to bring the artists and their paintings to the village and museum for the first time six years ago.

“I had learned about them shortly after starting work at the Agricultural Museum in 2001,” Ingram said. “I thought they were part of Florida history and it would be great to have an exhibit here.”

There was a traveling exhibit of the Highwayman artwork and she inquired about bringing it to Palmetto, but it was too costly at that time.

“It was always in the back of my mind,” Ingram said.

Her personal interest in the artists led her to attend a show in Clearwater.

“While there I asked if they would be willing to exhibit at the Palmetto Carnegie Historical Library, and they accepted,” Ingram said.

“The first year, 2012, we had nine artists, seven of the original Highwaymen, one next-generation artist, and the widow of (the Highwaymen founder) Alfred Hair, Doretha Hair Truesdell,” she said. “She’s been accepted into the ranks of the original 26.”

Seven of the 13 surviving original artists will be at the May 5 event, including Curtis Arnett, Al Black, Mary Ann Carroll, Robert L. Lewis, Roy McLendon, Charles Walker and Hair Truesdell.

“They are all in their 70s and 80s and are traveling less and less because they can’t travel as easily.

This will be the fourth time the village and museum has hosted the Highwaymen.

The exhibition has been up since Palmetto Heritage Day in March and will remain up until May 11.

After the May 5 show, visitors can still view the exhibit during tours held Tuesday through Friday at 2 p.m., with an extra tour at 10 a.m. on Friday.

None of the approximate 30 pieces of artwork in the exhibit is for sale, for they are part of the permanent collection of museum and village or from the private collection of Bob and Linda Robinson.

But the artists will have their own work and prints available for purchase, and a portion of the sales will go to the library, museum and historical park.

“You’ll also get to meet and chat with the artists,” Ingram said.

“At 11 a.m. Highwayman Al Black will do a painting, hopefully outside, if the weather is good,” she said. “It will then be auctioned off.

“And at 1 p.m., another original Highwayman, Robert Lewis, will do a painting demonstration in the library,” Ingram said.

Black, in a recent telephone conversation, said he was looking forward to being in Palmetto.

“Last time I sold a lot of paintings,” he said.

Black said he started painting while he was a salesman for the Highwaymen.

“When one of the painters would mess up a painting, I would have to fix them on the road,” he said.

With the demand and popularity of his work, the 72-year-old artist does not have to work as hard these days.

Bob Robinson, whose collection makes up the majority of the show, was looking forward to the May 5 event because he will have a chance to talk to the artists and purchase more of their work.

“I’m trying to get at least one piece painted by each of the original artists,” said Robinson, who lives on Anna Maria Island with his wife Linda.

The Robinsons obtained their first two pieces of Highwaymen artwork in the 1970s, but did not realize what they had purchased.

“Years ago I owned a business in Okeechobee and a guy came to the door and I bought two paintings at $20 each,” Robinson said.

“Both have whitetail deer (in the scenery), and I’m a deer hunter and it reminded me of years as a hunter,” he said. “I hung them in my business office for years.

“When we closed that office I put them in the barn attic,” the businessman said. “Years later at an exhibit (and after they had started collecting Highwaymen artwork) my wife said ‘those two paintings in the barn are Highwaymen.’”

The couple first started collecting in earnest about 12 years ago when they were still living on the East Coast of Florida.

“A friend in Miami had a few and I liked the look,” Robinson said. “The natural Florida themes reminded me of going through places such as the Big Cypress Swamp and the Everglades.”

They went to the Highwaymen exhibit at the Palmetto Historical Park a few years back and met some of the artists “and I just liked them and bought some,” he said.

“I appreciate the art, and it feels good to share with others and to see how they appreciated the art as we do,” Robinson said.

Some of the same qualities of the artwork that attracted Bob and Linda Robinson also drew Ingram to the Highwaymen.

“I appreciate the accuracy of their beautiful landscapes and the added items depicting life in Florida,” she said.

“I remember when I first moved to Florida from New Jersey in 1986, I was constantly struck with what a beautiful place I moved to,” Ingram said, “and it still happens today.

“And the Highwaymen’s paintings reflect that feeling,” she said.

She also was impressed with the history of the Highwaymen.

“This is how they made their living, instead of working in the fields picking tomatoes and oranges,” Ingram said.

The show is important for the Palmetto Historical Park and Manatee County Agricultural Museum because a percentage of the sales will help those institutions.

“But the primary reason for the event is to expose the community to the history of the Highwaymen,” Ingram said. “They are part of Florida’s history.”

To learn more about the Highwaymen, go to their website at ww,w.floridahighwaymen.com.

For more information about the Palmetto Historical Park check out the website at www.palmettohistoricalpark.com, and for the Manatee County Agricultural Museum, www.manateeclerk.com/historical/AgMuseum.aspx.