The art of making cane syrup 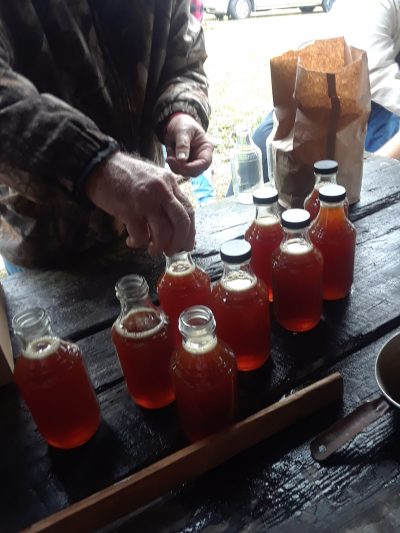 Bottles of cane syrup are ready to be capped. The sweet, caramel-colored confection is a delicacy now and was a necessity in generations past as a source for sweetening foods and beverages.
JONIE MASCHEK PHOTOS

Have you ever been to a sugar cane boil? This is a long-standing Florida tradition that has been bringing communities and families together for over 100 years.

Several weeks ago I was up at 5 a.m. driving east on S.R. 674 to Fort Lonesome. There I met Billy Ash of Riverview who would take me to a local sugar cane mill.

It was looking like I was driving into no-man’s land. I was so grateful to have someone who knew where we were going leading the way.  The event started at 6 a.m. at the Reynolds compound. The sun wasn’t up yet, and it was dark, with vast fields on each side of the road. We finally found a dirt lane on the left side of the road which we decided was Reynolds Road. To my amazement there were a couple dozen trucks already parked there.

We parked our vehicles and proceeded to a shed with a dirt floor. This was the original building that syrup has been made in for the last l00 years on this 50-acre compound of family homes and farmland. We were met at the entrance by Robert Earl Reynolds with a cup of coffee — which  I was so grateful for.

Many years ago Robert Earl Reynolds’ grandmother, Elizabeth Sweat, made the syrup. When she died, Robert Earl’s father took over, and when he passed away Robert Earl continued the tradition along with his son, Kevin — now the fourth generation in this endeavor.

By now it was daybreak, and Bob Hester was putting logs in the fireplace. On the other side was a round, 40-gallon pot encased in stones, connected to the fireplace.

Trucks started arriving with sugar cane stalks. A crew unloaded the sugar cane and started sending it through the grinder. In the old days the grinder was operated by a mule, horse or oxen that was tethered to a long pole. The animal walked in a circle, which turned the gears and squeezed the juice from the cane. At the Reynolds’ compound this task is done with a tractor.

The cane juice was poured in the large pot and when the temperature hit 212 degrees, the pot quit boiling. The syrup was skimmed constantly by Robert Earl, Ash and Hester. I sat in a chair and watched the men work along with Paul Lengel from Pensylvania, J.D. Singletary and Douglas Tucker from Riverview who told me he had been coming to the sugar cane boil for more than 30 years.

Two to three pots are made a day. The syrup is a whitish color when poured into the bottles, and slowly turns into the final caramel color.

We stopped after the second boil to eat sausage and use the fresh syrup on homemade biscuits.

It was a long, interesting day -— a first for this journalist. It was getting dark again as I arrived back in Ruskin with my home-made cane syrup.

Cane syrup is made at this location every year beginning on the second Saturday in December. They do not advertise, but people just know that it is there. Before the day was over hundreds of people arrived, some from Ocala, Bradenton, Tampa, and the east coast of Florida, plus neighbors who came to help.

Bottles of cane syrup are ready to be capped. The sweet, caramel-colored confection is a delicacy now and was a necessity in generations past as a source for sweetening foods and beverages. JONIE MASCHEK PHOTOS