Pups with parvovirus now have

a fighting chance at county shelter 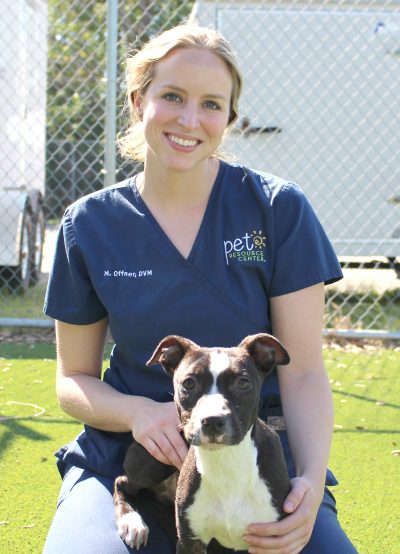 Photos from Hillsborough County
Veterinarian Mallory Offner spent time in Austin, Texas receiving special training on how to treat puppies at the Hillsborough County Pet Resources Shelter for parvovirus. The extremely contagious and sometimes deadly virus used to be an automatic death sentence for the shelter puppies. So far, a handful have been treated and adopted. A grant from the nonprofit Maddie’s Fund paid for Offner’s training.

For years, people have been heading to the county animal shelter in search of puppies, something it rarely has up for adoption. And when it does, they have new homes within about 24 hours.

Sadly, for years now, more puppies have been euthanized at the shelter than put up for adoption due to the often deadly parvovirus (parvo).

That’s all changed, though. One of the Hillsborough County Pet Resource Center veterinarians received special training recently to treat parvo and give those puppies a new chance at life.

Veterinarian Mallory Offner is now training the other shelter vets and the rest of the shelter’s staff on how to care for parvo puppies. A special isolation unit has been established for their treatment.

Last year, 26 parvo puppies came to the shelter and had to be euthanized. This year, instead, four puppies have been treated and found new forever families. A fifth puppy is currently in treatment.

“I did an internship after school in San Diego at the Humane Society and they did great treating parvo puppies,” Offner said. “When I came here, they didn’t do that.”

Maddie’s Fund, a nonprofit that raises private funds for shelter medical supplies, offered her a scholarship for parvo training in Austin, Texas. “I went last November for a four-day training. I spent four days at Austin Pets Alive where they treat several hundred cases every year in their Parvo ICU (intensive care unit).

“Now we have the vet staff and shelter staff working with the puppies,” Offner said. “Our vet techs do treatments for the puppies every day and animal care staff go back at least twice a day to clean and feed them and for basic husbandry. One person from each section a day works with the puppies.”

“We now get to save more lives, and we have puppies that are adoptable,” said Lori Letzring, customer service manager at the Pet Resource Center on Falkenburg Road.

SUCCESS STORIES:
The Pet Resource Center on Falkenburg Road in Brandon is one of only a few public shelters that can treat puppies infected with the parvo virus. In the past, most puppies that came in with parvo had to be euthanized. It’s still a dangerous virus, but the first successfully treated puppies at the shelter are ready for adoption. Snowie, Barkley and Negan are pictured here.
Photos from Hillsborough County

Parvo is tricky, because it affects a puppy quickly. “Most deaths occur within 72 hours,” Letzring said. “Every year we receive puppies that come in to the shelter that are infected with parvo, and it is a devastating diagnosis, almost always leading to death, especially at public shelters.”

Now, she said, the puppies are being cured and pampered and put up for adoption.

Treatment for parvo consists mostly of supportive care, Offner said. “Fluids, anti-nausea meds, syringe feeding, antibiotics. The virus interferes with the immune system and makes them vulnerable to other infections.”

A combination of a lack of resources and the contagious nature of the virus has prohibited the county shelter from offering this type of care previously, she said.

“Last year and the beginning of this year we set up an isolation ward. We’ve got about six dog kennels, full size. It’s in its own room. We only have one entrance we use,” the veterinarian said. “We also have all of our staff wear special protective gear. They put on boots and Tyvek suits (similar to a disposable gown, but a whole zip-up suit). Everything comes back off before they leave the isolation unit to ensure the virus does not spread.”

Parvo is spread from one dog to another, she explained. “It can survive a long time in the environment. If someone had a pup at their house with parvo, it might contaminate bedding and food dishes.” It can also linger at dog parks and pet stores, Offner said.

The symptoms are general lethargy, lack of appetite, vomiting and diarrhea. It can affect adult dogs also, but usually it’s found in puppies or young adults.

“Everyone’s been really supportive of the new program,” Offner said. “The techs really like seeing the puppies get adopted after they’ve been so sick. We have a new vet starting in May who will also be trained.”

“By having the parvo ward and treating puppies, we are able to save lives and also have puppies adopted out,” Letzring said. “Puppies are in demand. People obviously come to the shelter looking for them. And we wanted to try to save the puppies we do get.

“Once a puppy is on the adoption floor for people to meet and greet, they are adopted within 24 hours, or at least the vast majority,” she said.

To learn more about how to rescue a shelter animal, visit www.hillsboroughcounty.org/en/residents/animals-and-pets/pet-adoption/adopt-a-dog-or-cat.