After helping thousands break the cycle of poverty over the last 30 years, a major self-help organization is hoping to expand to South Shore with an office in Riverview in the fall that will serve up to 500 people a month.

“There is a huge need there,” said Eleanor Saunders, ECHO’s executive director.

Founded in 1987, ECHO (Emergency Care and Help Organization) has helped more than 250,000 people, mostly families. It has grown into one of the largest and most respected charity groups in the Tampa Bay area, helping families with emergency food and clothing and back-to-work programs. The group expects to serve more than 16,000 people this year, a 2,000 increase over 2017. 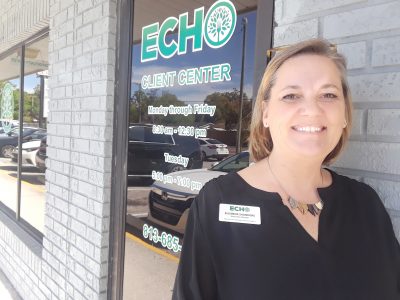 Eleanor Saunders, ECHO’s executive director outside the group’s Brandon headquarters, hopes to open a new branch this fall in the Riverview area that will serve 6,000 clients a year with emergency food and clothing initially.
KEVIN BRADY PHOTO

While based in Brandon, 25 percent of ECHO’s clients come from South Shore, Saunders said. “Of all the people we help, 25 percent drive in from the South County area — Riverview, Gibsonton and Progress Village — and that’s why we want to get out there and help. You have a few food banks out there but I think they come to ECHO because it’s not just a box of food — they get 20 pounds of food but it’s not an ongoing food pantry.”

The Riverview facility, around U.S. 301 and Riverview Drive, will cover 3,500 square feet. “It will only cover emergency food and clothes to start, but as the work grows we will introduce our back-to-work programs,” said Saunders, who expects to serve 6,000 clients in ECHO’s first year in South County. The group is currently working out the details of the lease.

“The reason most people come to ECHO is because they are under-employed or unemployed so that is why we focus on back-to-work programs. What good is it if we just feed people and give them no other opportunities to provide for themselves?

“Ever since I was 16 I knew I wanted to work with the poor,” said Saunders, who joined ECHO as a volunteer in 2006. She was named Center Director a year later and has since picked up numerous awards including recognition as a Hometown Hero by the Tampa Tribune as well as Fox 13 News.

ECHO also recently took home the $25,000 first prize at the Tampa Bay Social Venture Partners’ competition for social entrepreneurship. The group earned the top prize for its ECHO Handmade program, which sees upscale donations that might otherwise be destined for salvage turned into artisan products like purses and jewelry. The program employs former ECHO clients to make the goods. “So not only are we using excess clothing donations, we use them to make wearable accessories for men and women, which we sell, and all the people who work in those programs come straight out of our back-to-work programs.”

With an annual budget of $1.5 million — $1 million of that in-kind donations — 92.3 percent of ECHO’s budget goes to programs with only 7.7 percent to administrative costs and fundraising. The group counts Bank of America, Wells Fargo Bank and Publix among its corporate supporters and depends on grants, individual donations, Saturday morning thrift sales and other fundraisers.