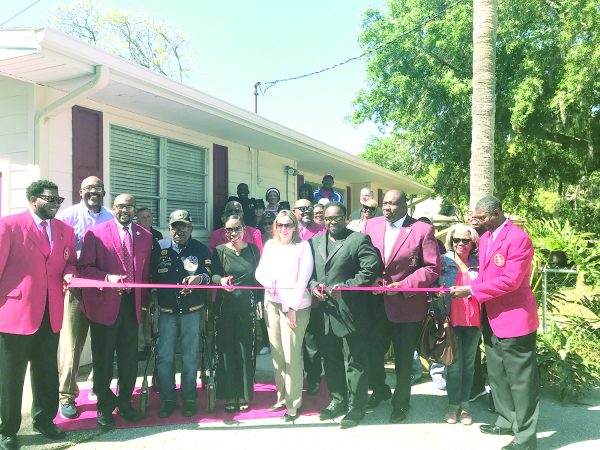 The Steve L. Lewis Community Center was dedicated on Saturday, March 24. Honored guests included Manatee County Commissioner Charles Smith District 2, who issued a proclamation honoring Lewis. Commissioner Smith was honored to issue the proclamation to his former elementary school teacher. Another proclamation in honor of Lewis was issued from Shelli Freeland-Eddie, Mayor the City of Sarasota. Manatee County Clerk of Circuit Court Angel Colonessa brought special greetings, and Lakewood Ranch High School Social Science teacher Dave Frantz gave guests important history insights on how and why honoring Lewis is extremely important to the record of American history. Polemarch Omar Edwards gave honor to Lewis as a trailblazer in the community and stressed how communities should give its legends their flowers while they are living.

Vice-polemarch and foundation president Keenan Wooten informed the audience about a documentary, biography and children’s book that is being developed in honor of Lewis and the legacy of his life.

Lewis, 96, recalls vividly what it was like to serve in one of the last segregated units of the Armed Forces.

“The Army set up a reserve corps where every male in college could [enlist] and at the end of a year of training, you would go to the Army,” said Lewis. “We were in it for about a year when they needed some more soldiers. All the boys had to go on furlough and get ready for the war.”

In 1943, Lewis was randomly assigned to the 9th Cavalry Regiment in Fort Clark, Texas. The regiment was formed after the Civil War and primarily used to escort settlers along the western frontier, and to fight in the late 19th Century Indian Wars. The Cheyenne Indians used the nickname “buffalo soldiers” to describe the black soldiers’ appearance and bravery.

Lewis was trained to ride and fight on horseback. However, the demands of war engagement quickly changed with the introduction of armored tanks. The 9th Cavalry Regiment was deactivated and transformed into a transportation service corps that provided supplies to other units.

“I came home after three years, ten months and six days,” said Lewis, who returned to Florida A&M University to complete his agriculture degree on the GI Bill. He also joined the Alpha Xi chapter of Kappa Alpha Psi Fraternity, Inc. “It was fun going back to school. Mostly all of the boys had been in the service, so no one paid any attention to us. I didn’t know anything about the term Buffalo Soldiers until I got back.”

Lewis went on to teach for more than 30 years in the Palmetto area. Today, he serves as an active member of the FAMU NAA Sarasota-Manatee chapter and is a charter member of Sarasota (Fla.) Alumni Chapter of Kappa Alpha Psi Fraternity, Inc. The Sarasota (FL) Alumni Chapter is honored to continue their community advocacy by naming the community center after Steve L. Lewis, U.S. Army Veteran and a true American hero.