Man Down, Man Up Missions fundraiser 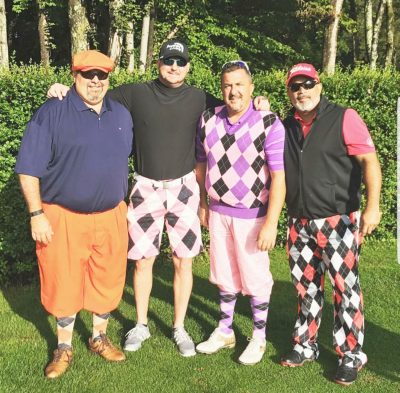 From left, Steve Colquet, Clyde Jensen, Dave Carney and Rob Santos formed a foursome at a past golf tournament fundraiser for Man Down, Man Up Missions, Inc.

Never say die to this man on a mission with a big idea to make his community better.

Clyde Jensen came up with a big idea in 2016 — to purchase a mobile shower unit to help those on the streets who don’t have easy access to a place where they can clean up. If they can’t come to the shower, bring the shower to them, or so it goes.

So far, he’s about halfway there and is hoping an upcoming golf tournament will help him reach his goal of $42,000.

Jensen, who started the nonprofit Man Down Man Up Mission, Inc. is hoping to get 100 golfers, at minimum, to help him make this goal.

In October 2017, Jensen, the former owner of Cherry’s Bar and Grill in Riverview and Plant City, hosted the Cherry’s Summerfield 10-Year Golf Tournament Reunion. But he still has a long way to go to raise the needed funds for his mobile shower unit, which will have six stalls.

He had planned another tournament for this past October, but Hurricane Irma came crashing through the Tampa Bay area and flooded those plans, he said. Some of those who had signed up to play were construction workers who had to hit the road to help put hard-hit areas of Florida back together.

“That’s why I moved it to April this year, but I still need to get a lot of golfers signed up,” Jensen said.

Jensen first got the idea of getting a mobile shower up and running when he saw an article on the internet about a man in Texas who had built one. He eventually learned about a nonprofit group in South Florida called Live Fresh that had found a manufacturer. If he orders his unit by September, he’ll get the $42,000 trailer, a discount compared to the usual price, he said.

Since last year’s tournament, Jensen has held several small fundraisers and received a $10,000 donation from a family foundation that wishes to remain anonymous.

Also, people in the community read about his venture last year in The Observer News and contacted him about renting the mobile unit for events. If he can rent it once a month for $2,000, he’ll be able to cover all costs, he said, so that’s the plan, once he gets the trailer and a heavy-duty truck to pull it.

Jensen is getting some community help for the tournament beginning with his brother, James Jensen, who is providing all the advance posters and tournament signs for free through his company Next Level Signs, Printing and Apparel.

“I am also partnered with Elite Marketing. They are like an intermediary. They sell a product called telemedicine and it’s $10 a month. It gives you the ability to call about any one of your kids, get a diagnosis and prescriptions for medication without ever making an appointment. They are giving me a portion of the proceeds for everyone who signs up through my website, www.Mandownmanup.org, which is not quite up yet, or through www.mdmumgolf.com. You can also sign up on my Facebook page.”

Students from the Boyette Springs Elementary School gifted program will hand out water during the tournament to get credit for their community service, and they’re donating the water.