Adventure is his middle name 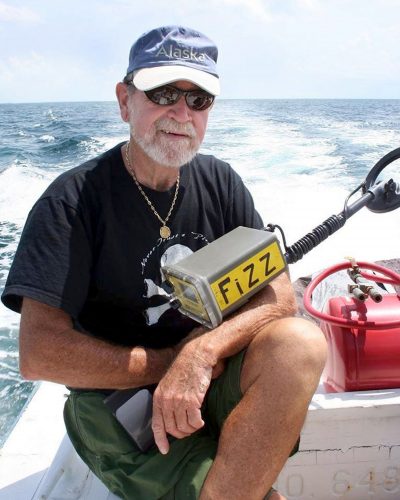 Carl “Capt. Fizz” Fismer is a modern-day treasure hunter who has explored shipwrecks for decades in uncharted waters in the Caribbean and off Central and South America, Sri Lanka and Florida. He’s shown here with a metal detector he uses in his work.
ROBERT LEWIS KNECHT PHOTO

If you’ve never met a real-life treasure hunter, you’ll get the chance April 6 at the next meeting of the Sun City Center International Forum. The gathering starts at 9:30 a.m. in the Florida Room at the Atrium, and the community is invited.

Carl “Capt. Fizz” Fismer, its guest speaker, will talk about his fascination with shipwrecks, how he got started hunting their treasures and founded the Spanish Main Treasure Co., which he still owns and operates.

This guy is the real deal.

Born and raised in Hamilton, Ohio, Fismer served as a paratrooper in the U.S. Army from 1958 to 1961, worked for General Motors for nine years, and then moved to Sarasota, where he joined the fire department and became a member of its scuba team.

When the team accidentally anchored over the shipwreck of a modern mini-freighter and removed its copper (which is unsafe for a marine environment), the seeds of his future were planted.

“I went to the library and read everything it had on shipwrecks, treasure hunting, pirates and Spanish galleons,” Fismer said. “I must have read 30 books.”

That’s when the bug bit, he said.

He bought a boat and went on solo treasure-hunting expeditions but wanted to dive with experienced treasure hunters.

So Fismer began trading shifts with his teammates at the fire department to take five days off at a time to travel down to the Florida Keys. On one such trip, he drove to the home of Art McKee, the father of modern-day treasure hunting, found him riding his lawnmower, introduced himself and said he wanted to work for him for free to learn the business.

“He looked at me and asked, ‘What else can you do beside dive? Do you have a 100T captain’s license? Can you work on small engines? Do you have any medical training? Can you cook 15 meals twice a day?’” 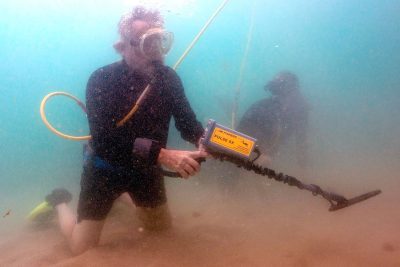 In addition to scuba diving, Carl “Capt. Fizz” Fismer snorkels and hookah dives, where he is submerged under water and breathes compressed air through a long tube attached to a metal tank aboard the boat.
GENE PAGE PHOTO

Fismer couldn’t do any of those things, so he wasn’t of much use to McKee. Undaunted, he returned to Sarasota, and over the next two and one-half years, he became skilled and/or accredited in each.

The call of the sea continued to beckon. Armed with his 100T license and trained as a paramedic, Fismer returned to the Keys, found McKee (once again riding his mower) and reported all his new skills.

“You’re going on our next trip,” McKee told him.

While working at the fire department and travelling frequently to the Keys, Fismer explored the Spanish shipwrecks of 1733 with McKee and learned the treasure-hunting business. They found a few coins and a gold ring, turned them into McKee’s backers and “almost broke even,” Fismer said.

“That got my blood pumping,” he said.

Venturing out on his own:

In 1980, Fismer and his wife, Roberta, aka “Scooter,” moved to the Keys and founded the Spanish Main Treasure Co. Over the years since, Fismer has explored all kinds of shipwrecks and collected thousands of Spanish reals, pieces of eight and religious and other sunken artifacts.

Even today, he goes on excursions, looking for treasure in the waters between Fort Pierce and Sebastian, which he calls “the best in Florida for metal detecting.” His next trip will be in May, and he’s already looking forward to another dive. 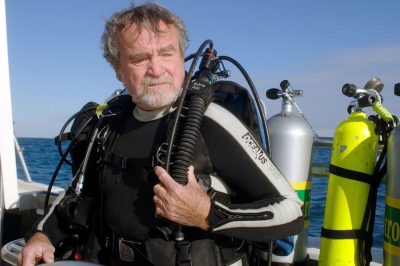 Carl “Capt. Fizz” Fismer is an experienced diver who started his underwater adventures as a member of the Sarasota Fire Department’s SCUBA team. In 1980, he founded the Spanish Main Treasure Co., which he still owns and operates.
GENE PAGE PHOTO

“Treasure hunters return to the public domain countless thousands of coins and artifacts lost for centuries,” Fismer said. “I get as much of a kick out of finding a piece of terracotta pottery as I do precious metals. Every piece is a part of history.”

Capt. Fizz has been on the cover of 24 magazines and has penned many articles. He’s hosted several television shows, is the curator of two museums, author of two books and is available as a public speaker at schools and other organizations. By all accounts, he’s a fascinating fellow.

The Fismers moved to Sun City Center three years ago and live in the Verona community at Renaissance. They’ve been married 44 years and have two children and three grandkids. 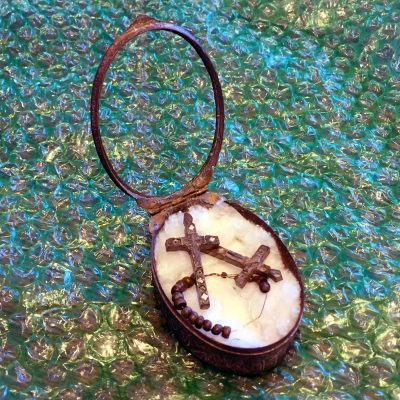 Coins are not the only treasure”Capt. Fizz” finds. Shown here is a religious artifact called a reliquary, a container of holy relics.
LOIS KINDLE PHOTO 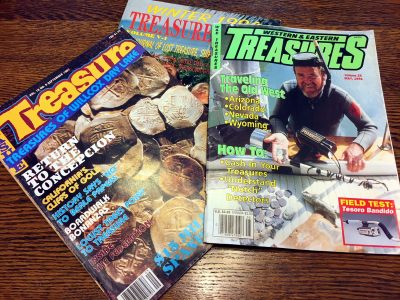 Fismer has had articles written about his treasure-hunting expeditions published in 25 different publications.
LOIS KINDLE PHOTO 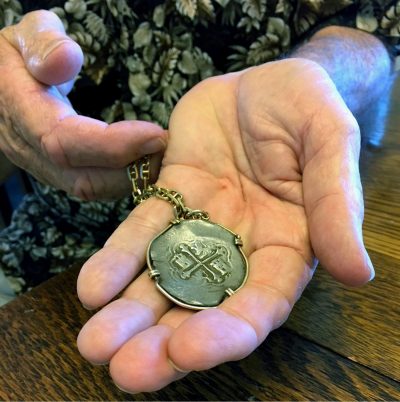 Carl “Capt. Fizz” Fismer, of Sun City Center, has found thousands of Spanish reals like this one, which was taken from the wreck of The Concepcion, sunk in 1641 off the northeast coast of Hispaniola.
LOIS KINDLE PHOTO