Sun City Center octogenarian a role model for others 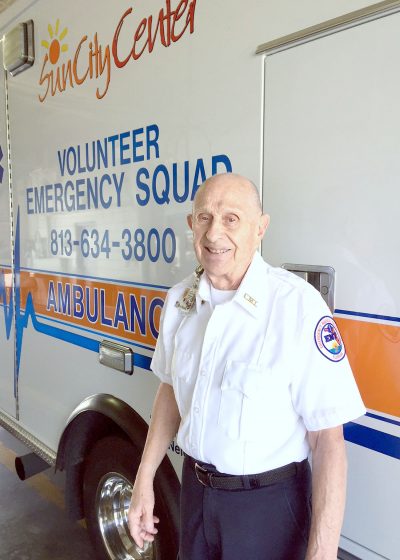 Dan Marotta, 80, encourages other seniors to join the Sun City Center Emergency Squad to help fulfill its mission of serving the community. He’s been a squad member for the past 10 years and said he enjoys every minute of it.
LOIS KINDLE PHOTO

Don Marotta enjoys serving the community. The 80-year-old Kings Point resident is an emergency medical technician with the Sun City Center Emergency Squad, and he absolutely loves it.

“I joined the squad 10 years ago, after seeing a truck (ambulance) with a sign on it calling for volunteers,” he said. “I decided to give it a shot and become an emergency medical responder. I thought that would be as far as I would go.”

But when Marotta realized how much of a comfort he was to people during their times of need and how indispensable and highly valued the squad’s services were to the Sun City Center community, he decided (in 2011) to become an EMT. He trained at the squad’s expense at Hillsborough Community College Southshore and took on the leadership role on his ambulance team at night. He works an eight-hour shift every eight days.

“I’ve loved every minute of it since,” he said of his volunteer job. “It’s so rewarding to know you helped save someone’s life or made them happy when you responded to their call.”

Marotta, a retired Sears service technician and six-year U.S. Army reservist, moved with his wife, Mary Jane, from Pittsburgh to Sarasota in 2000 and then to Sun City Center in 2003. Last November, the snowbirds decided to stop travelling seasonally between Florida and their home in Pennsylvania. Marotta and his bride of 53 years now are permanent residents of Kings Point. They have no children.

That doesn’t mean, however, the couple is alone.

“You make so many friends on the squad,” Marotta said. “We’re all like one big family.”

Marilyn Navarro, also an EMT and the squad’s assistant chief of public affairs, has grown to love the guy. They’re both members of Team 1 and usually work different hours on the team’s 24-hour shifts.

“I was impressed with him from the day we met,” she said. “He’s been such a terrific mentor to some of us and an inspiration to us all. He always has such a positive attitude; he motivates our entire (40-member) team.”

Marotta encourages other area seniors to pitch in.

“You’re never too old to learn, and it’s important to keep your mind active,” he said. “The squad has so many different positions besides those on our ambulances, so there’s basically something everyone can do.” 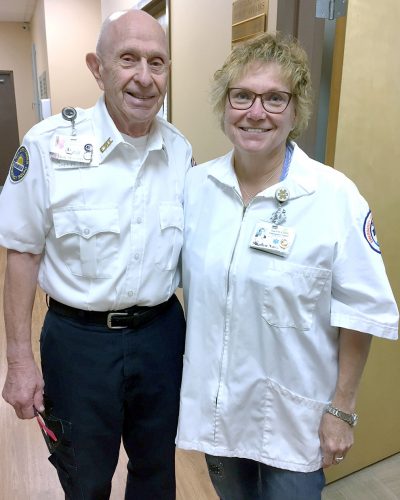 Emergency medical technicians Dan Marotta and Marilyn Navarro have become fast friends since serving together on the Sun City Center Emergency Squad’s Team 1. “I was impressed with him from the day we met,” she said.

In addition to van and ambulance drivers, EMTs and EMRs, volunteer squad positions include cooks; dispatchers; receptionists; blood pressure technicians; information technology specialists; mechanical and administrative support personnel; and more. Training and uniforms are provided for all. No prior medical experience is necessary.

All services, including daytime van transport to medical appointments for wheelchair patients, blood pressure checks and the loan of wheelchairs, walkers and canes are free.

For more information on the squad or to volunteer, visit www.sccems.com, call 813-633-1411 or stop by 720 Ray Watson Drive during business hours. Donations are always appreciated.