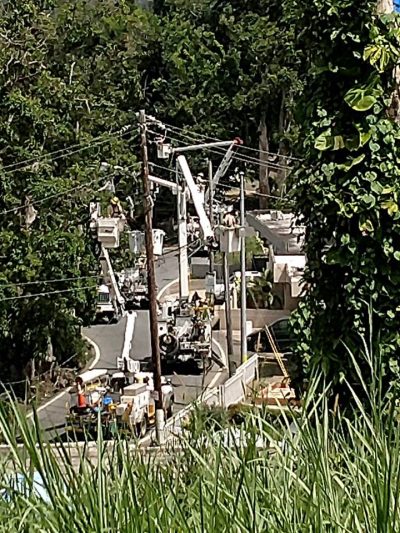 “This was the longest — and one of the most rewarding mutual assistance trips Tampa Electric has participated in,” said Gerry Chasse, Tampa Electric’s vice president of Energy Delivery. “I’m proud of the dedication of our team members — working 16-hour days with few days off. They take real pride in the work they do and are so pleased to have been an integral part of the restoration efforts for such grateful people.”

About 25 Tampa Electric line workers and support personnel began work in Puerto Rico in mid-January. They spent about nine weeks working in difficult terrain under challenging circumstances to help restore power to about 7,000 island residents.

Within days of being onsite, TECO crews earned a reputation for being hard workers. Local residents gave the crews a warm welcome and shared stories and gestures of gratitude throughout their visit.

In addition to their restoration activities, TECO team members found other ways to help the Puerto Rican communities. One lineman rescued a dog, and other crew members donated their extra supplies of drinks and snacks to a local orphanage, Casa de Niños Manuel Fernandez Juncos.

Six months after Hurricane Maria ravaged Puerto Rico, about 90 percent of the island — or more than 1.3 million customers — now have electricity restored. 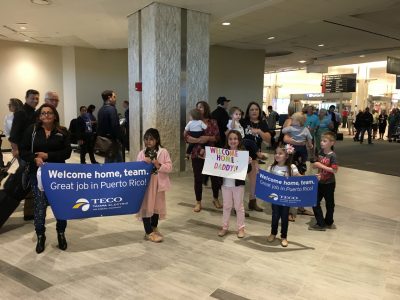 Tampa Electric is one of several members of the Edison Electric Institute that provided mutual assistance to support the Puerto Rico Electric Power Authority and the U.S. Army Corps of Engineers in their efforts to restore power. Crews supporting the restoration efforts of other utilities are paid by the host utility. Bucket trucks and other vehicles traveled to and from Puerto Rico by barge. Other equipment was included as checked baggage.