Plans for a birthday bash underway for the Bloomingdale Library attack victim. It has been 10 years since the incident. 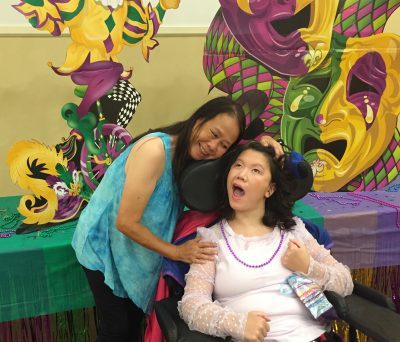 Vanna Nguyen, left, with her daughter Queena, is unveiling her memoir chronicling the past 10 years since Queen’s brutal attack at the Bloomingdale Library. Queena is the center of a 10-year celebration of life and hope to be held April 29 in Tampa.

It will be a decade in April since the world upended for Queena and her family. The day high school life came to an abrupt halt for the 18-year-old who had been preparing to head to the University of Florida on a full scholarship. The day that took away future opportunities to enjoy food with friends, walk to class or drive to the beach.

Ten years ago, Kendrick Morris, who was also a teenager, approached Queena at the Bloomingdale Regional Library one evening as she returned books. He brutally attacked her, dragging her behind the library, raping her, beating her and leaving her for dead.

While she has made much progress with nonstop therapy since the attack, there is still no more walking for Queena. No more seeing. No more talking. No more eating on her own.

The journey has been rough for her family — Queena’s mother, Vanna Nguyen and her big sister Anna Donato, who are now her connections to the world.

Despite the heartache and nonstop work it takes to care for Queena, who will soon be 28, the family plans to celebrate her birthday and her survival at the GFWC Tampa Woman’s Club on April 29 at 1 p.m.

The Ten Year Celebration of Life Fundraiser & Memoir Reveal, during which Nguyen will introduce the book she is finishing about this journey, is still in the planning stages.

The event is open to the public, and tickets can be purchased at www.queena10year.eventbrite.com.

Anyone interested in donating or volunteering can email Donato at avdonato1@gmail.com, or at www.joinqueena.com/contact. To donate funds toward the cost of the fundraiser, which go to Hope Heals the Brain Inc., visit www.joinqueena.com/donate. Share the word via social media by using the hashtags #JoinQueena, and #TheStoryLivesOn.

The reason for the gathering is obvious, Nguyen said. It is to celebrate Queena’s successes over the past decade and that they still have her in their family.

The party is also to lay out the foundation of her new book, HOPE – The Anchor for my Soul; A Mother’s Memoir of Faith, Love and Forgiveness.  The memoir is centered on Queena’s attack and the events that followed. It goes deeper, though, through her mother’s view of childhood in Vietnam and her journey to the United States.

Nguyen grew up as an immigrant who came to this country with nothing in 1980 as one of the “boat people,” who escaped the Asian island nation following the Vietnam War. The book tells of her struggles with single motherhood, as well as her ongoing struggle to help Queena recover from the attack.

Nguyen said 100 percent of the book proceeds will go toward ongoing expenses through Hope Heals the Brain, a nonprofit set up by Donato for her sister’s care, and through Queena’s Medical Trust Fund.

“From the beginning, we had a lot of help from the community, even from around the country, and on her Facebook page and website following her attack,” Nguyen said. “We had visitors from all over — all the countries. They sent prayers and money and told us Queena’s story was inspiring. Lots of inspiration.

“So many people talked to me about writing a book about Queena. At first, I thought I never can do it because of my (broken) English, and I was also busy caring for Queena,” Nguyen said. But three years ago, she dug in, working in the silence of her garage, the only space in the house she could hole up.

Now, she’s looking for a publisher. Publishers and agents, along with the general public, are invited to attend the event.

“This is my chance to get help, and to get publicity for the book,” Nguyen said. “I need to get the word out. I hope any agency out there or publisher out there hears about it and will contact me.”

Medicaid covers only $1,500 per year of Queena’s physical therapy and speech therapy, while nearly $70,000 is required annually for all the treatments that help her make progress. State funding for her home health care is soon to be cut in half, as well. These additional expenses are funded through the generosity of the community and donations from supporters.

From the very beginning of the book Nguyen addresses Queena’s attack. “I didn’t want to work around that,” she said. She had a ghost writer assist her in telling the family’s story.

“My daughter’s story will inspire you to get up and fight, regardless of what your current battle is,” Nguyen wrote in the introduction. While people may not be able to change their circumstances, she said, “you can turn your pain into purpose.”

She said her daughter’s story has been a catalyst for spreading encouragement and hope and to show that love conquers fear.

Morris is serving a life sentence in prison for his crime and will be eligible to have his case reviewed after 20 years, because he was a juvenile at the time he attacked Queena.