A parade and chili cook-off in Parrish for Heritage Day 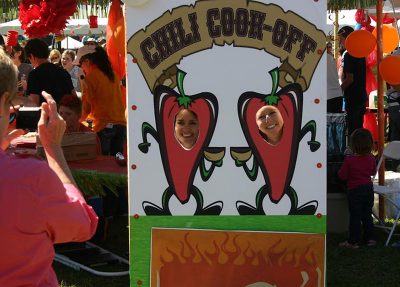 PROVIDED PHOTO
The Parrish Heritage Parade, Festival, and Chili Cook-Off has something for the whole family, including getting your photo taken as a chili pepper.

What could be better than a hometown parade?

A hometown parade followed by a community festival would be nice.

That was what Parrish resident Tami Vaughan thought after watching the Parrish Heritage Day Parade about 10 years ago.

“The parade would go as far as the Y and everyone would go home,” Vaughan said. “I mentioned we should do something after the parade ends and they said, ‘It’s your idea, and you’re in charge’”.

Since then, the annual Heritage Day Parade, Festival and Chili Cook-Off has grown into a celebration of community pride and will be on Saturday, March 3, this year.

From the festival’s beginning, Vaughan has been chair of the organizing committee.

“We had children’s activities, a live band and some food vendors,” Vaughan said.

Then seven years ago, Ben Jordan, a community activist, was talking to his brother from up North about the festival, and his brother said chili cook-offs were popular in his area, Vaughan explained.

“We decided to have one during the festival,” she said. “It was very popular, and each year it has gotten bigger.” 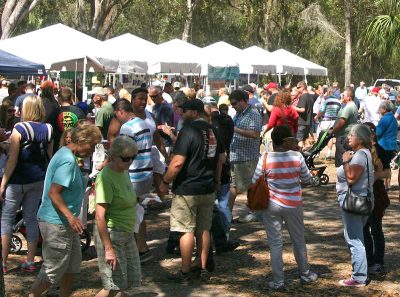 The first year had about 20 teams with about 3,000 people attending the festival.

Last year had 26 teams with more than 6,000 people attending.

“We made it an event for the whole Manatee County community,” said Mike Williamson, who is in charge of organizing the chili cook-off teams.

“This is really about the community,” said Williamson, the safety and training officer for the Parrish Fire District.

It was that community spirit that moved Jennifer Hamey to join the committee organizing the festival.

“I was at the chili cook-off last year and the vibe was really good,” said Hamey, an attorney who had recently moved to Parrish.

This was her fist year serving on the committee, and she was assisting Williamson with the chili cook-off duties.

“I joined the committee to meet people,” Hamey said, “and they included me in the process right away.”

Community spirit and pride will be on display during the parade and festival.

The Grand Marshal for the parade, which has been a community tradition for more than 30 years, will be Teresa Giles, who with her mother has owned PJs Subs, 12342 U.S. 301, for 30 years.

Giles, according to a press release, “always has a friendly word for her customers and is known to regularly give back to the Parrish community often helping families in need.”

Anyone wanting to participate in the parade with a float, antique car or favorite farm animal, can just show up behind the Parrish Fire Station, 12132 U.S. 301 N., at 9:30 a.m. 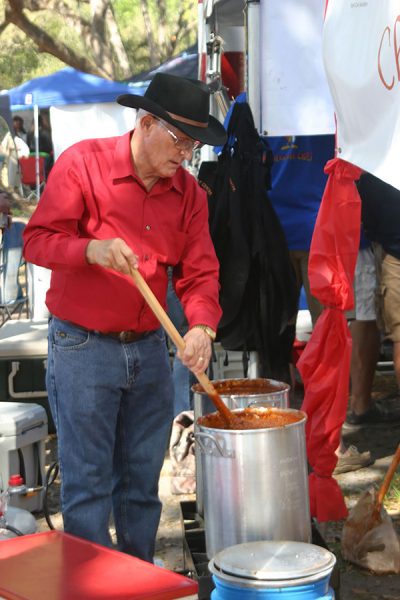 PROVIDED PHOTO
Chili Cook-Off teams start as early as 6:30 a.m. on the day of the Parrish Heritage Festival to begin cooking their special recipes.

Besides the very popular chili cook-off, the festival has activities and displays for the whole family.

There will be food vendors, a beer and wine station, a children’s area with a petting zoo, pony rides and plenty of other fun activities, train rides and a special area to highlight Parrish Pioneering Heritage.

Pearl McCraw, who is in charge of organizing the pioneer area at the festival, said there will be local artists, woodworking craftspeople, vendors selling pottery, candles, and soaps, demonstrations on quilting and spinning wheel operation, and many other history-related happenings.

There also will be scheduled readings by Parrish author Ira Worth McClain from her book, This Old House.

The book is a compilation of articles on old Parrish residents and homes she wrote for the Parrish Village News.

Visiting the early Parrish pioneer area is important to the festivalgoers because “if they don’t know their heritage, they won’t know their future,” McCraw said.

Another popular area of the festival is the vendor booths.

Local businesses and nonprofit groups will be handing out free gifts and information about their organizations.

Keeping things lively and fun will be the bands booked for day-long entertainment.

There will be five bands and individual performers, including local musicians Tom Bush, who will be playing at the festival for the first time, and Kim Betts and the Gamble Creek Band.

Also on the playbill are JD Lewis and Zetha, the Jake Castro Band and Rosewood Creek.

All of the work Vaughan and her committee of volunteers put into organizing the parade, chili cook-off and festival have paid off over the years.

“In the past six years almost $180,000 in grants have been awarded in Parrish,” Ben Jordan of the Parrish Foundation was quoted as saying in the press release.

The chili cook-off is the big draw and fundraiser of the festival, Vaughan said.

“Local groups are very interested in participating in the chili cook-off,” she said. “People are anxious to sign up every year.”

Teams begin showing up at 6 a.m. to start preparing their chili, and when the festival gates open at 11, people are lined up for samples.

A panel of judges consisting of local celebrities picks the winners through a blind-tasting process.

And the coveted People’s Choice Award, where festival attendees select their top pick of the best chili, has always been popular.

People use their admission tickets to vote for their favorite by placing it into a container at the team booth.

Tickets are available in advance for $8, and at the gate the day of the festival for $10. Children under the age of 12 are free.

There will be plenty of free parking.

“People should come to the Parrish parade, festival, and chili cook-off because it is something for families to do with the kids,” said Vaughan, “and you help raise money for the community.”

For more information about the festival, email Vaughan at FrstWordDr@gmail.com.

Or visit the festival Facebook page at www.facebook.com/ParrishFlChiliCookoff/ or on the Internet at www.parrishchili.com.