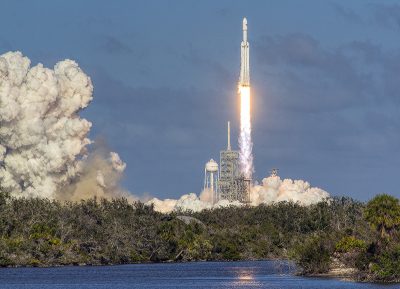 Troy McClellan / Troy McClellan Photography
After years of delays and re-designs, SpaceX made history Feb. 6, 2018, with the maiden flight of its Falcon Heavy rocket from the Kennedy Space Center at Cape Canaveral. The rocket has an unusual cargo onboard, a 2008 Tesla Roadster, which will orbit around the Sun that extends out past the orbit of Mars and well into the asteroid belt.

After years of delays and re-designs, SpaceX made history on Feb. 6, 2018, with the maiden flight of its Falcon Heavy rocket from the Kennedy Space Center. The concept was introduced to the public in 2011, and the company had targeted the debut flight to launch in 2013. The Falcon Heavy is comprised of three flight-proven Falcon 9 rockets strapped together to produce a combined thrust of over 5 million pounds at liftoff. Combining three Falcon 9s proved to be more difficult than expected. However, Elon Musk, founder of SpaceX was undeterred. His tenacity finally paid off.

The tremendous thrust of the Falcon Heavy enables SpaceX to loft nearly 64 metric tons into Earth orbit. To put that in perspective, it is comparable to the mass of a commercial 737 jet airplane full of fuel, passengers and cargo.

The large Falcon Heavy rocket, with 27 Merlin engines, rose from Launch Pad 39A on a column of fire at 3:45 p.m. on a warm, sunny Florida afternoon. This is the same historic launch pad that sent the first men to the Moon in July 1969 and hosted 82 Space Shuttle launches. Shortly after the Falcon cleared the tower, sound began to thunder across the press site, just a little over 3 miles from the pad. As the ground shook with the force of the accelerating rocket, the possibility of a catastrophic explosion remained a real possibility. Even Musk cautioned that it could happen.

As the rocket streaked higher into the upper atmosphere, thoughts of disaster were replaced with a sense of wonder and amazement. In just a few short minutes the two side boosters would come roaring back to a landing at Cape Canaveral in a fashion depicted in a science fiction novel, or movie. The company has had incredible success in landing boosters back at the cape and on their landing barges in the ocean, but they had never attempted to land two boosters at the same time, within a few hundred feet of each other. 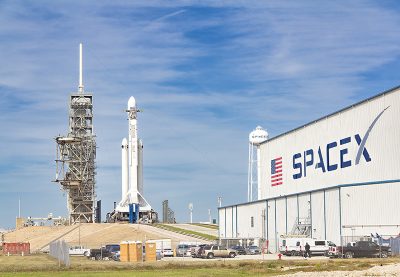 We held our breath as we watched them streak back toward the ground. They announced their arrival with six sonic booms that echoed across our viewing site. As they neared the ground, the engines burned to slow them to a gentle descent and with the landing legs unfolding, they gently nestled onto the landing pad within a few seconds of each other. What makes this flight even more astounding is that the two side boosters had been previously flown, landed and refurbished. It was surreal. SpaceX did it. They accomplished what some thought was not possible.

This was a test flight in every sense. Musk, who is also the founder and developer of the Tesla electric car, put his personal 2008 Tesla Roadster on board and into an orbit around the Sun that extends out past the orbit of Mars and well into the asteroid belt. Even though the center core booster did not make its intended landing on the barge in the Atlantic Ocean, it was a very successful flight. What other car company can top the marketing campaign of the first car in space, and that it will have over 257 million miles on it?

Falcon Heavy is now the most powerful heavy-lift booster in the world and the only one capable of reuse. Musk claims that SpaceX will be able to provide lower cost to orbit than its competitors, and they are well on the way.