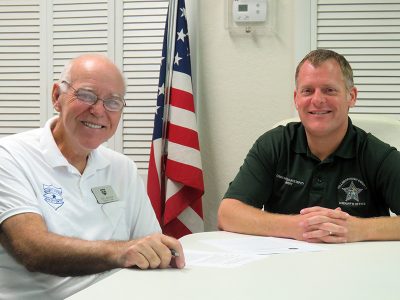 Yes, as might be expected, Sun City Center has its share of “wanderers” with cognitive disorders. State statistics say that over 500,000 Floridians have Alzheimer’s, 70 percent are cared for in the home, and 60 to 70 percent of them will wander away at some point. Caregivers have an awesome responsibility, and it is essential that they know what to do — and when — if the person under their care is missing.

The Hillsborough County Sheriff’s Office (HCSO) responds to 9-1-1 calls about on-foot wanderers, and now, thanks to SCC’s “Neighbors Helping Neighbors” mindset, more help is available.  We have all seen the Silver Alerts that flash missing person’s information on highway message signs. That program is only for individuals in a car; missing persons on foot are a totally different situation.

Deputy Jeff Merry said he was delighted when Gil Jesse, the newly elected chief of the SCC Security Patrol (SP), proposed a Silver Alert On-Foot Search Program to find SCC wanderers. Jesse’s interest in such a program was generated by an instance a few months ago when someone called the SP for help, and the dispatcher had no clear direction on how the SP could help. That wasted precious time.

The state has published guidelines for community efforts such as this, which Merry and Jesse are finding useful in this new program. The plan is to have a civic search team ready to report as soon as the HCSO or SP is notified of a missing person. They expect to have 10 to 25 volunteer searchers that include Security Patrol vehicles, golf carts, bicycles and on-foot individuals. Team members will be equipped with fluorescent vests, two-way radios, cell phones and flashlights if needed. Jesse said that carts will be especially helpful to search SCC’s golf courses. The carts will probably have bonnets identifying them as part of the search team, which would be helpful when a helicopter is involved.

“It is important for caregivers to recognize the importance of getting help immediately,” said Jesse. There is no required waiting period before a person can make a missing person report. Families and facilities are encouraged to call 9-1-1 immediately if their initial search does not locate the person, and they have not seen the person in five minutes. Statistics tell us that the first six hours of a reported lost person are the most critical. Of those missing more than 72 hours, only 20 percent survive.

Officials strongly suggest that caregivers have pertinent information readily available. This would include a recent photo, physical description and circumstances of any prior instances (when did they wander and where were they found?) A risk guide outlining other useful information can be found at www.alzcare.org/silver-alert-lost-on-foot.

Jesse said they are still tweaking the process and putting together the roster of team members. Anyone interested in volunteering should call him at 813-642-2020.