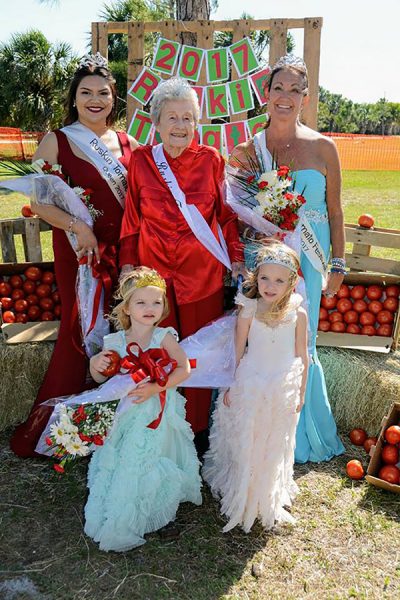 The Ruskin Tomato and Heritage Festival is looking for a queen or four to grace the grounds of E.G. Simmons Park this year. Unlike Game of Thrones, you don’t need an army or dragons for this crown, just some poise and grace.

The festival is now accepting applications for the pageant queen, who will be crowned in April at the event, which is expected to draw more than 5,000 people. Organizers are also looking for volunteers and sponsors for the festival, which includes an arts and crafts fair, children’s play area, live music as well as tomato dishes and tomato “chow down.”

Four festival queens will be chosen in the age groups 5 to 12, 13 to 19, 20 to 40 and 41 and above. The deadline for qualification is April 14. Contact mariahdiehl@gmail.com for more information.

A South County fixture since the 1930s, the festival was the social highlight of the year and included a rodeo and giant tomato fight between boaters and those on the land.

“From 1934 until the early 1950s, the major social event of Ruskin’s year was the Tomato Festival. It combined features of a county fair, beauty pageant and a political rally,” according to the booklet, A Brief History of Ruskin.

“It has a lot of tradition and more of a family-orientated event,” said Sandy Council, president of the Ruskin Community Development Foundation, organizers of the festival. “We are losing a lot of our agricultural land, but it’s important to remember that heritage of the farmers and the migrant workers.”

With no shortage of spring festivals in the bay area, the Tomato Festival remains unique because of its history and authentic feel, said Joe Zuniga, an event organizer.

The child of migrant farm workers who followed seasonal groups across the U.S., Zuniga’s family settled in Ruskin where he attended local schools before earning degrees from Hillsborough Community College and the University of South Florida. An author, award-winning Latin music singer with his own marketing company, Zuniga lives in Ruskin.

“My dad was a crew leader (foreman) picking tomatoes and I did that as well — picking tomatoes. I grew up in that environment, and the Tomato Festival was also a celebration of that agricultural culture,” Zuniga said.

Proceeds benefit the Ruskin Community Development Foundation, a nonprofit group promoting Ruskin. The group sponsors community events throughout the year including a Hispanic Festival planned for September. The festival was cancelled last year due to Hurricane Irma.

For more information on the festival or to volunteer or sponsor, email Zuniga at info@zunigamarketing.com. 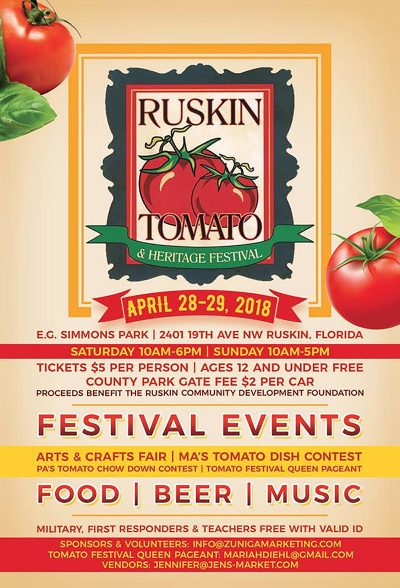