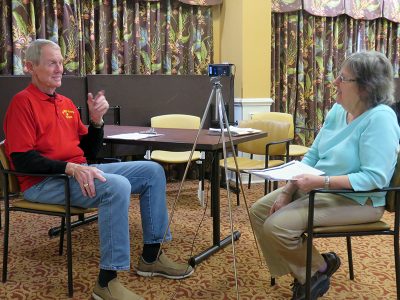 BILL HODGES PHOTO
Kings Point resident Randy Robinson shares memories of his 21 years in the U.S. Marines for preservation in the Library of Congress with Deborah Decker, a Red Cross volunteer.

Nancy Robinson thought it would be good for husband Randy, to preserve memories he had about his 21 years in the U.S. Marines. She encouraged him to participate in a program sponsored by the Library of Congress that gave him that opportunity. It’s called the Veterans History Project.

The Tampa Bay Chapter of the American Red Cross partnered with the library to capture first-hand accounts of veterans who served in any branch of the U.S. military in any capacity, from World War I through the present. Civilians who served in support of a U.S. war effort in a professional capacity are also welcome to participate. The stories are recorded and stored in the Library of Congress. The participant also gets two copies.

Hundreds of veterans have seized the opportunity to tell their stories since the program started a dozen or so years ago. Following his recording session on Jan. 19, Randy Robinson, 60, said that he had been reluctant to participate but now is glad he did. During the recording, Robinson recounted his experience in Vietnam combat action as a “very young” Marine. He said memories surfaced that he hadn’t thought about in years as he talked to Deborah Decker, the Red Cross volunteer who interviewed him. Robinson had enlisted in the U.S. Marines when he was 17 and a senior in high school.

Decker is one of several interviewers in the Tampa Bay area; she became a Red Cross volunteer for the sole purpose of working with this program.  When a friend told her about four years ago, she got so excited that she went to Washington to learn more about it from the Library of Congress. “They rolled out the red carpet for my daughter and me,” she said.

Decker, who has never lost enthusiasm for the program, has this message to veterans: “You have to do this for your family.” Since the participant gets two copies of the interview, it becomes part of that family’s archives. She can cite example after example of why they should, and she shared this one. One veteran I will call “Mr. Carter” recorded his story and passed away shortly thereafter. It was played at his memorial, and since he had shared very little about his military experiences with his family, most were hearing about them for the first time. That made for a very moving and memorable event.

Red Cross provides the interviewers and equipment for the interviews that are conducted at several locations throughout the area. In Sun City Center, Decker conducts interviews at Sun Towers Retirement Community, 101 Trinity Lakes Drive.  With her laid-back manner, she keeps the interview casual and conversational. “Veterans find it a release to talk to someone they will never see again but is interested in what they have to say. It is a cathartic experience for many, and they walk away feeling better,” she said. She assures them that if they aren’t pleased with the resulting video, it won’t be submitted to the Library or it can be repeated if they want to try again.

“Since we started recording in Sun City Center, the local program has mushroomed,” Decker said. “Veterans in this area have really embraced the idea of having their memories preserved.” The sessions can be as long as the veterans want to talk. She said they are usually about an hour but has had some run two and one-half hours. Veterans are encouraged to bring along any (unpublished) pictures, journals, logs they wish to have stored in the Library of Congress in climate-controlled vaults.

Veterans do not have to live in the area to be recorded in SCC. To get on that schedule, however, usually the third Friday of the month, call Kathy Williams (Sun Towers) at 813-634-3347. To find another more convenient location in the Tampa Bay area, call the Tampa Red Cross contact, Lou Rodiquez at 813-868-7625.

Finding Florida with a paddle down a river