Home News Finding Florida with a paddle down a river
News

Finding Florida with a paddle down a river 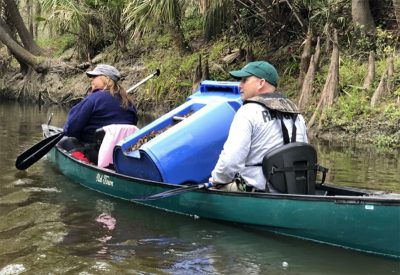 HILLSBOROUGH COUNTY PHOTO
Gus and Patsy Howerton canoe with a mission having a recycling bin aboard.

Dipping a canoe or kayak into Medard Reservoir in the late afternoon and slipping out into the brown water, visitors can view nearly every freshwater wading bird species in Central Florida.

From great blue herons to cormorants, roseate spoonbills and snowy egrets, the reservoir on the outskirts of Plant City, created from former phosphate mines, welcomes them all, along with some 220,000 humans who visit the park annually.

Just recently, Edward Medard Conservation Park, one of the most popular parks in the county, has begun offering guided sunset canoe and kayak tours once a month, taking visitors past various small islands used as bird rookeries, out into open water, then over to an observation tower.

Canoe tours are also being offered at Lithia Springs Conservation Park, another of the county’s most popular parks.

The tower at Medard is only accessible by canoe or kayak since Hurricane Irma blew through in September, said Chris Kiddy, program coordinator for the county’s Conservation & Environmental Lands Management department.

“What’s really great about it is that it is a really short trip about 2.5 miles,” Kiddy said. “It starts near the ranger station, then goes through a little series of tiny islands filled with birds. Everywhere you look, there’s a wading bird.”

We’ve seen black-crowned night herons and a lot of black vultures and turkey vultures in the park. What’s really nice is that any beginner can do the trip. It’s not strenuous. You can float along and get the view.” 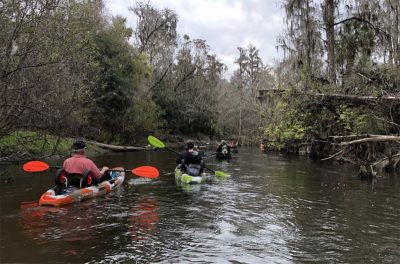 The hurricane caused a raft of aquatic vegetation to push into the park’s boardwalk that led to the observation tower, destroying it, Kiddy said. “It was a giant mat of floating vegetation you can still see today.

“Boardwalks are very expensive to build. We just don’t know yet if we will be able to rebuild it.”

During the canoe run, one of the rangers gets out and walks on the floating vegetation to show visitors how thick it is and how it could have caused such damage.  “It’s like a sponge,” Kiddy said. “It goes up and down.”

In addition to taking out the boardwalk, the storm also took down a lot of trees in the park and took out the electricity for a time. “We did have some volunteers help, but mostly it was just a lot of work for the rangers,” Kiddy said.

The next Medard trip is scheduled for Feb. 24.

For those who want to exert a bit more effort, the canoe trip down the Alafia River is about 10.5 miles and takes four to five hours. Visitors will canoe along the river, heavily vegetated on each shoreline, with a stop for lunch along the way.

Visitors catch a shuttle from Lithia Springs Conservation Park off Lithia-Pinecrest Road to the canoe launch at Alderman’s Ford Park on C.R. 39, south of Plant City. From there, they will paddle back to Lithia Springs. The next trip is scheduled for Feb. 17.

“It’s really fun this time of year because the water is low, and the limestone outcroppings create little rapids,” Kiddy said.

So many people come to these parks to picnic and never really get out to see the rest of the parks, Kiddy said. “That’s why we are doing this. People don’t realize what great places these are to observe nature.”

There is a $2 fee to enter each park.

“So far, we’re getting rave reviews,” Kiddy said. “We only do 10 to 12 people with one ranger. We try to keep the groups small, so everyone gets more of a one on one experience.

“A lot of people have lived in this area for a long time and just never realized what great places these parks are to see birds and wildlife.”