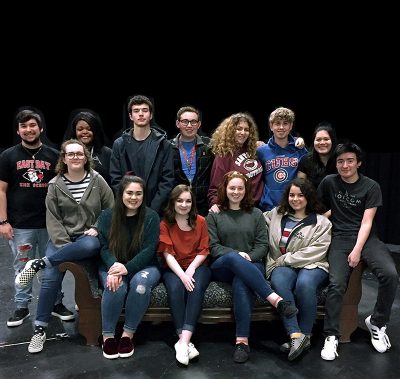 LOIS KINDLE PHOTO
The cast and crew of the East Bay High School Theatre Department’s upcoming production of Wait Until Dark gather for a group photo before a recent afternoon rehearsal. The play will be presented at the Kathryn Hill Auditorium, 7710 East Bay Road, Gibsonton, at 7 p.m. Feb. 14, 15 and 16.

Wait Until Dark by Frederick Knott will be presented by the East Bay High School Theatre Department Feb. 14, 15 and 16 at the Kathryn Hill Auditorium, 7710 Big Bend Road, Gibsonton.

Tickets at the door are $5 for both students and adults. Because of its mature content, this play is not recommended for children.

Wait Until Dark is the theatre department’s third production of the year. The suspense thriller first appeared on Broadway in 1966 and was followed by the renowned film version starring Audrey Hepburn in 1967.

Hepburn was nominated for an Academy Award and Golden Globe for her performance.

The play includes one of the scariest dramatic moments of all time, said Krista Blanchette, East Bay’s theatre department teacher and the play’s director.

“I always make sure the winter production is a small, intimate cast and a show that I really personally want to direct,” she said. “I love suspense thrillers more than any other genre. It’s what I watch in my personal time.”

Blanchette is excited to present the play to a South Shore audience.

“I’ve had my eye on Wait Until Dark for several years now,” she said. “It’s a thrilling piece of theatre that will leave the audience holding its breath until the very end. And it’s an amazing play that truly highlights the talent of the actors we have at East Bay Theatre.”

Set in Greenwich Village, New York City, in 1964, Wait Until Dark takes place in the basement apartment of Sam Hendrix and his blind wife Susy (the role Hepburn played in the film).

While her husband is away, Susy goes through a terrifying weekend as three criminals attempt to retrieve a doll containing drugs Sam inadvertently brought home from a previous business trip. The criminals pose as police officers as they try to con Susy into giving the doll back.

“I’ve never played a role like (Susy) before,” she said. “Playing a blind woman is challenging because it’s difficult not turning your head or making eye contact during my scenes.

“I love the character,” she continued. “She’s smart and brave. She showed character through adversity.”

Blanchette said the audience will be impressed with the performances of the eight-member cast.

“You’ll forget you’re watching a high school production, plain and simple,” she said. “The acting is professional quality; the set is filled with vintage original pieces that will transport you back to the 1960s; and the costumes designed by alumnus Ava Koob are fabulous.”

The East Bay Theatre Department recently competed at the District 9 Thespian Festival in October and took home 14 “Superior” ratings. In addition, seven of its talented teens presented an original pantomime that won the festival’s Critics Choice Performance and were voted to represent Hillsborough County at the Florida State Thespian Festival in March.