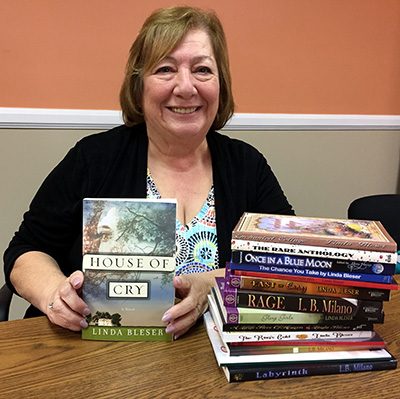 Author Linda Bleser was born to write. It’s her vocation, her passion, her first priority.

Recently, after a lifetime of writing poems, short stories and 15 books, her latest work, House of Cry, was accepted by a major New York publisher. It was a long-awaited recognition.

“I always loved reading, even as a child,” said Bleser, 65. “I always had my nose in a book. Like many kids, it was my escape.”

Her love for the printed word was so strong, it led her to begin writing short stories in the early ̓60s. But as a preteen she would put them in a drawer and forget about them.

Born in Albany, N.Y., and raised in Schenectady, Linda Milano was the oldest of three children. She graduated from Draper High School in 1970 and married the following year.

When their two children were toddlers, Bleser’s husband, Jud, urged her to get out of the house occasionally and find an outside interest. To no one’s surprise she chose to attend Joseph Bruchac’s writer-in-residence program at the library in Saratoga Springs and signed up for his writing course.

“I learned to appreciate the rhythm and meter of poetic prose, the beauty of a lyrical passage and the emotional power of one perfectly placed word,” she said.

After that, she began submitting her science fiction, women’s fiction and fantasy short stories to popular magazines, and in the late ̓90s entered a contest hosted by the New York City Romance Writers of America called Love and Laughter. Her three-chapter proposal won the top prize — having an editor read her completed manuscript.

That book, The Chance You Take, was published in 2001. In the interim, she wrote Enchanted Cottage, a romantic fantasy that a small-press publisher accepted as an e-book.

“From that point on, I had an editor and a publisher, so I stopped submitting to the big houses,” Bleser said.

House of Cry, took several years to write, and her proposals for the book received “glowing rejection letters,” Bleser said. “They loved the book but didn’t know how to market it.”

That is, until a friend with 3 Seas Literary Agency told her about Linda Scalissi, a new agent with the company she thought would absolutely want the book. Her friend was right.

Scalissi kept submitting the manuscript until
HarperCollins accepted it through its e-book line, Legends. In April 2017, the book was offered on Amazon and e-book outlets like Nook, Kindle and iBook. She was thrilled when the publisher decided to make the book a print-on-demand paperback. She received her copy in January.

Bleser is now known as a hybrid author, one who is published traditionally, through the small press or independently. Although most of her books are now out of print, Scalissi has submitted her backlist for possible publication to HarperCollins as well as Hallmark for consideration for movie production.

“My husband calls writing my hobby; I consider it my calling,” Bleser said. “Even though he teases me, his continued support has made it possible for me to pursue my passion.

“If money was my only objective, I would have stopped years ago.”

Bleser said it’s the process of discovery with each new book she writes and sharing it with her readers that she most enjoys about her craft.

“Even if I chose to retire from publishing, I would still be compelled to write,” she continued. “I can’t imagine a day going by without scribbling in my notebook.”

A Polish version of House of Cry is now available, making Bleser an international author.

“It’s way less glamorous than it sounds, but it’s exciting at the same time,” she said.

The author can be reached through a link on her website, www.lindableser.com or via her Facebook page. If you’d like to meet her in person, stop by the New Age Fair between 10 a.m. and 4 p.m. March 10 at the Sun City Center Area Chamber of Commerce, where she will autograph copies of her books.

To learn more or to place an order on Amazon, visit http://amzn.to/2GreiUP. Copies of House of Cry are available at the SouthShore Regional and Sun City Center libraries.

This chocolate-filled event is to die for