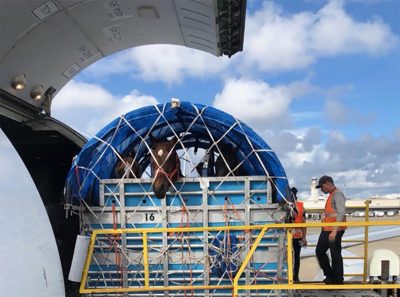 PHOTO COURTESY OF Kelly Croghan-Ford
Calimaco, right, was one of three horses flown from Puerto Rico recently by Caribbean Thoroughbred Aftercare Inc., in hopes of finding him a new home. RVR Horse Rescue in Riverview is evaluating the former race horse, then will put him up for adoption.

Hurricane Maria did more than devastate the human population when it slammed in to Puerto Rico last fall. It also devastated the animal world, including wiping out the food supply for a passel of retired race horses.

Riverview’s RVR Horse Rescue has stepped up to help, receiving one of the horses recently and expecting to take in another in February.

Calimaco, a 6-year-old Florida-bred gelding arrived in Miami by plane Jan. 20 and after going through quarantine, was trucked to RVR where he is undergoing evaluation and will soon be available for adoption.

“Calimaco is almost done with his rehabilitation. He will rest for a few more weeks, but will be available for adoption very soon,” said Lisa Gold, RVR’s vice president.

Caribbean Thoroughbred Aftercare Inc. a nonprofit in Puerto Rico that cares for retired races horses to give them a chance at a second career, needed to shed many of its wards due to the lack of supplies in the island nation following the hurricane, said RVR spokeswoman Kelly Ford.

“There are still pretty devastating circumstances down there,” Ford said, referring to the hurricane-ravaged island. “They’ve been doing a phenomenal job of taking care of the horses in very difficult circumstances, but all of the hay fields were destroyed during the storm.”

“What they are looking to do is the horses that were born in the U.S., they are trying to send them back to the mainland and get them adopted so they have fewer horses to care for as the island gets back on its feet.”

RVR Horse Rescue is already experienced in caring for thoroughbred horses. It is accredited by the Thoroughbred Aftercare Alliance. In addition to Calimaco, RVR has three former race horses going through rehabilitation and one, Jaime, already available for adoption. 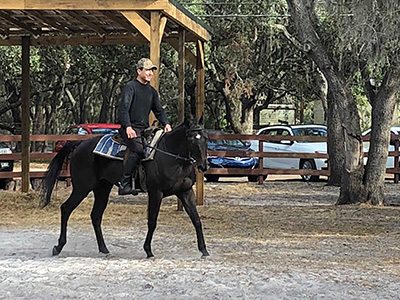 A second horse flown over from Puerto Rico was to have joined Calimaco, but could not pass quarantine due to a parasite — RVR is still committed to taking at least one more horse, Ford said.

Caribbean Thoroughbred Aftercare is also seeking other nonprofits in the United States to take some of its horses. It is also working to raise funds to ship the horses, which costs about $3,000 per horse. All donations are federally tax exempt, with 100 percent going to the care and re-homing of the horses. To donate, go to http://adoptcaribbeanottb.org/adopt/donate/ and pay through PayPal or with a credit card.

The whole idea of taking in these thoroughbreds it to give them a chance at a second career, thanks to caring owners, Ford said. “There are really good people trying to make this re-homing happen.

“We got great support after Hurricane Irma,” she said. “We were so flooded we could not even get our tractor started. We wanted to be able to do that for someone else. This could have been us and this may be us one day.”

The Puerto Rican nonprofit has six horses it hopes to re-home:

• Verset Gata – 2014 Puerto Rican-bred filly (9 races, sound and will be ready for re-training and second career once fully lets down and regains some weight).

To donate to RVR Horse Rescue, go to http://rvrhorserescue.org/donate/.