Joseph C. Podgurski Jr. passed away on January 7, 2018, at Life Path Hospice House. Joe was the husband of JoAnne Michaud Podgurski, and the father of Joseph C. Podgurski III, Norfolk, Va.  and Jeffrey Podgurski, Williamsburg, Va. He was born in Massena, N.Y. on September 12, 1947, the son of Joseph Podgurski and Beatrice Hale Podgurski, brother to Paul, John, Karen and Ellen.

Joe was in the U.S. Navy from 1967 through 1974. In 2004 Joe and his wife relocated to Sun City Center, Fla . Soon after, they met some of the founding members of The Front Porch Pickers and helped to get the group organized. Music was Joe’s passion. Joe was a member of United Methodist Church of SCC where he was a member of the parking crew and made many friends.

Joe’s memory lives on through his wife of 48 years, his sons and five grandchildren.  A service to celebrate his life was held January 13, 2018, at United Methodist Church of SCC.

William Thomas MacInnis, 89, passed away peacefully on January 15, 2018, with family at his side.

Bill was born November 10, 1928, in Newfoundland to Mary (Walsh) and Thomas Janes. A graduate of the University of Connecticut with a degree in Accounting, he retired as Vice President from Lehman Brothers on Wall Street. He recently
relocated to SSC–Sun Towers from Stamford, Conn. Bill was predeceased in 2010 by his beloved wife of 60 years, Betty Gauvin MacInnis. He is survived by his five children, Randall William MacInnis (Rita Hallman), Bruce MacInnis (Victoria Zolkiewicz), Paulette de la Veaux (Stephan), Susan Jane Stamm, and Betsy MacInnis Lundeen (David). He is also survived by his grandchildren, Thomas de la Veaux, Dianne de la Veaux (Michael Zink) and Eric MacInnis Lundeen. 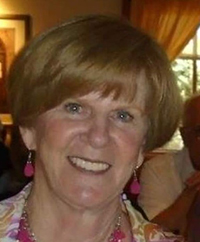 Betty Jane Canedy, 72,  passed away on January 26 after a short illness. Betty is survived by her husband Tom Canedy of Sun City Center, her sister Lois Gurule and brother John Murphy, her grandchildren Bailey Nordin, Leona Nordin, son-in-law Dan Nordin, Kelly Turczyk and other nieces and nephews. Betty is preceded in death by her daughter Donna Lynn Nordin.

Betty had a long and rewarding career in accounting at Jiffy Lube and Black and Decker. Betty participated in numerous volunteer endeavors including teaching reading to first graders at Ruskin Elementary and the Visitation Ministry at United Methodist Church of Sun City Center.

In lieu of flowers please donate to American Cancer Society.

John George Smithyman (aka “Jack” to many) was called home on December 15, 2017. One of his survivors (son, Keith Smithyman of Kennett Square, Pa.) has furnished the information below, for those Florida readers who may be unfamiliar with contributions his father made to lives elsewhere, prior to and after retirement in Sun City Center, Fla.

My father’s sojourn on Earth has been chronologically summarized, based upon three geographical locales where he lived out his first 60 years: Pittsburgh, Pa., Washington, D.C. and finally, Philadelphia, Pa. Since many of you Florida readers might be more familiar with my Dad’s story, from 1990 to the present, we “Northerners” would appreciate any additions you might share. One easy way to do so, is via a memorial website linked to the National Cremation Society location in Ruskin, Fla. Those with web access go to: http://memorialwebsites.legacy.com/JohnSmithyman/Homepage.aspx or call 855-4MYWISH. There are numerous media choices available to upload onto my Dad’s memorial page, if any of you are willing to furnish the same.  Just click “email host” to leave a secure message, if you wish us to upload any non-text media.