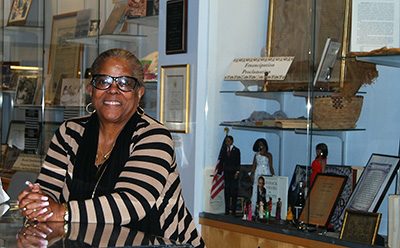 CARL MARIO NUDI PHOTO
Kathie Marsh, museum specialist for the Family Heritage House, stands in front of just a few of the display cases in the great Exhibition Hall of the museum on the State College of Florida campus.

Every year since 1976, Americans have been celebrating Black History Month during February.

It evolved from Negro History Week, which was established in 1926 to encourage the teaching of African-Americans’ contribution to the history of the country.

The Family Heritage House Museum and State College of Florida will mark Black History Month at the college’s new library and learning center with a special program and exhibit on Robert Smalls, a former slave who was elected to the United States Congress in 1874.

The opening reception for the special exhibition, “The Life and Times of Congressman Robert Smalls,” will be at 4 p.m., Feb. 6, with Manatee County resident Helen Boulware Moore, a great-granddaughter of Smalls, presenting her family’s story.

Also contributing to the event’s program will be Cate Lineberry, author of Be Free or Die, The Amazing Story of Robert Smalls’ Escape from Slavery to Union Hero.

The traveling exhibit will include 60 letters written by Robert Smalls to Booker T. Washington, Frederick Douglas, Carter G. Woodson, President Garfield and other dignitaries of his time, a replica of the musket owned by Robert Smalls, and scaled replicas of the CSS Planter and the USS Keokuk, the two ships that Robert Smalls piloted during the Civil War, according to the exhibition website.

Copies of Lineberry’s book will be offered for sale, and she will be available to autograph them.

“This will be a big event for the museum,” said Kathie Marsh, museum specialist for the Family Heritage House. “We’re honored to have the great-granddaughter of Robert Smalls speak.”

Marsh has managed the day-to-day operations of the museum for nine years.

They began collecting artifacts and papers on black history when they lived in Kansas City, Mo., and Detroit. When Ernest Brown retired, they moved back to Fredi Brown’s hometown of Bradenton.

“Some of the collection contains items from the estate of Miss Fredi’s mother, who lived to 104,” Marsh said. “She had a treasure trove of historical items.” 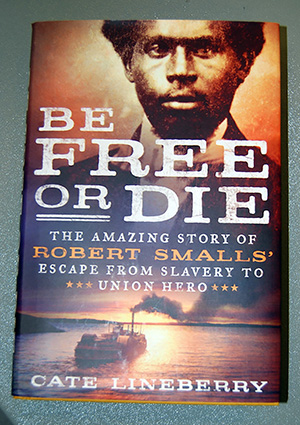 Cate Lineberry, author of Be Free or Die, the Amazing Story of Robert Smalls’ Escape from Slavery to Union Hero, will speak about her book at the opening reception of a special program and exhibit on Smalls, a former slave who was elected to the United States Congress in 1874. Smalls’ great-granddaughter Helen Boulware Moore, a Manatee County resident, curated the exhibition.

With more than 50 years of saving and gathering items relating to the African-American experience, the Brown’s collection includes displays at the museum that highlight “African heritage . . . American experiences in slavery, fights for freedom, histories of community building and education, the Harlem Renaissance, civil rights, Kwanzaa, and returns to Africa with ‘A New Day Begins: Free Elections In South Africa,’” according to the museum’s website.

The museum was originally in a portable building behind the Head Start school in Bradenton, before moving to the State College of Florida campus in 2000.

Located behind the old library building, the museum houses a family research center, an exhibition hall, an auditorium and a children’s learning center.

“The Family Heritage House Museum has shared an array of artifacts, literature, and other resources, chronicling the history and cultural achievements of African-Americans,” said Dr. Carol F. Probstfeld, State College of Florida  president.

“SCF recognizes the diversity that makes up our community throughout the year, whether it’s through our Dr. Martin Luther King Jr. Day of Service grants for projects throughout the region or our upcoming Film Festival about women athletes, it’s important to SCF to recognize contributions from every segment of our community,” Probstfeld said.

Marsh said Fredi Brown, who is 95 years old and could be found in the museum offices up to just a few years ago, would always emphasize it was an American history museum.

During her nine years at the museum, Marsh said she did not make many changes, but has tried to enhance the collection and profile of the museum.

She organized several exhibits, including in February 2015 the “Kin Killin’ Kin” traveling art show by artist James Pate, which explored violence in the African-American community.

“The artist held a community panel discussion, which was very successful,” Marsh said. “And also he spoke with several youth groups.”

Many visitors just drop in because they heard about the museum, but student field trips fill the exhibition hall and auditorium throughout the school year.

“But with the school district budget cuts, not as many have been scheduled,” said Marsh, a retired banking professional. “The churches though still bring their youth groups.”

To make the visits interesting to the students, Marsh has developed a pamphlet that describes some of the items in the museum, and they have to find the items.

“It’s like a treasure hunt,” she said. “They seem to enjoy this no matter their age, and this is a better way to learn than having me talk about the collection.”

Marsh said the number of visitors has been down with the construction of the new library, but she expects it to pick up, especially during February, Black History Month.

“We are always bombarded in February,” she said, “but history goes on all year long.”

One of Marsh’s favorite services of the museum is the family research room, which has a designated computer for the research of family history. 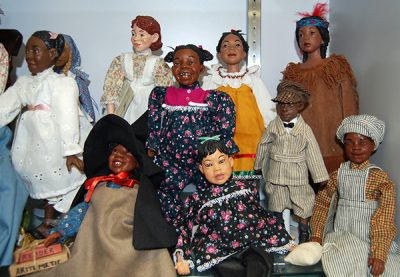 Most of the Daddy’s Long Leg dolls in the Family Heritage House collection depict African-Americans in various costumes, such as school children and American Indians. Shown are only a few of the more than 140 dolls the family of Latha Matthews Hall Draeger donated to the museum after her death.

“Visitors can use the www.Ancestry.com program for free here,” she said.

One of the newest museum acquisitions is the Daddy’s Long Legs doll collection.

The family of Latha Matthews Hall Draeger donated the more than 140 dolls to the Family Heritage House after her death.

Most of the collection of dolls, designed and made by Karen Germany, is of African-Americans in costumes depicting various occupations, such as a firefighter, a traveler and a nun.

The majority of the dolls are of African-Americans, and Draeger, who was white, often was asked why she collected the black dolls.

“Her daughter said her mother told her that when she was growing up in Palmetto her father was a foreman in the orange groves and she would go with him to work,” Marsh said.

Most of the orange pickers were black, and they also brought their children to the groves.

“She told her daughter, ‘They remind me of all the children of the workers I played with. They were my friends,’” Marsh said.

Hours at the Family Heritage House Museum are 11 a.m. to 6 p.m., Tuesday, Wednesday and Thursday.

For more information, visit the museum website at www.familyheritagehousemuseum.com or call Marsh at 941-752-5319.

This chocolate-filled event is to die for