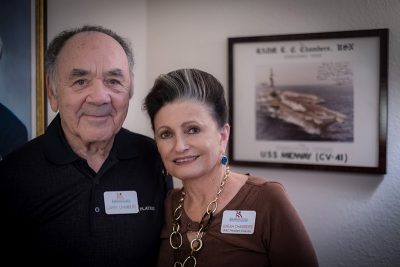 MITCH TRAPHAGEN PHOTO
Rear Admiral Lawrence and Sarah Chambers in their home at Freedom Plaza. Next month, Lawrence Chambers will receive the U.S. Naval Academy Distinguished Graduate Award, joining only two others from his Class of 1952 in that distinction.

In April 1975, Captain Lawrence Chambers was barely a month into his inclusion into one of Earth’s most rarified clubs: command of a U.S. Navy aircraft carrier. His ship, the U.S.S. Midway, was participating in what would become the largest helicopter evacuation in history during the fall of Saigon as the Vietnam War ended.

Rear Admiral Lawrence Chambers is a striking man of a number of firsts. He wanted to be a naval aviator but good fortune, perhaps fate, turned him to leadership. He was the first African-American in command of a Navy combat ship. He was also the first in command of an aircraft carrier. He was among the first to attend the U.S. Naval Academy. He is decorated and incredibly accomplished.

His father, a World War I veteran, passed away when he was just 4 years old; he was raised by his grandparents — his grandfather was the son of a slave. Chambers credits his grandparents with instilling the drive that made his accomplishments possible.

In April 1975, he was mired in barely controlled chaos. Helicopters evacuating people from Saigon were landing on his flight deck on the Midway on mere fumes of fuel. It wasn’t long before the deck was full of flightless helicopters. It was then that a Cessna Bird Dog flew low over the massive ship to drop a note. Aboard was a South Vietnamese officer who had fled the collapsing nation to save his family. Chambers saw that there were at least two small children aboard the plane. The note was a plea for help: If the crew could move some of the helicopters, he promised he could land the plane. But he was very low on fuel.

If it had just been the officer, Chambers would have told him — as an Admiral ordered him to — that he should ditch into the sea and a rescue party would be dispatched. But he knew that children would not survive that. He didn’t hesitate — he ordered his crew to push fuel-starved helicopters off the deck of the Midway. He repeated the order to be certain there were no questions and it was duly noted in the ship’s log. Within moments, crew members, even those off duty, came from everywhere to help.

South Vietnamese Air Force Major Bung Ly had never landed on an aircraft carrier before. He had no tail hook to catch the arresting wires designed to stop the jets. Chambers ordered the Midway to run with the wind, to provide a helpful headwind to do all he could for the family.

Chambers called Major Ly the bravest man he had ever met. He had no idea that the Midway was out there when he took off over the ocean with his family of not two but five children, along with his wife in the two-seat aircraft. He had no reason to believe that millions of dollars in helicopters would be pushed overboard. He left on faith. Perhaps faith in a man he was unknowingly about to meet. 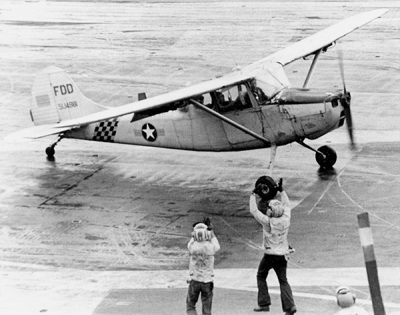 United STATES NAVY PHOTO
On April 30, 1975, Major Bung Ly, with his family aboard, lands his Cessna Bird Dog aboard the USS Midway to the cheers of the crew.

He landed perfectly, and the entire crew let out a cheer. After landing, Major Ly was invited to the Midway’s bridge where Chamber’s took off his own gold wings and pronounced Ly an honorary naval aviator.

It was a moment of incredible humanity during a time of terror and chaos. Captain Chambers made the United States and the world proud of his decisive selflessness and his immeasurable compassion. He did the right thing.

And Chambers learned something in those moments: As a superior officer, never put a subordinate into a position in which they have to disobey an order to do what is right.

When later asked why, a new captain of an aircraft carrier, he chose to ignore an admiral’s order, Chambers replied, “They may court martial me for destroying government property, but never for letting women and children drown.”

Today, the children on that Bird Dog are successful Americans. One is an attorney in Florida. All know Larry and Sarah Chambers well.

Of Chamber’s graduating class at the United States Naval Academy, two men were named “Distinguished Graduates.” Both of them were astronauts.

But it’s true: There are no run-of-the-mill astronauts.

There are no run-of-the-mill U.S. Navy Admirals.

There are no run-of-the-mill U.S. Navy Captains of aircraft carriers.

All are very small and exclusive clubs.

Next month, Chambers will join yet another, along with two celebrated astronauts from that Class of 1952, to receive the U.S. Naval Academy Distinguished Graduate Award. That is no small mention: Only three in his class of 783 have earned it. Surely many have distinguished themselves with honor. But in even the most exclusive clubs, repeatedly choosing moral courage, often against self-interest, in nearly impossible situations is rare. “Distinguished” is appropriate — because there are simply few people like Rear Admiral Lawrence Chambers. 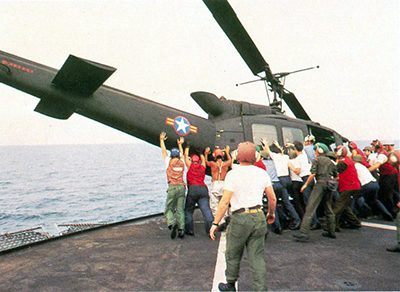 During a recent talk at the Navy War College, Chambers said, “Young folks need to be reminded to be true to themselves and to do what they believe is right. Some decisions they will have to make in their careers will not always be what their seniors would like them to make.  Regardless of the consequences, they must be true to themselves and their beliefs and have the moral courage to stand up for what is right.”

That is how he has lived his life. He expected to be court-martialed for ordering helicopters pushed overboard. But it was the right thing to do. He even pursued the U.S. Naval Academy, despite partial scholarship offers from prestigious universities such as Harvard and MIT, because he knew the money didn’t exist to send him and his brothers to college.

That day in 1975 was not his defining moment — rather, he defined it. Chambers stood tall — a leader in the military showing the entire world what it truly meant to be an American; to have the courage to do what is right. In those harrowing moments, Chambers acted as he lived — how he lived before, and has continued to live after.

Decades later, in the quiet of a beautiful restaurant at their Freedom Plaza home, I asked Chambers and his wife Sarah if the world has become too complicated to always do the right thing…if it is simply too difficult to have moral courage in these times.

“No, absolutely not,” both replied in unison.

Soft spoken and humble, Chambers could easily pass for a man three decades younger than his 89 years. There is little question that he would be a good man to be around should the “stuff hit the fan.”

Sarah, once a computer programmer on the Apollo project who moved on to ever bigger things, is ageless and striking. There is beauty in her eyes and in her demeanor; her wit is lightning fast. She carries herself naturally with incredible grace. But in her presence, too, there is an impression that if she gives an order, it will be followed. Together, they make the ultimate power couple in the strictest sense, but a most lovely couple in every sense that matters most. Both remain involved in serving their community and nation.

She calls herself her husband’s biggest fan. No doubt he, in turn, is hers.

The Naval Academy Distinguished Graduate Award selection panel seeks those who have demonstrated the utmost integrity and commitment to the nation, communities and the institutions from which they came. For this year, they chose Rear Admiral Lawrence Chambers.

Chambers has spoken to numerous groups, both military and civic, about moral courage and doing the right thing, despite the potential personal consequences. It is a message that seems needed more than ever today. The world is increasingly complicated — but doing the right thing remains the same. Often it means putting others ahead of yourself. Rear Admiral Lawrence Chambers has spent his entire life doing just that.