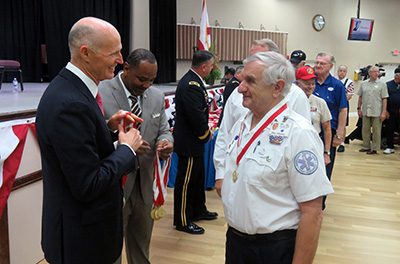 BILL HODGES PHOTO
U.S. Navy veteran Mike Albanese chats with Governor Scott at the SCC Community Hall. The governor began the Governor’s Veterans Service Award program in 2014 and is presenting awards personally around the state. According to organizers, the SCC event was the largest they have had; 628 awards were presented.

The governor created the GVSA program in 2014 by executive order. Since then, he has been visiting communities around the state to personally present the awards. The event lasted three hours, and most of that time was spent presenting the awards. It was a standing-room-only crowd, with 628 veterans receiving medals and many friends and family members present for the occasion.

The governor’s remarks were brief, which attendees described as “concise (10 minutes or so), apolitical and heartfelt.” Several commented that they felt Governor Scott kept the focus on the veterans—not him. The standing ovation he received expressed appreciation for the recognition they were receiving. A resounding impression, even with the large attendance, was that the veterans never felt rushed, either during the registration or while receiving their awards. Governor Scott presented each award himself, taking the time to shake hands and chat with each of the recipients.

Carter said he appreciated the work of Ed Barnes and Paul Wheat in bringing the event to Sun City Center. He said it was through their efforts and the cooperation of many local organizations that the governor’s visit went off without a hitch.

Both Barnes and Wheat were pleasantly surprised by the resounding success of the event. They gave due credit to local media and military groups for “spreading the word” to south county veterans, and to the SCC Community Association leadership and staff for providing space and assistance. They also sent kudos to commercial organizations that provided transportation and support to veterans in wheelchairs and walkers and to the local DAR and American Legion Auxiliary for their help. “This was truly a community affair, and the results reflected the respect the community has for its veteran members. This was one day where all of the veterans were winners and heroes,” said Barnes. Wheat agreed and added, “Personally, it was one of the most satisfying events I have been involved in from start to finish.” That’s saying a lot since both Wheat and Barnes are extremely active, both in civic and military affairs.

Veterans who missed the ceremony and want to inquire about getting a medal can contact Lee Ann Sferrazza-Rios, the public information officer, at 727-518-3202, ext: 5572, or email: Sferrazza-RiosL@FDVA.STATE.FL.US and she can advise.

Photos from the Jan. 23 ceremony will be posted online in February at: www.flgov.com/gallery. When at the site, click on the heading “Photos from around the State” and then “Governor Rick Scott Photos.”