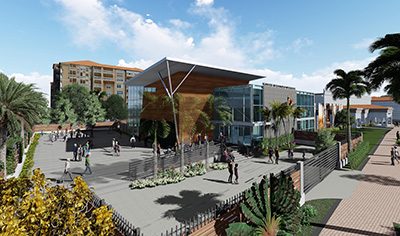 ARCHITECTURAL DRAWINGS PROVIDED
An architectural drawing shows the North Education Complex, which will include the Mosaic Backyard Universe, as well as two new classrooms, administrative offices, a lobby, multipurpose learning spaces and an outdoor setting for programming and events.

Palmetto resident Laurie Voight remembers when she was a young girl riding in the family car over the Green Bridge into Bradenton and seeing the South Florida Museum building.

“It was always there,” said Voight, who has a five-generation history in Manatee County.

Community leaders founded the South Florida Museum in 1946. The original museum opened in 1947 on Memorial Pier in Bradenton, and in 1966 it moved to its present location, 201 10th St. W., at the foot of the bridge that connects the Palmetto and Bradenton downtowns.

The museum has been a generational touchstone for the community.

“We are a regional institution serving schools in a 10- to 12-county area,” Besio said.

Besio said the museum was not only important for it’s educational programs, but also as a tourist destination.

“The museum is a piece of the (tourism) puzzle,” she said. “In the two-county area (Manatee and Sarasota counties) there’s Selby Gardens with their orchids, Mote Marine Laboratories for marine science, The Ringling for art, the county historical villages, and we have natural history,” she said.

Along with the natural history component of the museum, the Bishop Planetarium and Parker Aquarium also are big tourist draws.

The visitor popularity persuaded the South Florida Museum board of directors to consider expanding the educational component of the museum. 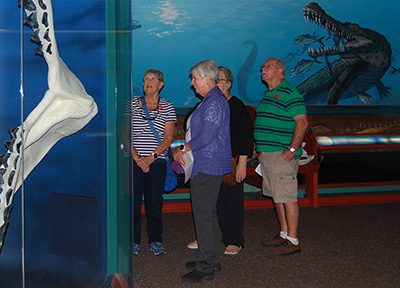 The museum administration and local community and business leaders broke ground Jan. 16 on a 12,600-square-foot construction project of new and renovated classrooms and exhibition space and 15,300 square feet of outdoor space.

The showpiece of the expansion project will be the Mosaic Backyard Universe, funded in part with a $1.3 million grant from Mosaic, an area phosphate mining company.

“The idea for the expansion came from Mosaic,” Besio said. “The staff of the museum wanted to expand Discovery Place.”

But when Mosaic was approached for some funding to upgrade Discovery Place, a hands-on room filled with learning objects and games, decorated with posters and murals, the museum administration was told to “think big,” she said.

“What can we do for the early learners was a staff idea, when the backyard concept finally took form,” Besio said.

Along with the City of Bradenton’s donation of the land immediately north of the museum, more than $14 million was raised through grants and donations.

The Mosaic Backyard Universe will create a learning environment for children in pre-K through the second grade.

The exploration space took its name from an area where many children grow up learning about their environment, the backyard.

Children will learn about nature through typical elements found in a backyard, such as rocks, soil, water, living plants and animals.

The centerpiece of the Mosaic Backyard Universe will be a 30-foot-tall oak tree where children can count the rings to see how old it is, or look inside the trunk to see how water is transported to the leaves, or listen for the sounds of birds or squirrels that may live in its branches.

The expansion also includes the North Education Center with the new and renovated classrooms and exhibition space.

The classrooms will be used for the summer camp programs, and for the Ballard Elementary School satellite VPK program now being held at the museum.

The construction was expected to take 14 to 18 months to complete.

A nationally known company, dmdg2, was designing the new space, with local architectural firm, Fawley Bryant Architects, as the architect of record, managing and leading all phases of design.

Willis A. Smith Construction, Inc., of Lakewood Ranch, is the building contractor.

Voight, who is the community engagement associate at the museum, said through the years she and her children will have different experiences at South Florida Museum.

When she was young and going to visit Snooty, who passed away last year, the manatee was living in a small pool and now there is the Parker Aquarium.

“My son, Levi, at 11 is able to enjoy the museum as it is now, but the expansion is adding so much more to the experience for my 3-year-old daughter Evelyn and 4-month-old son Maverick,” she said.

Voight said her experiences at the museum have stayed with her throughout her lifetime.

“I remember being a little frightened of the display of the bison hunters,” she said. “It’s a little intimidating to a little girl.”

But the Bishop Planetarium was where she enjoyed spending a lot of her time when visiting the museum.

“I was impressed with the giant star ball in the middle of the room,” Voight said.

The star projector was replaced during the remodeling after a fire destroyed the planetarium in 2001.

“My favorite show was about the seven sisters star cluster, the Pleiades,” said Voight, who earned her Girl Scout astronomy merit badge at the museum.

And her planetarium visits served her well throughout her life.

“I grew up sailing with my family and was able to apply these things about astronomy to life experiences,” she said.

The Bishop Planetarium has become a big favorite to museum visitors. 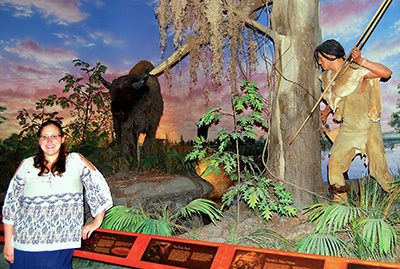 CARL MARIO NUDI PHOTO
Laurie Voight, community engagement associate at the South Florida Museum in downtown Bradenton, stands in front of a diorama depicting indigenous natives hunting a bison. As a child, Voight would visit the museum with her family. She now brings her children to the Manatee County generational institution.

“Everyone loves the planetarium,” said Jessica Schubick, the museum’s communications manager. “They love the live astronomy shows and the digital movies.

“It’s not unusual for people to come (to the museum) to see the manatees not knowing there is a planetarium,” Schubick said, “But after visiting the planetarium they learn something about the planets, and they are amazed.”

“It’s an opportunity to envelop oneself in another world,” Voight said. “This is very empowering for a kid as a learning experience.”

She said her son Levi was in many summer camp programs at the museum through the years and learned a lot about astronomy.

“He was able to tell his friends about the stars they were looking at during camping sleepovers,” she said.

“And my daughter Evelyn loves the manatees,” Voight said. “She sits for hours by the window watching them swim by.”

The focus of the Parker Aquarium as a manatee rehabilitation facility has intensified since the loss of Snooty.

The South Florida Museum joined the Manatee Rehabilitation Partnership in 1998, which provides rehabilitation for sick or injured manatees until they are ready to be released back into the wild.

“We couldn’t have asked for a more experienced person to bring our manatee rehabilitation program into the future,” said Schubick. “Virginia has worked with the Manatee Rehabilitation Partnership and sees what the Parker Aquarium’s needs are and will work to grow the program to meet those needs.”

Edmonds had worked at Lowry Park Zoo in its manatee rehabilitation program and is a former co-chair of the partnership group.

She serves on the Manatee Rehabilitation Partnership Manatee Release Committee.

“Virginia is the perfect person for the job,” Schubick said.

For more information about the South Florida Museum, visit its website at www.SouthFloridaMuseum.org or call 941-746-4131.