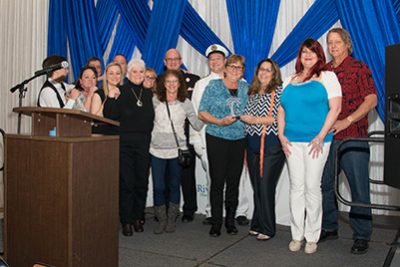 Superior Residences of Brandon Memory Care received the large Business of the Year Award from the Greater Riverview Chamber of Commerce for 2017 during the chamber’s annual banquet Jan. 19.

Coastal Catering received the award for businesses with up to 20 employees and South Shore Insurance Professionals received small Business of the Year for companies with five or fewer employees.

The Regent was transformed in to the “Member Ship” for the event with table sponsors decorating their tables in nautical themes, from sailing ships to underwater reef scenes. Guests donned sea captain costumes and cruise attire to go along with the theme.

Joe Eletto made his way on to the stage to receive the Ambassador of the Year award from the chamber. Ambassadors play an essential role in member recruiting, communication and retention. They lead by example, listen, promote and attend chamber events and ribbon-cutting ceremonies.

Jerry Rothstein took home the trophy for Volunteer of the Year. He is a member who reached above and beyond all expectations of volunteering his valuable time, emcee Jim Smeaton said. The award, he said, is presented for genuine dedication “to make a difference and often extends a hand of help to others to be successful.”

Shirley Bhat was named Shining Star of the Year as someone who shares her talents and time and “brightly displays their community spirit,” Smeaton said. She is also a recent chamber member, a requirement for receiving the Shining Star award. 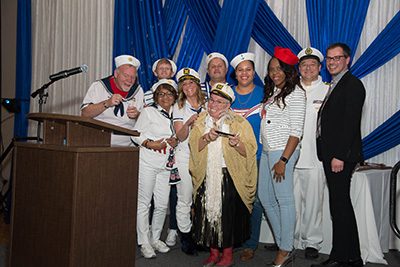 Superior Residences of Brandon Business of the Year (over 20 employees)

Riverview veterinarian Kimberly Tyson was named the chamber’s Citizen of the Year for representing the “spirit of the community.” Tyson grew up in Brandon and graduated from Brandon High School and the University of Florida. She is known throughout the region as a champion for animals and someone who gives back to her community regularly. She hosts Yappy Hour monthly to fundraise and shine a light on animals that need homes and care.

“Thank you, everyone here for the successful year that we had,” Heath said. “We got some great people who stepped up and helped out.”

Heath, too, leads by example, said Hillsborough County Commissioner Stacy White. He presented Heath with a commendation from the county commission for his exemplary leadership as 2017 chamber president.

Smeaton, who grew up in Riverview, said it is pretty amazing to emcee a crowd of more than 300 for the Greater Riverview Chamber awards.

“I remember us meeting in the Riverview Civic Center with 20 to 30 people. Tonight, we have 343 in attendance,” he said.

“I remember Riverview when people laughed about it,” Smeaton said. “Then, they widened (U.S.) 301 and everyone said ‘Hey, Riverview,’ and here we are.”

In addition to presenting the major awards last week, the chamber members present voted on their favorite table decorations. The award went to Superior Residences of Brandon Memory Care for their “Good Ship Lollipop” theme table.

The Greater Riverview Chamber of Commerce currently has 665 members.

For more photos see the Jan. 25 edition of the Riverview Observer News.