In Riverview: A Night at the Races 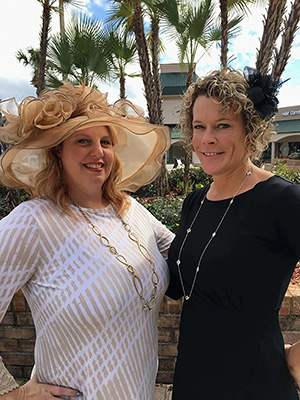 SUBMITTED PHOTO
Heather Michael of Salon Jennifer & Co., director and event coordinator for the Riverview Woman’s Club, and Julie Dahl of Riverview Mortgage and event chairperson for Night at the Races

Dust off your Derby duds.

It may not be May, but the Riverview Woman’s Club is hosting a Night at the Races in February to raise money for college scholarships for local youth.

And yes, there will be costume contests for both men and women, so slap on your biggest hat or design one yourself, dig in the closet for that vest and bow tie, and head to Summerfield Crossing Golf Club Feb. 17 from 6 to 10 p.m.

Races will be shown on a big screen, with Dennis Napoli, who hosts race parties regularly, calling the races.

“This will be the first time the Woman’s Club has put something like this on,” said Club President Michele Wirth. “A couple of people helping us have done this before, so we expect it to be a huge success.”

The club’s goal is to fill 100 slots for this event, with money going to local high school students as college scholarships. “We hope to raise a minimum of $5,000, because that would cover those scholarships,” Wirth said. “But if we raise $10,000,” the club will also begin to sponsor someone in the community who has gone through a tough situation and is attempting to get back to school.

“We have some sponsorship opportunities as well,” Wirth said. “If you are a table sponsor, you get two horses and eight seat tickets for $300. You will have your name on the table, as well. You could sponsor a race and that is $100, and if you do that, your name, logo and information will appear in the program for that race as well as on the screen where the races will be shown.”

A dinner of chicken Marsala and trimmings, along with dessert, is included in the ticket price. There will be a cash bar.

“We are going to have a backdrop when you come in and a pink carpet, and you get free photos with a paid admission to the event,” said Event Coordinator Heather Michael. “We are going to be full-on derby style (as in Kentucky Derby). In addition to the costume contests, we may have some other contests, also.”

There will be 10 races, and those who have the winning horses will receive prizes, Michael said. The final race will be based on a silent auction where participants will bet on their horse. “If you love number 7, you’ll bid on that, and you can also get the privilege of owning that horse. If your horse wins, you split the pot. It’s like a big giant 50-50.”

There will also be a blackjack table where guests can play with “funny money,” she said.

“We are always striving to get to the point where we have enough money to have a scholarship fund for an adult, like a woman coming out of a difficult situation who would like to go back to school,” Wirth said.

The Riverview Woman’s Club has two major fundraisers each year, but also gets involved in other community activities. Some of its members recently volunteered for a senior Christmas party, and members mentor students regularly at Rogers Middle School. The club has about 35 active members.

To get tickets for a Night at the Races, go to www.riverviewwomansclub.org.