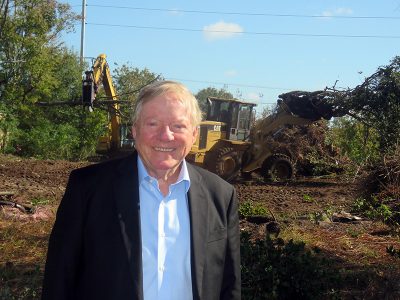 The bulldozers are busy readying the construction site for expanding Stanley Whitcomb’s Commonwealth Office Park on East Del Webb Boulevard in Sun City Center.  The current activity is part of Whitcomb’s plan to develop the 10 acres he owns north of Publix. At one point, Whitcomb owned all the property from S.R. 674 to St. John the Divine Episcopal Church, bordered by East Del Webb Boulevard and U.S. 301.

The last of the seven tenants in Phase 1 of the park’s four-building complex moved in six months ago. Phase 2 now underway includes two new buildings, one 10,000 square feet that will face U.S. 301 and one 5,500 square feet fronting East Del Webb Boulevard. Both are expected to be completed this summer. Space in the larger building is already filled; in the smaller building, 2,000 square feet are still available.

When these two buildings are completed, activity will likely begin quickly on Phase 3 for a second 10,000 square foot building. That parcel is now being zoned.

Whitcomb said that planning is still underway for the remaining acreage adjacent to the church, but no decisions have been made. He declined to comment on rumors that an assisted living facility will be built there, other than saying it was a possibility if sufficient demand is indicated.

About the golf cart path to Walmart that goes through the property, he said that SCC residents need not fear its removal. When an easement was sold to the county, a provision was included that ensured the path’s continued existence.

For those familiar with Sun City Center’s history, the Whitcomb name is a familiar one. After the First National Bank of Chicago purchased the development rights to Sun City Center in 1976, they put Whitcomb in charge of continued development to protect the bank’s interests. (The FNBC held the mortgages for both SCC and Kings Point after the previous developer, Walter-Gould Development, bought out Del Webb in 1972.)

Whitcomb managed SCC’s growth under the name W-G Development for the following five years. He chuckles when relating an incident during that time when he arrived late and went to one of W-G’s model homes for the night. Unfortunately, the garage door had the same frequency as the one next door. When the neighbor’s door and that of the model home both opened, they phoned authorities who promptly kicked Whitcomb out because he was under 55.

Whitcomb has made significant personal investments in SCC. In addition to the property currently under development, he still owns South Bay Medical Arts Center on Upper Creek Drive. He also owns the Center Plaza Building by the post office, which houses several tenants as well as his management company, RealTec Realty.

It’s fair to say that Whitcomb has seen a lot of changes since the ̓70s. Asked what comes to mind when reflecting on social changes, he recounted that drivers in the early days made wide right-hand turns because they were remembering days of no power steering. Also, residents here “wouldn’t be seen in a foreign car,” which he attributes to the fact that many were veterans. “At one point,” he said, “Sun City Center was the second largest Cadillac community in Florida after Miami.”

“It has been fun,” Whitcomb said about his Sun City Center involvement. He visits often since he maintains a SCC office and a Tampa home where he and wife Jaynie spend their winters. In the summer, they live in Brevard, N.C. — in Connestee Falls, a community he developed some 45 years ago.