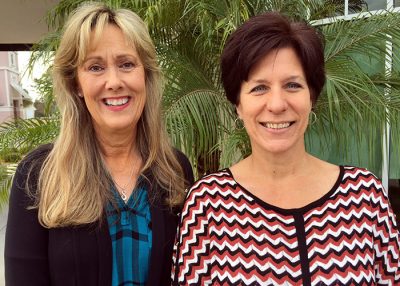 A new nonprofit group based in Apollo Beach hopes to shed bright light on the opioid crisis and provide support to those impacted by it.

The C.A.T.E. Foundation (Conquering Addiction Through Education) will open the Community & Recovery Resource Center at 5942 Frond Way by Jan. 15 to offer education, resources and referrals to folks who are addicted to opioid drugs and have successfully completed some sort of treatment within the past year. The same support also is offered to those affected by their addictions.

“The relapse rate is almost 90 percent for those who come out treatment and have no support system,” said Tina Patch, C.A.T.E Foundation president.

Her 27-year-old daughter began using opioids when the drugs were introduced to her by a former acquaintance 10 years ago.

“After going through hell for about seven of those years, I had to resort to drastic measures, including incarceration,” Patch said. “My daughter graduated all the way to heroin, as most opioid addicts do, and kept overdosing. I was finally able to get her into treatment in October.”

Her son overdosed on opioids in October 2016. The unspeakable pain she felt gradually gave her the impetus to help other parents avoid going through the same experience.

“He was a wonderful person, who became addicted to pain pills as a teenager after a snowboarding accident,” Iafelice said.

Oxycodone started it all, and after six months on the drug, when he couldn’t renew his prescription, he began buying oxy and additional drugs like Xanax and Dilaudid from friends, even drug dealers. Eventually that led him to heroin.

“Those drugs changed my child’s brain to where it couldn’t function without them,” Iafelice said.

Every member of the C.A.T.E. Foundation Board has been impacted in some way by opioid abuse, so the organization’s mission is also a personal one.

“Opioid addicts need support for up to a year after a stint in rehab for the brain to return to its normal functioning,” she said. “There are little or no after-care services available to most addicts.

“They come out of rehab, don’t have a job, have a criminal record (in many cases) and little support or coping skills,” she added. “That’s why we started the foundation.”

Addiction is invisible for awhile

Karlinda Heims, a retired police officer who lives in Sun City Center, lost her 23-year-old daughter, Danielle, to a heroin overdose in 2015.

Heims had been prescribed opioids for chronic pain but never took them; however, Danielle, who had become addicted to painkillers prescribed after a tooth extraction, breast reduction and car accident over a couple of years, did. Unbeknownst to Heims, her daughter also began taking her mother’s supply.

When Heims and her husband discovered their daughter’s addiction, they put her in a 10-day detox program and a follow-up outpatient program twice.

But after the second relapse, the process was repeated in a 90-day program in Tennessee.

“She did great,” Heims said. “We found her a sober-living house and outpatient program in West Palm Beach. During her stay, she experienced a couple of triggers, and a guy she met in her NA meetings provided her with drugs just one-day shy of her six-month clean-and-sober date.”

“I get a lot of calls from adult children who are worried about their senior parents who are taking opioids for chronic pain, and parents of children who have been prescribed opioids after a tooth extraction or low-risk surgery,” she said.

Many doctors are very responsible in prescribing opioids and benzos (benzodiazepines), but others are not, she added. Physicians aren’t trained to look (thoroughly) at family history, patient history and the gap in standards of practice between subscribers.”

And, as in the case of Heims, relatives can unwittingly contribute to the problem.

“In our community, the pharmaceuticals of grandparents are being taken by their children (or grandchildren). It’s very sad,” Lively said.

Patients must take added precautions when prescribed painkillers like oxycodone, hydrocodone, methadone and codeine, she continued.

“They must be very, very aware of how addictive these drugs are and their own propensity for addiction,” she said. “And they should never take more than prescribed.

“They must also be willing to have an open conversation (about the use and potential abuse of opioids) with the pharmacist and their doctors, and use only one pharmacy for everything.”

Residents are invited to learn more about the C.A.T.E. Foundation from 1 to 8 p.m. Jan. 27 during a fundraiser in the Special Events Hall at The Barn at Winthrop, 11349 Bloomingdale Ave., Riverview. The event will include food, vendors and a silent auction.

And in February, the foundation will offer free meetings at its Community & Resource Center in Apollo Beach for anyone coming out of rehab after addiction to opioids, Dates and times will be posted at www.2cate.org.

At Gamble Creek Farmer’s Market, produce is as fresh as the morning

A bond over beer: Couple to open craft brewery in Riverview