At Gamble Creek Farmer’s Market, produce is as fresh as the morning 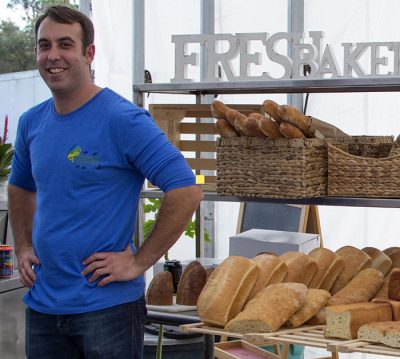 PROVIDED PHOTO
Teddy Louloudes, who heads the bakery at the Beach House restaurant where all the breads and desserts are made for the Chiles Restaurant Group, has been supplying the baked goods and pies sold at the Gamble Creek Farmer’s Market.

Produce picked right off the plant is as fresh you can get.

If you have a backyard garden you need to just walk out your door for fresh vegetables.

But you also can go to The Gamble Creek Farmer’s Market in Parrish where much of the produce being sold was picked that morning.

The market is under a very large canopy tent in front of the vegetable and fruit fields of Gamble Creek Farm, 14950 Golf Course Road, where you will find a variety of items, such as freshly picked collards, chard, three kinds of kale, different varieties of squash, red and green cabbage, and broccoli — all certified organic.

“We had our grand opening on Nov. 18,” said Eric Geraldson, who with his son, Ryan, operates the farm and market. “The response from our neighbors has been very positive.”

Chiles said he started buying locally 38 years ago the fish and other seafood he serves at his three restaurants, The Sandbar in Anna Maria, Beach House in Bradenton Beach and Mar Vista in Longboat Key.

Then about four and one-half years ago Chiles learned that the 25-acre Gamble Creek Farm was available and with the Geraldson’s help, he began getting most of his produce for the restaurants locally.

“It’s important to try to move the country to sustainability for a number of reasons,” Chiles said “It helps the local economy, saves on transportation costs, and the produce is fresh.”

“We’re excited about having the market,” said Chiles, adding that it takes a lot of planning and work.

“Just doing the farm project was ambitious,” he said. “Now we added the market.”

Eric said much of the produce at the market came from the fields right behind the canopy tent, depending on the season and what he planted.

The produce and fruits not grown on the Gamble Creek Farm come from other area farmers.

“We have a good variety of fresh, local vegetables and fruits,” Eric said. “We also sell local eggs, honey from hives on the property, jams and jellies, and fresh breads and baked goods.”

He said a big seller at the farm stand are the squash blossoms.

“Not a lot of markets have them,” Eric said.

“I’m surprised how well squash blossoms have done,” he said. “They’re popular even with the public.”

“The blossoms are an example of “the farm-to-table model we try to provide to them,” Ryan said. 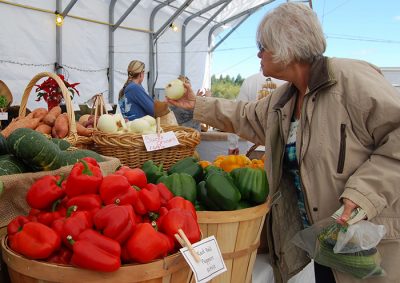 CARL MARIO NUDI PHOTO
Cheryl Stuart, who lives in the nearby Twin Rivers neighborhood of Parrish, picks out some onions at the Gamble Creek Farmer’s Market. Stuart said she is familiar with the quality of vegetables the Geraldsons sell because she has been purchasing produce from them for 50 years, when they had a farm and stand on Perico Island.

“They are picked in the morning, go to the restaurant, stuffed with ricotta cheese, and on the diner’s plate that night,” he said.

“We’re committed to make our local farming project work,” said Chiles, “and the farm stand is the logical next step.

“And with all the development popping up out that way, we hope it will succeed,” he said.

For Shirley and Robert Storo, who live in the nearby Foxboro neighborhood of Parrish, the farm market is a great success.

“This little tent has a lot of stuff in it,” said Robert. “It beats going to the grocery store.

“The prices are good and it’s a lot fresher,” he said.

“It’s close to home,” she said, “with very good prices and everything is very fresh and better quality.”

The mother of two children, Samantha, 16, and Ryan, 12, said the variety of produce helped her decide what to make for dinner.

She said she was going to cook the sweet potatoes and beets with grilled chicken.

When her husband spotted the jalapeno peppers on the end of the table stand he was inspired to purchase some and make his specialty — smoked, stuffed-jalapeño peppers.

“Clean all the seeds out so the peppers are not too hot.” she said. “Stuff them with cream cheese, roasted garlic, and cheddar cheese, and then wrap them in bacon, then put them in the smoker.”

Visitors to the Gamble Creek Farmer’s Market will soon be learning a lot of new recipes.

“We’re planning on holding chef demonstrations on Saturdays where they cook with items grown on the farm,” said Eric.

He also said shoppers could get baking tips from Teddy Louloudes, head baker at Chiles’ restaurants, when he stops by the farmer’s market. 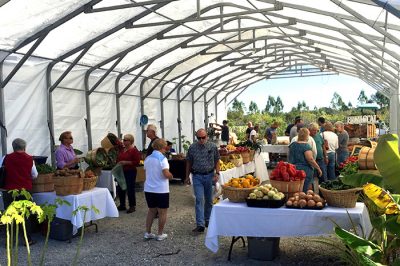 PROVIDED PHOTO
Since opening in November, the Gamble Creek Farmer’s Market has become very popular with the public.

Louloudes, who heads the bakery at the Beach House restaurant where all the breads and desserts are made for the Chiles Restaurant Group, has been supplying the baked goods and pies sold at the market.

“Teddy has a passion to bake,” Chiles said. “In the three years he’s been with us, he’s done fantastic.”

Chiles said Louloudes started working at the Beach House when he was 15, then went off to Florida State University to earn a finance degree.

After working in the financial world, Louloudes, with Chiles’ encouragement, decided to follow his passion and went to culinary school.

He worked at several big-name restaurants around the country and then approached Chiles about doing the baking for the three island restaurants.

“Teddy started at the Beach House with a four-foot table in the kitchen,” Chiles said. “Now he has a complete bakery we just completed in 2017.”

The farmer’s market was just another stage in Chiles’ sustainable project, he said.

“If you pick up the sustainable-food practice, you will pick up other sustainable practices, such as composting, which we’re looking into right now,” Chiles said.

“We’re talking about a biodigester to produce methane to operate the farm equipment,” he said.

“This lets us leverage what we are doing on the sustainability front,” Chiles said. “It lets us speak with a louder voice.”

For more information on Gamble Creek Farm and the Farmer’s Market, email Caryn Hodge at chodge@chilesgroup.com or call 941-713-3105.