“The Food Network became interested when we told them about the Kiwanis corn dog,” Fair Manager Dan West said. “The recipe for the corn dog is kept in a vault, and only a couple of people know the whole recipe.” 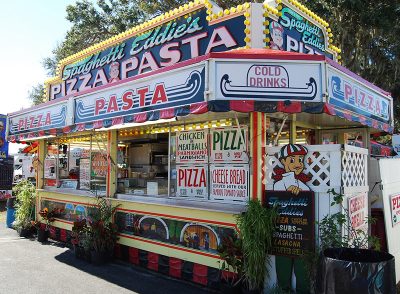 CARL MARIO NUDI PHOTO
Food at the 2018 Manatee County Fair is one of the big attractions. The Food Network will be filming an episode of “Carnival Eats” during the fair.

It may not seem that a year has already passed since the last Manatee County Fair was held, but with the new year comes a new fair.

“This year’s theme is Good Food, Good Rides, Good Times,” said Dan West, fair manager. “We want everyone to come out and see what Manatee County has to offer.”

Palmetto Mayor Shirley Groover Bryant said her city was always excited and proud to be the host city of the fair.

“The Manatee County Fair highlights everything that makes Manatee County great and gives citizens from all over the county an opportunity to put their very best on display in arts and crafts, baked goods, plants, and livestock,” wrote Bryant in an email.

“Where else could anyone possibly go to see such a diverse group of young and old alike share their skills and projects in one place?” said the mayor, who also serves as an emeritus director on the board of Manatee River Fair Association, Inc., organizers of the county fair.

West said planning for this year’s fair, just as all past fairs, began as soon as last year’s fair closed.

“People ask me jokingly what I do for the other 50 weeks of the year,” he said. “It takes a whole year to plan for the next event.

“We have to have everything ready to go the day the fair opens,” said West.

The directors meet in March and discuss what went well, what needs to be changed, and what new should be added, he said.

There are several new things planned for this year’s fair. 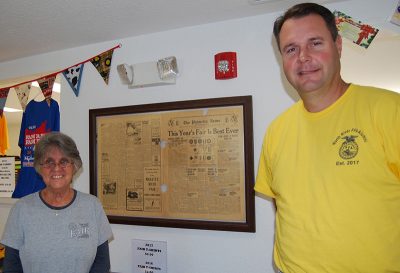 “For the first time this year we will have a (U.S. Armed Services) veterans’ parade,” West said.

Veterans are asked to assemble at the north end of the fairgrounds at least 15 minutes before 6 p.m., Jan. 16, to parade a short distance to the entertainment tent where there will be guest speakers.

“PalmettoBuild, a coalition of Christian organizations, will sponsor free night for the fourth year,” West said. “They buy out the gate and everyone gets into the fair for free.”

Also new this year, the annual pageant to pick the Fair Queen and her Court for this year was held on Oct. 14 instead of during the fair.

The earlier date was set because in the past, several of the contestants had to make a choice of showing livestock or competing in the pageant, West said.

But each contestant will receive a Manatee County Fair Pageant T-shirt and a pair of entry tickets for the 2018 Fair Pageant “Contestants Day” on Jan. 13.

There also will be a couple of new food vendors, one serving Fried Banana Splits, and the other Cracker Billy’s Seafood.

And the Food Network will be at the fair to film an episode of “Carnival Eats,” with show host Noah Cappe.

“They became interested when we told them about the Kiwanis corn dog,” West said. “The recipe for the corn dog is kept in a vault, and only a couple of people know the whole recipe.” 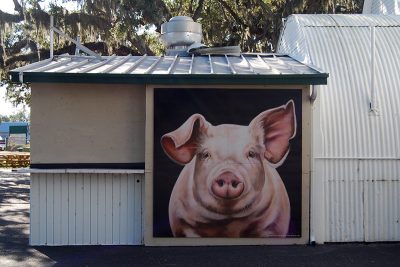 One of the large murals on a livestock building is one of the new additions at the fairgrounds.

West said for the good rides, Belle City Amusements will have heart-stopping amusements such as the Drop Zone, the Moonraker, the Scrambler, and many more on the midway, as they have for many years in the past.

“The midway is a very popular part of the fair,” he said. “The older kids like the fast ones, but we have plenty of rides for the younger ones.”

And there will be fun rides in the special children area.

Many people come to the fair just for the musical acts that are booked.

This year the country band Shenandoah, appearing on the main stage as part of their 30th Anniversary Tour, will kick off the headliner entertainment on Jan. 12.

On Jan. 14, contemporary Christian rock singer Colton Dixon will perform, and singer-songwriter Phil Vassar will be on stage Jan. 19.

“And of course, in between, great local acts will perform,” West said. “There will be 11 days of fun-packed entertainment.”

County fairs are known for their blue-ribbon winners in arts and crafts, and the Manatee County Fair will have its share of winners.

Local residents will be entering their best examples of basket weaving, ceramics, embroidery, and more than a dozen other hobby and craft items.

Two new divisions, Horticultural Crafts with Roots and Horticulture Crafts Without Roots, have been added.

In the popular culinary arts and food category, some of the best cooks in the county will be entering their specialty, with mouth-watering delights such as breads, pies, cakes and casseroles.

And then there is the fine arts category where artists present their best painting, sculpture, photography and other art pieces.

“The Manatee County Fair gives its citizens an outlet for developing skills and talents and is a place for Manatee County youth to learn responsibility and to take pride in the product of their work,” said Mayor Bryant.

Of course there will be plenty of livestock shows at the fair.

“There are about 600 entries submitted to show livestock,” West said. “We have one of the largest livestock shows for a single county in Florida.”

Area youth will show their results in raising such animals as swine, goats, chickens, rabbits and steers.

“It’s a real testimonial to the FFA (Future Famers of America) and 4-H programs in our county,” West said. 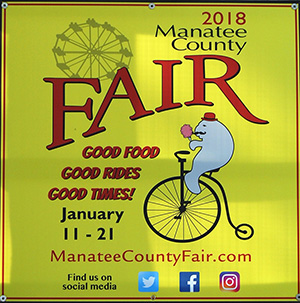 A sign at the fairgrounds in Palmetto announces the 2018 Manatee County Fair.

Mayor Bryant said holding the county fair in Palmetto gives her community a chance to shine.

The Manatee County Fair has been a county tradition ever since it began on Feb. 28, 1916.

The first fair was held in Bradenton, but moved to Palmetto in the 1930s.

“Holding county fairs is one of the oldest things we still do as communities in America,” West said. “The first agricultural fair was in 1807 in Pittsfield, Mass.

Since then it has grown to more than 3,000 fairs in North America, according to The International Association of Fairs and Expositions website.

“Part of our tradition is where we like to come together,” West said. “You can see all the folks you went to school or grew up with, and even though the county has grown by leaps and bounds you have good shot of seeing these people at the fair.”

He said the county fair also is a time when the community all work together.

“It takes hundreds of volunteers to put on the fair,” West said. “This brings out the best in us.”